Contribute Now
Ad
For the “govindas” of western Maharashtra, forming multi-storeyed human pyramids on the festival of Janmashtami has been a serious competitive endeavour for decades. At stake are lakhs of rupees in prize money offered by politicians and businessmen for groups of govindas that can break the dahi handi, or curd-filled claypot, strung high above the streets. To earn a crack at the reward, as the govindas will do when the festival is celebrated on September 5 this year, the human pyramids can rise as high as eight or nine tiers.

But this isn't without its problems. Each year, scores of participants are injured in the crush of collapsing bodies – and many people have been alarmed by children as young as seven or eight being allowed to form the uppermost tiers of these astonishing human formations.

In an attempt to impose some regulations  to a tradition that has grown as controversial as it has commercial, the Maharashtra government last fortnight formally declared Dahi Handi an adventure sport. It prohibited the participation of children below the age of 12, though it did not restrict the height of the pyramids. 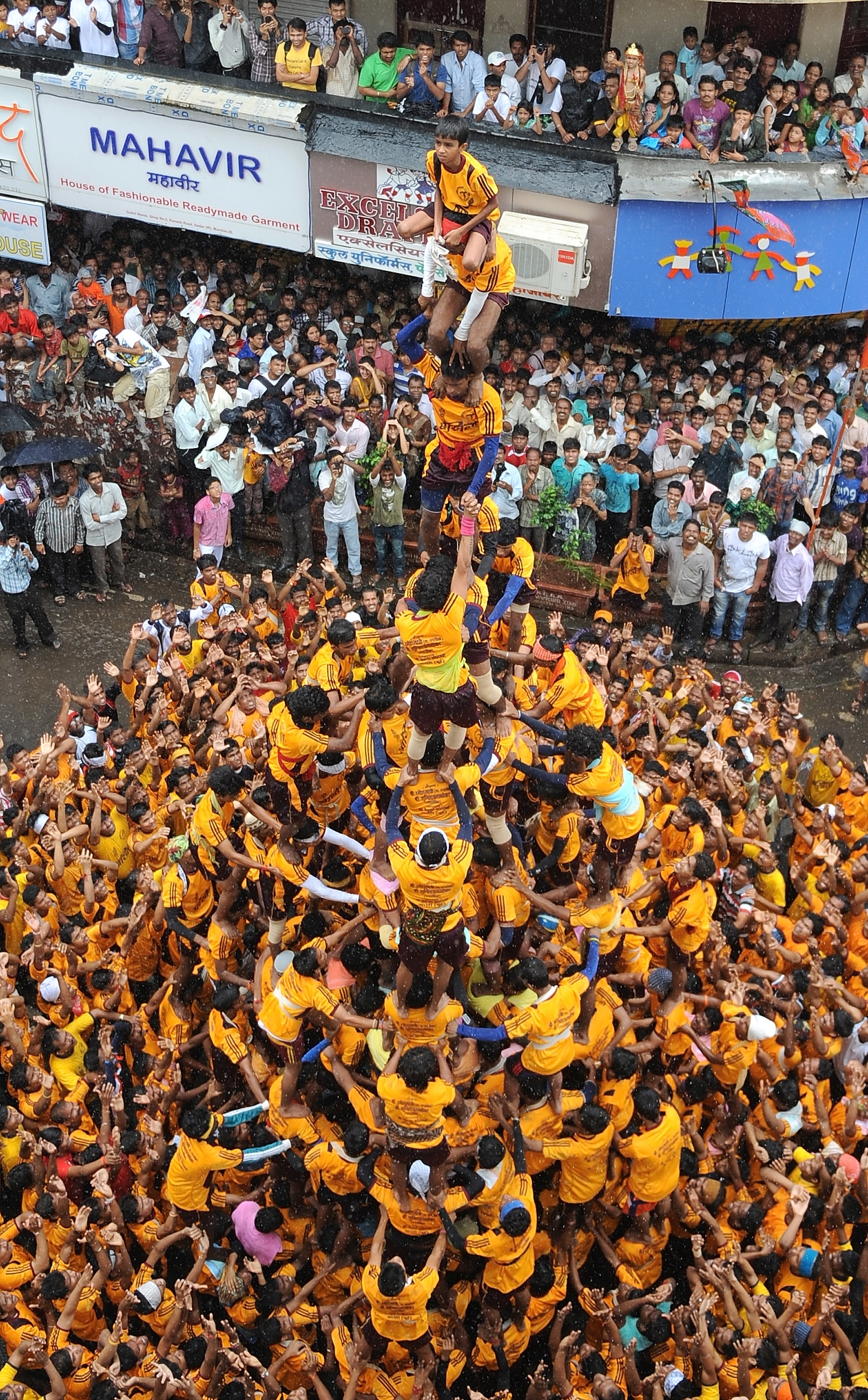 As an adventure sport, organisers will get to host Dahi Handi events all through the year, but improved health and safety measures for govindas will now be mandatory.

Despite this, govinda teams and competition organisers have been increasingly unhappy over alleged confusion about the rules. It will be a while before regulations for the adventure sport are formalised, but for this year's festival, govindas claim there is a 20-ft cap on the height of the pyramids, which would restrict them to just four tiers. In the past two weeks, at least three major Dahi Handi organisers have chosen to cancel their events for September 5 as a means of protest.

Govinda teams are equally disgruntled. “The lower age limit should be at least nine,” said Arun Patil, vice president of Mumbai’s Dahi Handi Coordination Committee and a coach for Mazgaon Tadwadi, a govinda group that managed to form a nine-tier pyramid in 2013. “At 12, children are too big, and making shorter pyramids is no fun.”

According to Patil and other Dahi Handi stakeholders, it is perfectly possible to include child participants, make formidably high human towers and still ensure exemplary safety.

To prove it, they point to their only frame of reference: the castellers of Spain who build strikingly similar human pyramids as part of a 300-year-old tradition from Catalonia.

A study in contrasts

The pyramids of the Spanish castellers (castle-makers) and Indian govindas appear to have a lot in common. For one, both originated out of religious festivals: Dahi Handi celebrates the birth of Lord Krishna, while castelling evolved from a festival honouring Mother Mary in Valencia. Over the past few decades, both traditions have been focusing more on competition and achieving higher pyramids, and less on their religious roots.

In both cultures, colourful uniforms are used to distinguish between teams and create a visual spectacle. And while the government of Maharashtra is now keen to showcase Dahi Handi as a unique tradition of the state, the government of Catalonia has started promoting the castellers as a symbol of the region’s distinctiveness from the rest of Spain.

"Nowadays, castellers are used to convey a very strong national message, as a statement of Catalan identity against Spanish efforts to abolish it," said Xavi Bech de Careda, an advertising professional from Barcelona. "It is extremely popular."

Since 2005, Dahi Handi organisers in Thane have invited teams of castellers to Mumbai on at least four different occasions, to celebrate their traditions as the world's only two traditions of building such high human towers.

But to anyone who has observed both govindas and the castellers set up their pyramids, the differences are as striking as the similarities.

“The Spanish castellers just don’t fall as much as we do,” noted Ameet Saraiya, a trustee of Thane’s Sangharsh Dahi Handi organisers, run by Nationalist Congress Party leader Jeetendra Ahwad. “Our achievements are quite impressive considering we practice just for a month every year, but the castellers do get to practice all year.”

In Catalonia, making human towers has never been declared a sport of any kind. There are approximately 100 casteller teams around the region – one or two representing each town or city. They are formed by ordinary people who work in a variety of professions. The teams receive sponsorships from their local governments or companies and for most of the year, they travel to neighbouring towns and villages to perform in public squares for free. 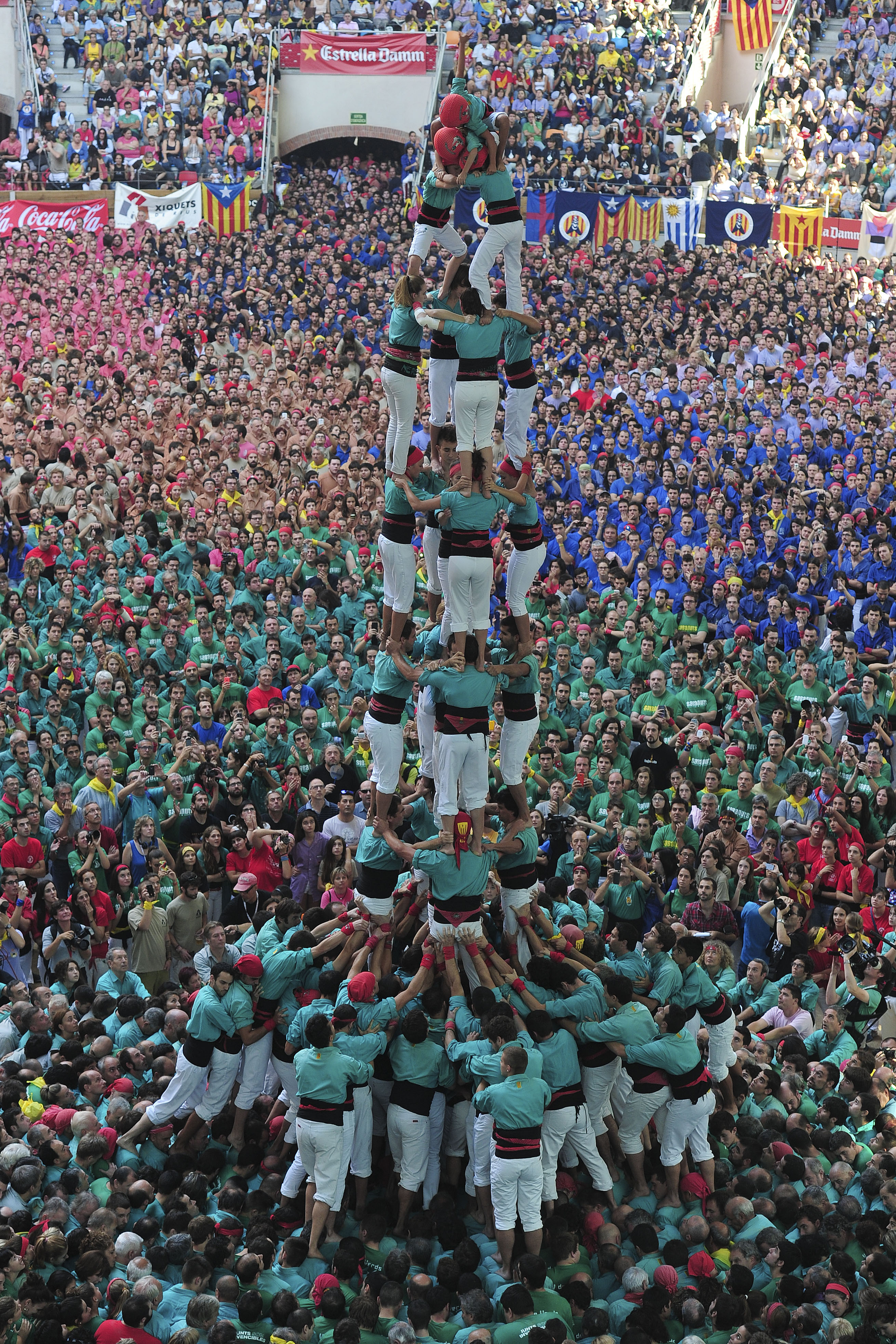 “But once every two years, we have a massive competition in the city of Tarragona where this tradition began,” said Josep Riera, a coach for Castelliers de Sants, one of the six casteller teams from Barcelona. Almost all competitive teams can easily achieve towers of seven to eight storeys, but in the past few years, five groups have successfully hit the 10-tier mark – a goal that remains elusive for Indian govindas.

Like most other professions, castelling used to be a men’s club, but women and children have been participating for several years now. Unlike govindas, however, men and women don’t form separate teams in Spain, as is evident in this video. (A longer documentary about the tradition of castellers can be seen here.)

‘Not a sport, but we have rules’

Among teams that aim for the highest pyramids, children as young as six are sent to the top tiers. But Riera does not see their participation as a risk to their lives.

“Castelling may not be a sport, but we do have a coordinating committee that makes rules,” said Riera. "And one of the recent rules is that those in the top four tiers must wear helmets." Over the years, he says, the committee has tested a range of different helmets and chosen ones that offer the maximum protection without getting in the way of other climbers. “When our team visited Mumbai in 2012, we brought 10 kinds of helmets for govindas to try out.”

But helmets are not the only thing that makes Spanish pyramids safer than their Indian counterparts. The techniques used by castellers to erect their towers are different, as is their assessment of risk, says Riera.

“We build our base layers slowly so if we feel the tower is not very stable, we stop construction early,” he said. “We make thousands of castles every year and from what I’ve seen, the rate of collapse is very low compared to the Mumbai pyramids.”

Mumbai records two or three deaths during the Dahi Handi celerbations almost every year, but in Spain, only two castellers have lost their lives in the past 30 years. “One could say this is dangerous, but Spain has other traditions like bull-fighting that is far more dangerous,” said Riera.

Riera doesn’t think much would change for castellers if their tradition was made an adventure sport, but he believes it is a good move for govindas. “I have seen the Jai Jawan team of Thane practising and their training is fantastic,” he said. “But adventure sports are perceived as dangerous, so this way, more security will definitely be put into place.”

‘We could learn from the energy of govindas’

To Catalonian journalist Jordi Joan Baños, who has witnessed both castellers and govindas perform at a high-profile Dahi Handi event in Thane, there are pros and cons in both traditions.

“The Catalonians could erect taller towers than the Indians, but it took them a long time. It never bored me in Catalonia, but it bored me here,” said Baños, a correspondent in India for a Barcelona daily. “Does something so physical have to be so rational at the same time? The govindas obviously think otherwise.”

Baños was also struck by matters of gender and class. The castellers are not segregated by gender, and the women in the team don’t really have to worry about sexual harassment. And while all the govinda teams seemed to belong to the same social class, the castellers displayed far more diversity. “In Thane I witnessed how the mayor of a Catalan town was one among the bottom layers, letting his fellow citizens climb on top of him to set the upper layers,” said Baños.

Despite this, Baños was amazed by the “energy and improvisation” of the govindas. “There are a few lessons the Catalonians should have taken home when it comes to entertainment and a buzzing sense of show: music, rhythm, lights, speed, water, colour, competition,” he said. “When it comes to excitement, govindas certainly reach higher.”