*The rate of scheduled-caste girls enrolled in primary schools is less than half the rate of all girls.

*Bihar has the second-lowest percentage of “active” scheduled-caste workers under the national rural jobs programme.

The first part of this series explored Bihar’s economic growth and personal and public infrastructure and the second part, education, health and crime. The third and final part looks at the role of scheduled castes.

Caste has always played an important role in the politics of Bihar, which is set to re-elect its assembly soon. Nitish Kumar, the chief minister of Bihar whose politics has strongly subsumed caste, is himself from an other backward caste. Former Chief Minister Jitan Ram Manjhi is a musahar, a scheduled caste.

The government of Bihar has allocated Rs 10,006 crore for scheduled castes for 2015-16. This money will be used for overall welfare of the scheduled caste population in the state.

Of 104 million Biharis, 17.9 million are scheduled castes or scheduled tribes, and in a state that sits on India’s bottom rung of development, SCs and STs – despite recent years of empowerment – occupy the lowest economic rung in Bihar.

With 16.5 million or 15.9% of the total population of the state SCs, Bihar has the fifth-highest population of SCs among eight Empowered Action Group (EAG) states, or poor states – Bihar, Chhattisgarh, Jharkhand, Madhya Pradesh, Orissa, Rajasthan, Uttaranchal and Uttar Pradesh.

Rural employment for SC workers is good only on paper

A quarter of all workers registered under the National Rural Employment Guarantee Act  – designed to provide 100 days of work for the poor in rural India – are SCs. 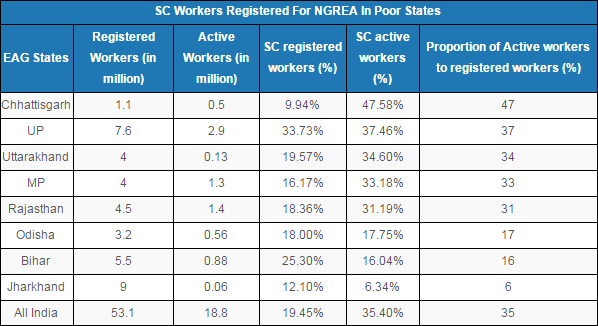 SC children in Bihar make up 19.9% of primary school enrolment, giving the state fifth rank among EAG states. This is better than the rate of SCs in Bihar’s population, but the rate of SC girls’ enrolment is less than half that of all Bihari girls.

Bihar is ranked third among EAG states with regard to proportion of girls enrolled in primary schools after Chhattisgarh with 49.3% and Jharkhand with 48.9%. That is not saying a lot. 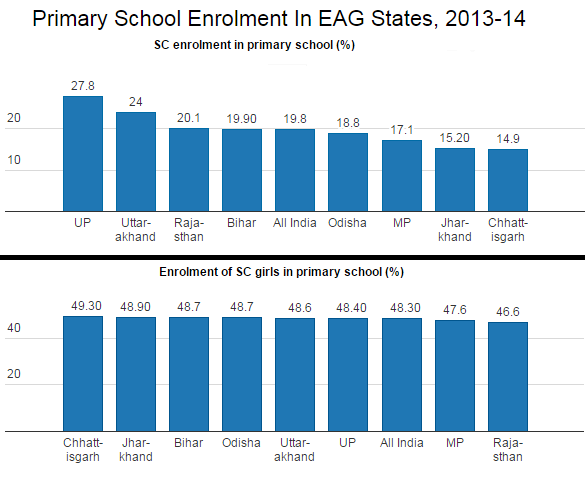 Uttar Pradesh with 27.8% and Uttarakhand with 24% are ranked first and second, respectively with regard to SC enrolment for primary education.

Crimes against SCs grow, more than a third of investigations pending

Bihar is now seeing more crimes against SCs compared to 2012, when it had the third-highest number of cases in the country.

Bihar has 8% of India’s scheduled-caste population, so the crimes against SCs are disproportionately high. 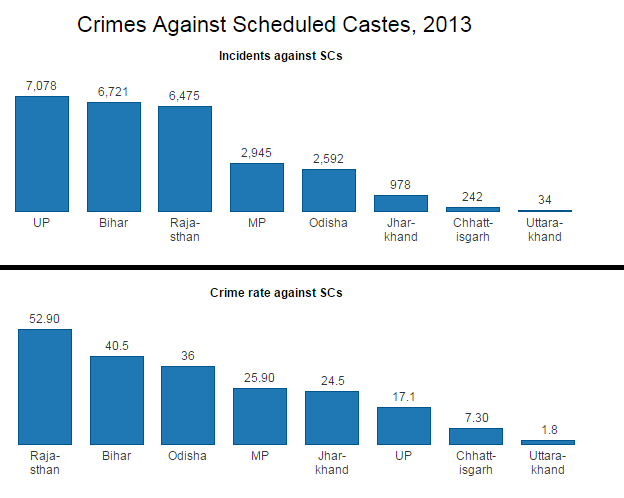 Nearly 35% of criminal cases against SCs registered are still pending with the police. Bihar accounted for nearly 23% of India’s total pending cases of crimes against SCs in 2013.

Almost 90% of all the cases reported are pending in courts in Bihar, and the state has a conviction rate of only 13.1% for all the cases registered. This shows that, despite the high reporting of crimes against scheduled castes, few investigations are completed.