Contribute Now
Ad
What seemed like a momentary ripple is now turning into a storm. China’s devaluation of the yuan last week hasn’t exactly pleased the markets and its pain has turned contagious. The Chinese stock market crashed by 8% on Monday, followed by a huge sell-off of Asian stocks with India's Sensex falling by more than 1,625 points, its third-biggest crash ever by absolute value, and the biggest crash since 2009.

The Indian rupee tanked too and registered a fresh two-year low as it was trading at Rs 66.67 per US dollar. While the downward spiral of rupee is worrying investors and led the Finance Minister Arun Jaitley to deliver a statement and assuage their concerns, a comparison with other emerging economies shows that relatively, it has been far more stable and robust as a currency against counterparts such as Brazil and Russia.

That, however, is not the whole story. 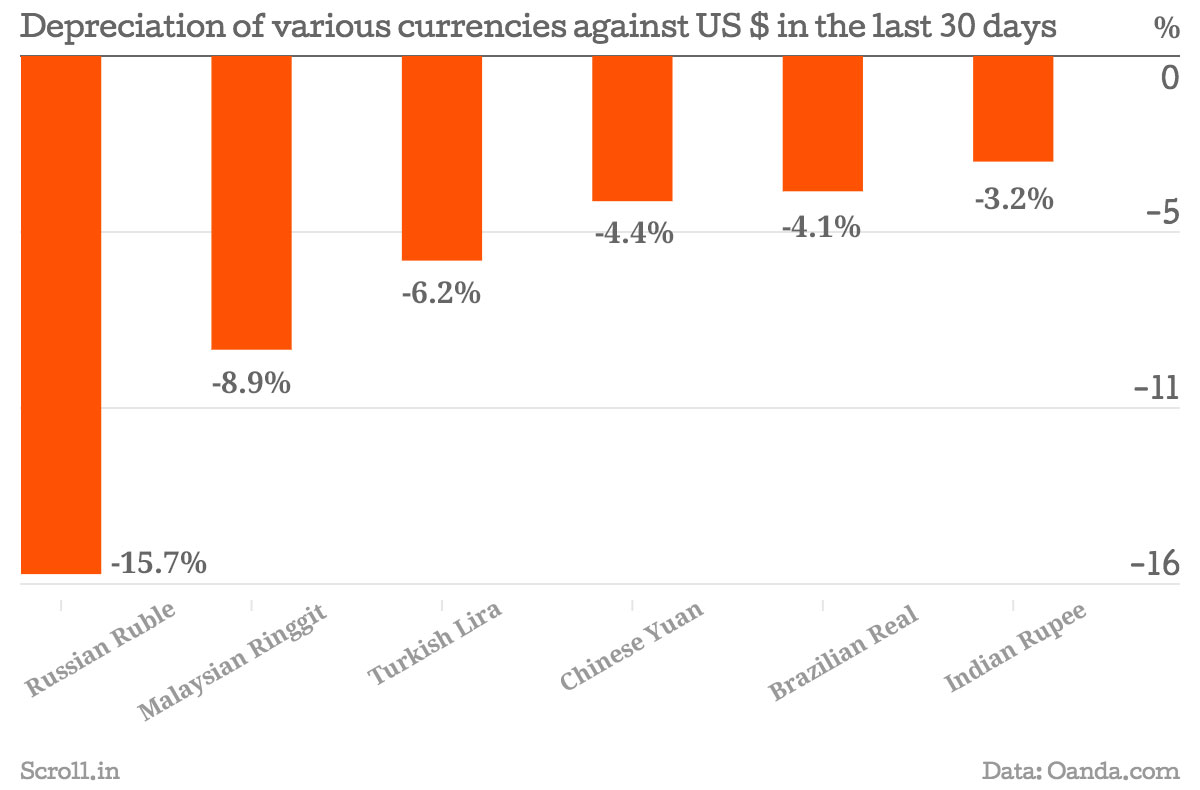 Over the last four weeks, more bad news has come from global markets than good which has had its impact on currencies across the world. But, the Indian rupee has somewhat managed to hold its own even as the currencies of Asian neighbours have gone into free fall against the dollar.

As seen in the above chart, Indian rupee has depreciated only about 3.2% against the US dollar over the last month, while the Russian ruble fell 15.7%, Malaysian ringgit close to 9%. Some of these moves were triggered by the Chinese yuan, which was deliberately weakened by China's central bank after sustained months of negative data from the markets.

There have been concerns that India's markets, like the rest of Asia's, are heading into choppy waters, which could have its own impact on the rupee. But Reserve Bank of India Governor Raghuram Rajan believes the Indian currency is not in trouble. Speaking as the sell-off began, Rajan argued that the worries could be premature and put things in context by claiming that the Indian economy is still strong relative to others.

"I wish to reassure the markets that our macroeconomic factors are under control as the economy is in much better position relative to many other economies,” Rajan said at a banking summit. “One of the things you must remember when you look at the rupee is that we keep looking at the dollar and say the rupee is weakening against the dollar, but the dollar has also moved across all other currencies,” he added.

While Rajan indicated that there may be a need for corrective action and that RBI would not hesitate to use its foreign exchange reserves to limit the freefall of the rupee, Finance Minister Arun Jaitley said that the “ripple” effect on Indian economy is only “transient.”

“Being part of the globally integrated economy this [Yuan devaluation] will leave some transient impact,” he said while inaugurating a two-day tax conference. “We stand by the growth projections for the fiscal made at the beginning of the year.”

While Indian economy is still struggling to assert itself, the rupee is nowhere near the grave currency depreciation faced by the Brazil, Russia, China and South Africa (part of the BRICS group of emerging markets).

Since August last year, the Indian Rupee has declined 7.84% against US $ while the Russian Ruble is down by 83.33%, Brazilian Real by 53.93%, and South African Rand by close to 21%. Chinese Yuan, on the account of being pegged by the Chinese Central Bank, has only depreciated by about 3.7% in the last 12 months.

It is also worth noting here that Indian Rupee is not among the “Troubled Ten” group of currencies which are particularly at a greater risk than others after the Chinese devaluation. The group has currencies of countries which are strongly dependent on China for trade and revenue and includes Brazilian Real to South Korean Won.

But it must be remembered that India was part of the earlier group of currencies called “Fragile Five” created in 2013 which had some of the worst performers in the recent years and the fact that it was excluded from "Troubled Ten" indicates that things may not be as bad as they seem just yet.

In Pakistan too, the rupee has been falling against the dollar – and there’s little that can be done