Contribute Now
Ad
Despite Karnataka Chief Minister Siddaramaiah spearheading the Congress’ campaign for the Bengaluru civic polls himself, the Bharatiya Janata Party has run away with the election, winning 100 of the 198 wards.

The Congress went into the Bruhat Bengaluru Mahanagara Palike polls under the shadow of a massive corruption scandal at the state Lokayukta.  To matters worse, Siddaramaiah got into a squabble with Congress veteran and former chief minister SM Krishna, who stayed away from the campaign.

This left the BJP in control of the BBMP, a council in which the party has held the majority since 2010. That said, the Bangalore corporation is one of the country's weakest municipal bodies and the new members have their work cut out for them in the coming months.

“We believe that the council has no option but to focus for the first 12-18 months on strengthening the BBMP as an institution,” said Srikanth Viswanathan, coordinator for advocacy and reforms at Janaagraha Centre for Citizenship and Democracy. “If they again get into this habit of announcing projects and spending money without strengthening their own house, it is going to spell disaster.”

The inefficiency of the previous BBMP council is well known. The most obvious of Bengaluru’s problems – garbage, bad roads, bad traffic and polluted lakes – have emerged due to bad finances, poor management and little accountability from its politicians and administration.

Janaagraha, which has rated city governance institutions based on urban planning, use of resources, transparency and accountability had rated Bengaluru 18th out of 21 cities. A big failing in the BBMP is its financial management, especially in collecting entertainment and professional tax, in having a realistic budget and in having medium-term and long-term fiscal plans.

Moreover, the BBMP is one of the most fragmented bodies, with little coordination among the various arms that provide civic services. The city's mayor has absolutely no powers, being elected to office for only one year and with no authority to appoint the municipal commissioner.

Viswanathan believes that the first things that the new BBMP council must do is to fix the corporations accounting system, raise revenues more diligently and publish performance data on its finances and operations.

A big cloud still hanging over the BBMP is that the restructuring bill, which proposes to split the corporation into three or more entities. The Karnataka governor has referred the bill to the President and if the President gives his assent, the BBMP itself might cease to exist. Whether this happens or not, the restructuring committee report still has useful suggestions for reforms to the corporation.

“It’s important that the council looks at the report, picks out what is in its court or what it believes the state government must do to strengthen the BBMP and get it done,” Viswanathan said.

Janaagraha has assessed how the council’s performance will improve if it implements some of the restructuring recommendations. 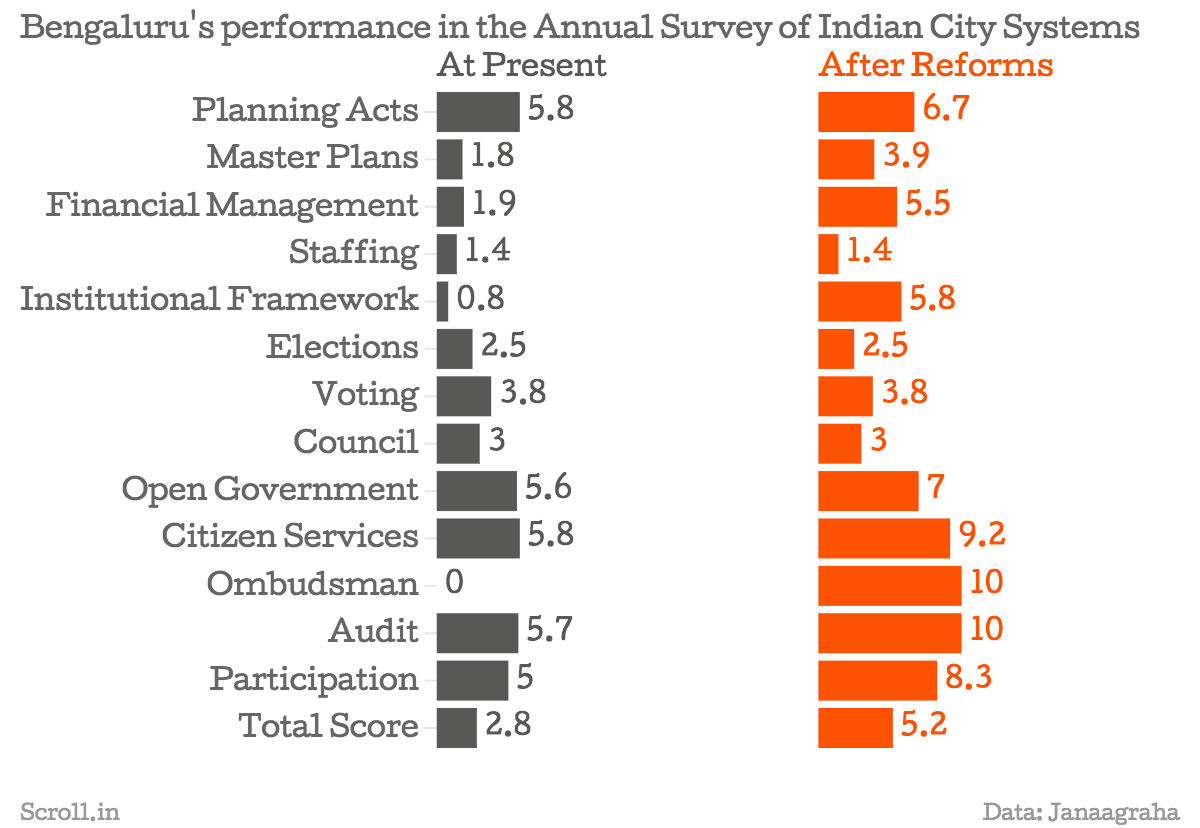