Become a Member
Ad
India has the third-largest population of dementia patients in the world, according to the latest World Alzheimer's Report. There are 4.1 million dementia patients in India, just behind the 4.2 million in the US and the more than 9 million in China. Forty seven million people in the world currently live with dementia, a number that is expected to roughly double every 20 years – to 75 million by 2030 and more than 130 million by 2050. 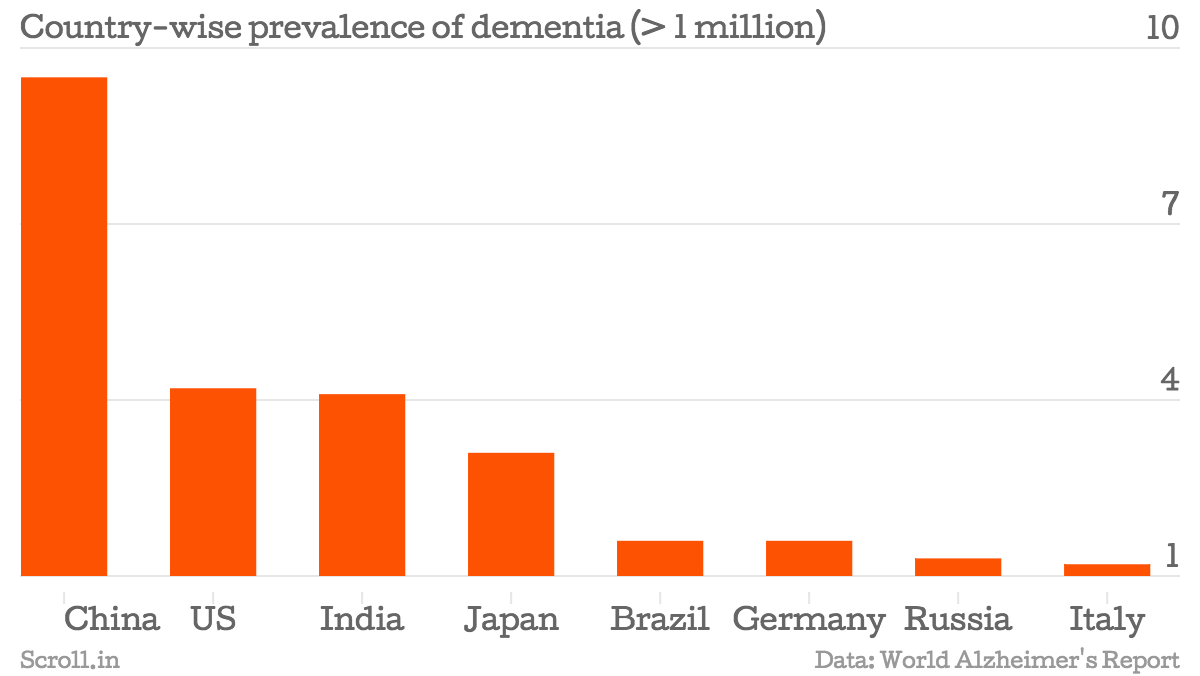 Dementia describes a range of symptoms related to decline in functions of the brain, often related to ageing. Memory loss is a form of dementia. Alzheimer’s disease is one of the most common manifestations. But dementia might also occur due to thyroid and vitamin imbalances and in these cases might be reversible.

Dementia affects more people in poor countries than those in rich countries and will continue to do so. Cognition scientists put this down to larger populations that age faster as life-spans increase and rapid changes in lifestyles. Ailments like hypertension, diabetes and cholesterol that are common with old age increase the risk of dementia. The World Alzheimer’s Report finds that in South Asia, including India, the incidence of dementia over the next 15 years is expected to grow by a scary 68%. 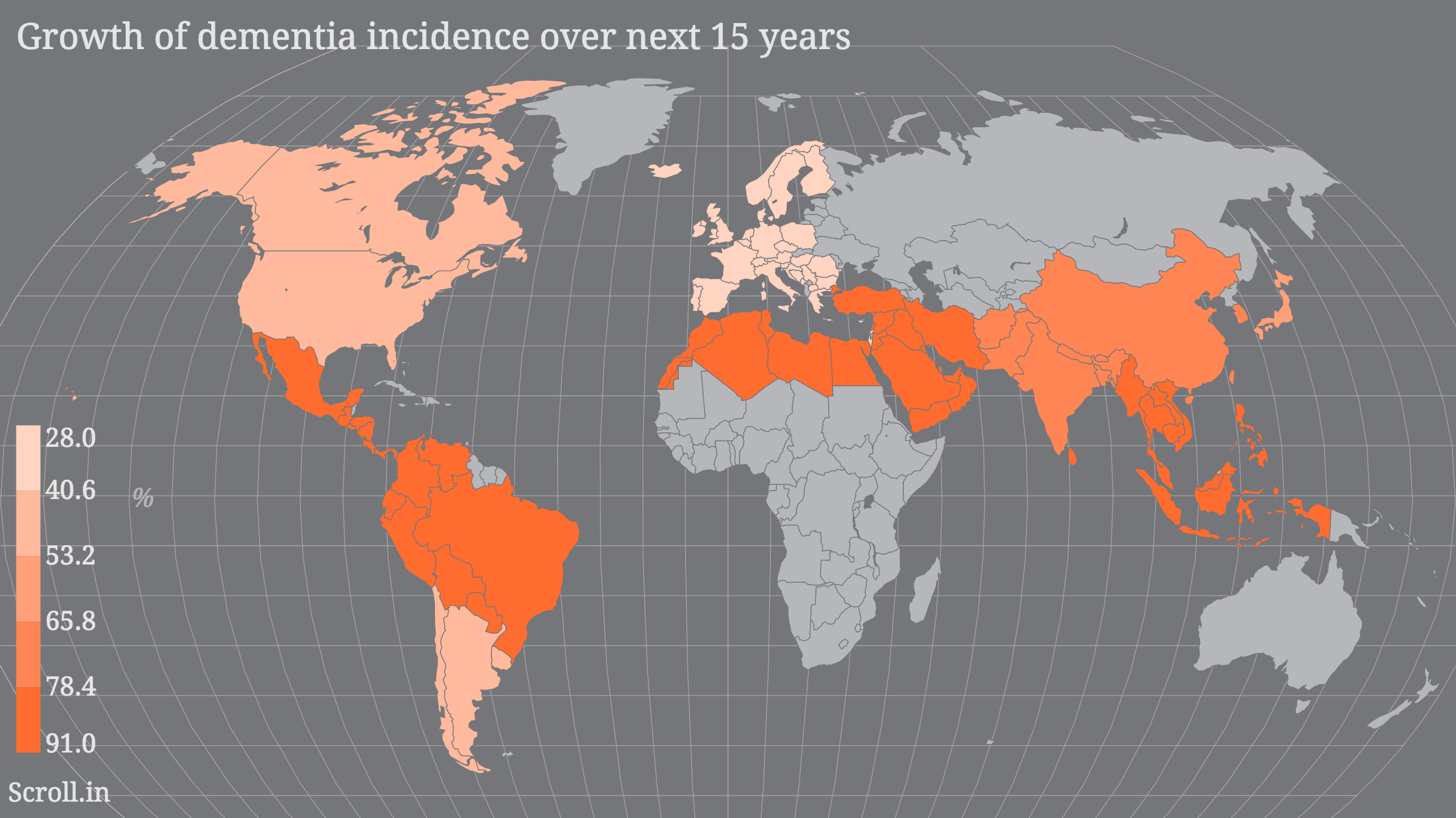 Dementia is expensive to treat and is going to increasingly cost more. Data from the the 10/66 Dementia Research Group shows that the directly attributable cost of dementia exceeds that of depression, hypertension, diabetes, ischemic heart disease and chronic obstructive pulmonary disease in most countries. In India, only ischemic stroke treatment is more expensive than treatment for dementia. 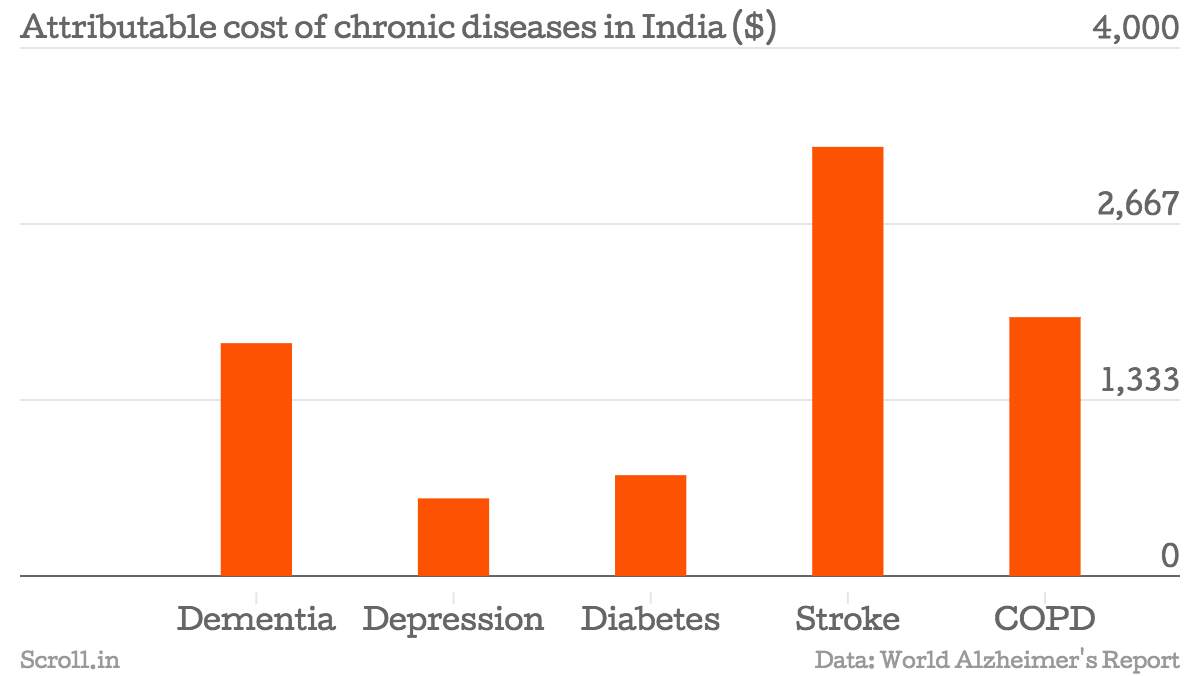 The nature of dementia in Asia might also be changing. In India, like the rest of Asia and unlike in western countries, vascular dementia has been the most common form of dementia. Vascular dementia is caused by a shortage of blood supply to the brain and one of the most common triggers for this is hypertension. New patterns are emerging, however, to show that the number of Alzehimer's cases, in which plaque builds up over nerve fibres, is catching up. New research also shows that people who are exposed to high levels of pollution are 40% more likely to develop both vascular dementia and Alzheimer's.

Dementia remains one of the most underreported illnesses. In India, low awareness about dementia has often led to its symptoms being written off as normal aging or simply as "madness". While studying dementia in India, Farooq Khan, a specialist in old age psychiatry with UK's National Health Service, found that

"people were able to identify the typical features of dementia but named them differently like 'chinnan' (literally childishness) in Malayalam language in Kerala, 'nerva frakese' (tired brain) in Konkani language in Goa where they also believed that it is caused by 'family neglect, abuse, tension and lack of love', and 'weak brain' in Hindi in Banaras. Though people realised the signs and symptoms of dementia, the suggestion that dementia is an organic brain syndrome and is part of a medical condition was not acknowledged."

A 2008 study by the 10/66 Dementia Research Group, a collective of scientists looking into non-communicable diseases in low-income countries, offers this snapshot of what dementia looks like in the Indian population by age group and location.

In India and other countries like China, Indonesia, Brazil, Mexico and Turkey the demand for medical services to treat dementia will rise most rapidly. But these countries are likely to have only restricted services given their limited resources, particularly in specialist healthcare, long-term community-based and residential care.

Where are the women? A study of High Court judges in India offers a number of insights