Contribute Now
Ad
Giggles and happy yelps echo through a children’s ward in one of India’s largest public hospitals. In another medical establishment, a silver-haired woman pulls faces and brings grins and tears to the faces of anxious patients and their family members.

It isn't common to hear laughter in a hospital, but then it isn't common to run into a medical clown either. The idea of using trained practitioners of the comedic art form as therapeutic support is not widely prevalent around the world, and less so in India, where hospitals remain grim sites of pain and fear.

Diya Banerjee’s documentary The Hope Doctors explores this relatively new phenomenon through the stories of Fif Fernandes, who along with her husband Hamish Boyd operates out of Pondicherry and works with the Aravind Eye Hospital there. There is also theatre artist and trained clown Ashwath Bhatt, who visits the pediatric cancer ward of the All India Institute of Medical Sciences in Delhi along with his troupe. Young patients break into guffaws, and parents distract their ailing wards by pointing out the funny men and women with red noses and colourful wigs.

Banerjee’s 52-minute documentary is among the titles that will be shown at the Open Frame festival being organised by the Public Service Broadcasting Trust in Delhi from September 15-September 22. The annual event showcases a selection of the documentaries that the PSBT produces every year. The films vary in length, theme and treatment, and include poetic and personal explorations of social trends, investigative documentaries, and interview-based productions.

The Hope Doctors suggests that Indian hospitals could benefit from a dose of jocularity, and would do well to include trained performers who can, through mime, music and dance, complement treatment and care.

Being funny is work too

Among the better-known proponents of the philosophy that "laughter is the best medicine" is American doctor and humourist Patch Adams, who inspired a Hollywood movie starring Robin Williams. “In India, there is absolutely zero knowledge on the subject of medical clowning,” observed Banerjee, a former television journalist. “People think this is an ad hoc intervention where clowns go in to cheer kids, but it is possible to employ clowns as staff where they do nursing work and are trained to use their performance skills to get the target group to feel better about medical procedures and day-to-day treatment. It has been scientifically proven that healing is faster when a patient’s mental health is also strong. This is why clowning should not be seen as an add-on, but something that can be embedded in the health care system.”

Fif Fernandes worked as a nurse with hospitals in Canada, before moving to Pondicherry with her husband. “Fernandes was a staff-appointed nurse and was kept in the emergency room for critical scenarios, especially when children needed to tell doctors what kind of pain or distress they were facing,” Banerjee said. 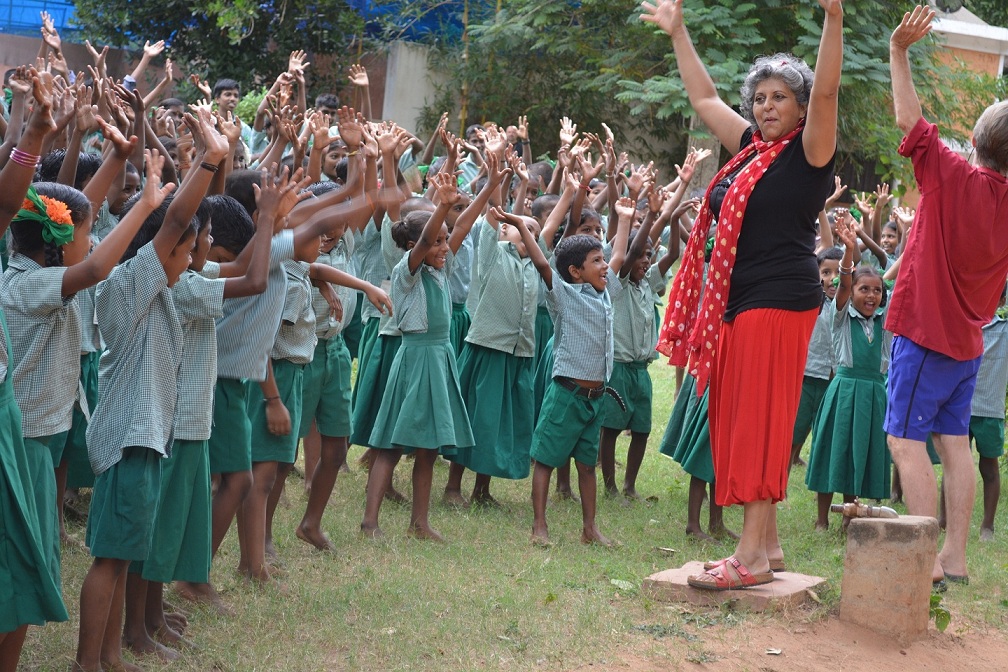 The sequence in which Bhatt and his group entertain children at AIIMS was created especially for the documentary. Bhatt and Banerjee met at an arts management course. “I knew Ashwath’s work, and I knew he had been using clowning as a theatre tool,” said the 33 year-old filmmaker. “He told me about his efforts to bring medical clowning to India and his work with CanSupport, the organisation that runs rehabilitation programmes for cancer-affected kids from poor families. He asked me if it were possible to make a film.”

The AIIMS administration, particularly Rachna Seth at the Department of Pediatric Oncology, agreed to allow Bhatt and his clowns to stage a few sessions, which Banerjee filmed. “The environment changed instantly and the kids seemed to have found a little more strength to deal with the pressures of constantly having to have chemotherapy and all kinds of medical tests,” Banerjee said. Bhatt and AIIMS are now trying to work out a formal and more permanent arrangement.

The scene that Banerjee has uncovered in her film is very new in India. “These are baby steps, and I have tried to show the potential, especially for a public hospital,” Banerjee said. Apart from following the work of Fernandes and Bhatt, she weaves in case studies of patients from lower-income households to illustrate her belief that the economically depressed sections of Indian society can especially benefit from a spot of cheer.

“There is an interest in the medical community – often doctors don’t have the time and the volume a public hospital like AIIMS receives is huge,” Banerjee pointed out. “They leave matters to their staff support, which is equally stressed, and the system can use clowning as a therapy in a country like India.”

From the cremation grounds in Varanasi, a rare tale of hope