Contribute Now
Ad
“If you have to escape dengue and malaria, sleep on the divider.”

“You have to know… which parks have benches with thinner gaps between the wood planks, how to fold cardboard boxes.”

“If you want to assume complete control of someone, never let them sleep.”

“The difference between public and private property is sleep.”

Sleep theorising is usually the preserve of laboratory white coats, but these observations about one of humankind’s most basic needs have been scooped off Delhi’s streets. In his stunning documentary Cities of Sleep, first-time filmmaker Shaunak Sen chases the pursuit of a night’s rest across two parallel worlds within the capital’s netherworld. One is Meena Bazaar, the teeming marketplace in Old Delhi that after dusk is transformed into a battleground commanded by a formidable tea seller and man who supplies cots to the numerous homeless people who cannot squeeze into government-run night shelters. Jamaal decides who gets to rent a cot and for how much (the rates are higher in winter). In dimly-lit Meena Bazaar, he looms as both Hypnos and Phobetor.

The other universe hugs the bottom of the multi-tiered engineering and sociological marvel that is Yamuna Railway Bridge, colloquially known as Loha Pul. Two railway tracks make up the first layer, two roads the next. The third stretch houses a makeshift cinema tent, whose owner lets his customers doze off for Rs 10.

There is a less obvious third world in this typically Third World situation. The Films Division-funded documentary opens in the dead of the night on a typically lonely and well-appointed Delhi stretch. A dog and discarded plastic bags flit across the roads, while elsewhere in less-ordered quarters, the real strays who exist on the city’s grimy margins scramble for their nightly ritual.

“Sleep has been approached through the lens of psychoanalysis and a biomedical discourse, but I was interested in exploring the social and political exertions on offer at night,” said the 28-year-old Sen. Inspired by the ideas contained in French philosopher Jacques Rancière’s book Nights of Labor: The Workers Dream in Nineteenth Century France, Sen and his crew, including co-cinematographer Salim Khan and associate director Aman Mann, started visiting night shelters three years ago. They discovered a subculture that is as invisible as it is acute: some of the homeless people ended up at the overstretched night shelters run by the Delhi government, but many of them had to make their peace with sleep entrepreneurs like Jamaal.

Delhi’s night shelters have been featured alongside other afterhours creature in Uma Tanuku's 2012 documentary Night Hawks. Sen's Cities of Sleep unearths an informal system that functions in the night’s shadows. Sen and his crew made several visits to Meena Bazaar to win the trust of key local figures such as Jamaal and Gufran, a caretaker of a night shelter for children. The film observes Meena Bazaar’s nightly negotiations over the shoulder of Shakeel, a homeless man from Assam with a sepulchral appearance and a performative and dissembling personality. Shakeel’s near-dead eyes, weighed down with the cruelty of being at the bottom of the sleep chain because the day’s earnings do not add up, give the impression that he is blind.

Not surprisingly, Shakeel made the first move. “We were looking for people at Meena Bazaar when he came up to us and asked us what we were doing,” Sen recalled. “He told us he had been brought up in a night shelter and wanted to give us an interview.” Shakeel was both intensely real and endlessly colourful. “He would go on lying and changing his statements,” Sen said. “Over time, we realised that he had a particular relationship with where he would sleep at night – it seemed to be an oppressive governing principle in his life.”

The filmmakers initially intended use Shakeel as the anchor of the film, but his frequent disappearances prompted them to look for a back-up. They found it at Loha Pul, which is depicted as an altogether tidier and gentler place. The sleep business here is run by Ranjeet from a tent that doubles up as movie hall and bedroom. For a small fee, Ranjeet allows the floating population to take in Hindi cinema’s fantasies and grab some shut-eye mid-song. Both spaces are marked by the street-level acumen and sometimes violent competitiveness that tend to be engendered by desperate poverty and governmental neglect.

Sen opts for an observational style and often shoots his characters from a distance to place them within their surroundings. Shakeel’s single-minded pursuit is depicted in a series of recurrent shots that show him with his back to the camera, striding towards his potential destination of slumber.

Delhi is a city that is never at the loss of words, and the capital’s love for philosophising has percolated to the people it chooses to ignore. Shakeel's pronouncements reveal both his wiliness as well as his intense daily struggle to rest some place, while Ranjeet’s wisdom might not be out of place in a TED talk.

“Ranjeet speaks with an intellectual sophistication and ease that is stunning,” Sen said. The men are shown as characters rather than victims because of their will to negotiate a toehold in an intensely competitive metropolis. “Because these insights into their own condition are given with cerebral breadth, it seemed that they needed to be the main vector of the film,” explained Sen. “This dictated the form – we did not want to render these worlds transparent. If you have good access and characters who trust you, life unravels itself in richer ways than through direct question and answers or interviews.”

The observational documentary remains one of the most exciting forms of non-fiction storytelling because of its claims to veracity and honesty, but it also a minefield of manipulation and exploitation. Real life can easily be massaged into a pleasing or shocking narrative, depending on the filmmaker’s intention, while being voyeuristic about poverty is a real problem when privileged filmmakers parachute into pockets of deprivation.

The city film, another sub-genre that sometimes overlaps with the observational documentary, has its own pleasures and perils. An approach that is accompanied by filmmaking tricks – evocative and flavourful cinematography, a sharp sound design, neat editing to elide gaps and create bridges – can render abstract an otherwise gritty social reality.

Can a dimly lit hunt for a cot be as atmospheric as in a fictional feature? Can a moment of hard bargaining between the ruthlessly pragmatic Jamaal and a wheedling Shakeel yield entertaining repartee? Yes and yes, which is why there was a “crisis and a struggle throughout the edit”, Sen said. “The choice was between two approaches and two kinds of storytelling,” said the Jawaharlal Nehru University graduate. “One is a narrative driven by the pleasure of the plot that takes you forward, which is Shakeel’s life. The other is the abstracted form of exposition, of letting an idea unfold through moments of cerebral consciousness, such as what Ranjeet says about himself. Does one stick to the empirical social realistic approach or the more essayistic style?”

The matter was resolved by Sen and co-editor Sreya Chatterjee by approaching Meena Bazaar and Loha Pul differently. The footage that had been gathered over a two-year period became the story of a person (Shakeel) and the biography of a place (Loha Pul). “It came together posthumously during the edit,” Sen said. 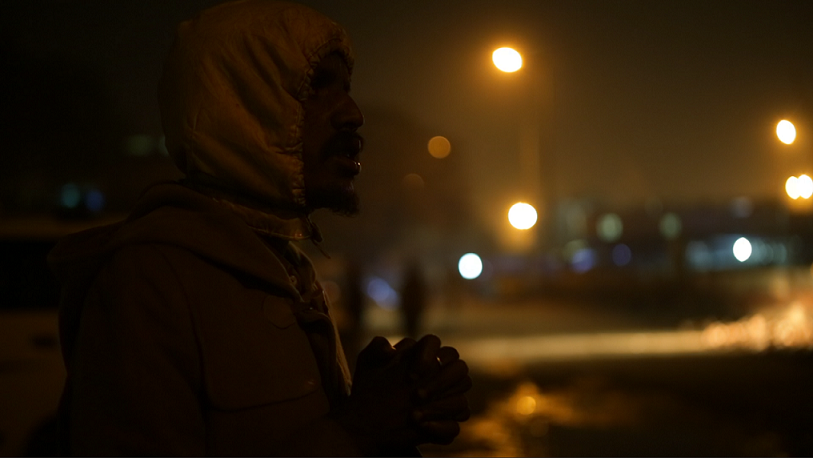 Another frequently reported peril of the observational documentary is the attempt to suggest identification between filmmakers and subjects as a way of masking obvious differences in status. Shakeel plaintively asks Sen, “You only shoot, you won’t do anything for me?”

Sen attempted to tide over the gulf through “earnest curiosity”, as he called it. “At Meena Bazaar, our modus operandi was that every single day, we would first go to Jamaal and have a cup of tea from his stall," he said. "Or we would meet Gufran, who was practically an assistant director on the project. Because Gufran trusted us, so did Jamaal. After a while, everybody got used to us.” Ranjeet sees himself as an unofficial social worker who is filling in vast gaps in the city’s services towards its underprivileged.

The worlds laid bare in Cities of Sleep are dominated by men, since they make up the majority of the unsheltered population in the capital, Sen said. “There are night shelters for women or families, defined as a couple with children under the ages of eight,” he said. “But the migrant daily wage labour seen at the shelters is mostly male. I desperately wanted a third section with a woman character, but access was very difficult, since we would not have been allowed to enter the night shelters.”

The worlds that Sen did enter speak volumes about the state of the urban poor, in Delhi and elsewhere. The struggle to find a spot to sleep continues through the seasons. At one point during the monsoon, floods in the Yamuna force Ranjeet to abandon his tent and relocate for a fortnight. After the waters recede, he returns, as do the rest of the nightcrawlers. Everybody needs their few hours of slumber, and some must go to heartbreaking lengths for the simple pleasure of a good night’s sleep.