Contribute Now
Ad
Badkagaon in Hazaribagh district is the epicentre of an intense land struggle in coal-rich Jharkhand. For the past 10 years, farmers and India’s largest power generator, the National Thermal Power Corporation, have been locked in a conflict here. While the NTPC wants to take over the land and mine coal for its power plants, the farmers in Badkagaon refuse to sell their land and move away. They have launched two koyla satyagrahas in the past two years – digging coal by hand, selling it to traders and paying royalty to the gram sabha, offering this as an alternative model of mining in the region.

Last month, the conflict flared up again. While commentators debated whether the National Democratic Alliance government will extend its land acquisition ordinance, things came to a head in Badkagaon as fighting broke out between Hazaribagh district officials and the villagers.

On August 14, about 200 Badkagaon villagers reached Dhenga village, where NTPC contractors were building a resettlement colony for them under the watch of security personnel. Led by the local MLA Nirmala Devi, they tried to walk to the half-built houses in the midst of paddy fields. The building contractor’s staff, who locked themselves inside their office and watched from a window, say the farmers were trying to demolish the walls of the under-construction houses. For their part, the farmers say they had announced from their “prachaar-vahan”, a tempo mounted with a loudspeaker, that they simply wished to sow paddy at the construction site.

As the farmers threw stones at officials trying to stop them, the police responded with tear gas shells and shot 22 rounds of bullets into the crowd. Six persons were injured in the firing, including a journalist. All six were arrested by the police when they reached the civil hospital in Hazaribagh for treatment. The local legislator Nirmala Devi was arrested 10 days later from the state assembly while the monsoon session was on.

The August 14 episode was the second time in over two years that the police had fired at farmers affected by the project. On July 23, 2013, the police had shot at farmers in Pagar village when they tried to stop an NTPC contractor from starting office construction. A 55-year-old farmer, Keshar Mahto, died on the spot, while three were injured.

By all signs, Badkagaon will continue to simmer. Not just because it is far removed from Delhi’s concerns, but also because its struggle is unconnected to the central government’s decisions on the much-debated land acquisition law. The NTPC is getting hold of most of the land in Badkgaon under the Coal Bearing Areas Acquisition and Development Act 1957, one of the 13 legislations which have been kept out of the purview of the land acquisition law and, more importantly, don’t have its safeguards.

How did we get here?

It took India more than a century to replace the colonial law of 1894 on land acquisition. When the United Progressive Alliance government passed the Right to Fair Compensation and Transparency in Land Acquisition, Rehabilitation and Resettlement Act in September 2013, it announced that the new legislation will stop forcible acquisition. For this, several safeguards were introduced: it was made compulsory to get the consent of at least 70% of the affected people, and it was made binding to assess the project’s social impact. The second check was meant to ensure that only the minimum land needed was acquired and that the social costs were not unduly high.

While passing this law, the government, however, made an exemption for land acquisition by public sector units under 13 central laws. This meant that any land secured under these 13 laws weren’t checked by the consent and social impact assessment clauses. The exempt laws related to building roads, railways, prospecting and mining coal and other minerals.

As it happens, in Jharkhand, over 80% of all land acquisition – over 20,000 acres – is being done under the exempt central laws.

For instance, for the private lands it needs for the Pakri Barwadih mine project in Badkagaon, the site of the recent violence, NTPC is acquiring two-thirds, or 4,071 acres, under the Coal Bearing Areas Acquisition and Development Act, and only 767 acres under the Land Acquisition Act for building offices, colonies, etc. None of the consent provisions apply to the coal bearing areas acquisition law.

In recent months, the NDA government had come under strident criticism for passing an ordinance to the Land Act that created five special categories – including, infrastructure, rural infrastructure, defence – exempt from the provisions on consent and social impact assessment. But the immunity given in the original law to acquisition under the 13 central laws – and the resultant intensification of land conflicts – escaped scrutiny.

This gap between the public debate and what’s happening on the ground was evident in a recent study by the NGO Commonwealth Human Rights Initiative that examined the government’s recent notifications for land acquisition. For the first six months the NDA government promulgated and re-promulgated the ordinance amending the UPA law – specifically, from January 1 to June 30 – various central ministries issued 219 notifications to acquire land in 1,584 villages across 22 states.

All this acquisition, the study revealed, was done under sector‐specific land acquisition laws, such as the Coal Bearing Areas Acquisition and Development Act, the Railways Act, the National Highways Act, that fall in the exempt category. The NGO’s researchers didn’t find even a single instance of use of the NDA’s land ordinance by central ministries. Meanwhile, the stringent opposition to its land ordinance forced the Modi government to let it lapse on August 30. 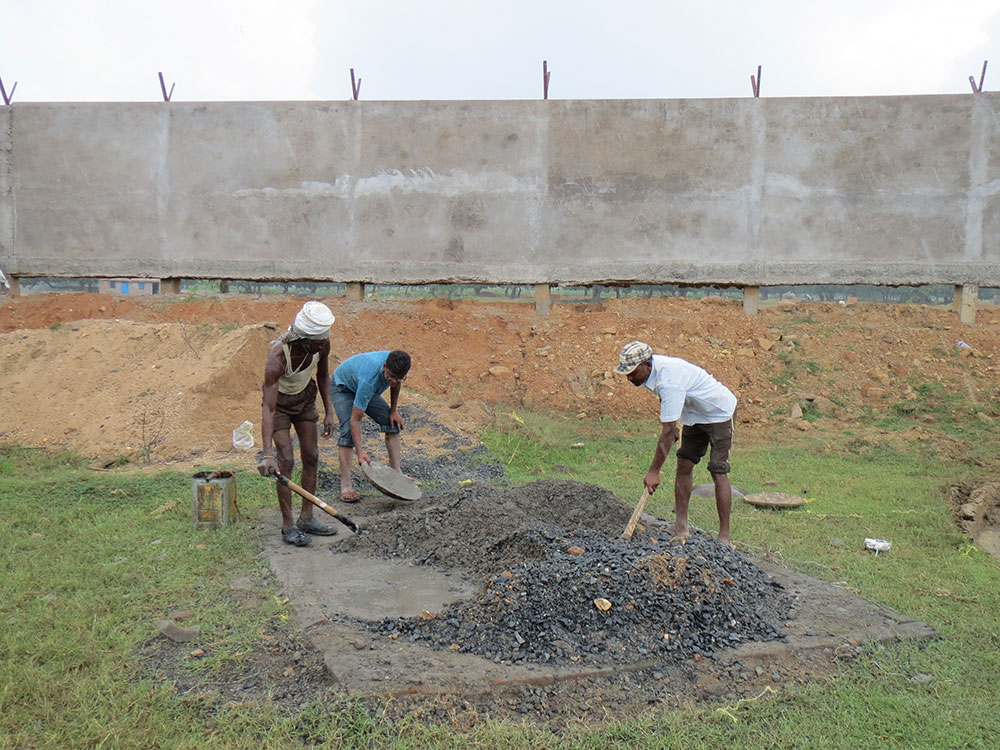 Construction on for NTPC sub-station in Badkagaon

Though the UPA government’s 2013 Act left out 13 laws from its safeguards, it did nevertheless mandate that within a year of its enactment, the compensation and rehabilitation framework of the 13 sector-specific laws would be brought to its level. This was one of the changes the NDA implemented when it passed the land ordinance for the first time in January this year.

In Jharkhand, the government has fixed four times the market value of the land as the compensation rate in rural areas. But on the ground, most ministries are yet to comply, say state officials. “Of all central ministries which are acquiring land here for their projects, only the ministry of road transport and highways has so far agreed to pay compensation at the rate of four times in rural areas as per the new law,” said KK Soan principal secretary, revenue and land reforms department in Jharkhand. Soan said he had written to other ministries, but got no response.

NTPC declined to respond to a questionnaire on whether it had formulated a new policy of compensation and rehabilitation under the 2013 law.

The public-sector Coal India Limited too is acquiring land in central Jharkhand, in an area adjoining Badkagaon, under the Coal Bearing Areas Acquisition and Development Act, as part of a project to double its production. But so far it has set up a five-member committee to examine how its existing policies may be adapted to meet the compensation and rehabilitation framework of the 2013 law.

The 2013 law provides for giving employment to one member of each family affected by land acquisition. Under its existing policy, Coal India Limited, the world’s largest coal mining company, provides jobs but only to those landowners who lose 2 acres or more. Those who lose smaller plots are overlooked.

Officials say they are concerned because the 2013 law qualifies not just landowners for compensation and rehabilitation but anyone affected by land acquisition – such as sharecroppers, farm labourers. “How will we verify the claims of sharecroppers, and labourers?” said an official at Central Coalfields Limited’s office in Ranchi. “This is not practical.”

But it is not that the existing policies have got practical gains for the PSUs. Both NTPC and Coal India Limited's projects in central Jharkhand have been delayed for years because of affected farmers' resistance to land acquisition.

At Central Coalfields Limited’s Amrapali opencast coal mine in Chatra, a few kilometres from Badkagaon, it has taken the public sector company almost 10 years to begin mining mainly due to delays in land acquisition. In Bengalaat in Chatra, villagers say mining was on only on forest land. Of the 3,412 acres needed, CCL has acquired 3,207 acres. But less than half, only 1,319 acres, is in “physical possession”, as per its own data. This consists of 1,312 forest land and 7 acres private land. The remaining land is not in “physical possession” because farmers in five villages, including Bengalaat, have not yet agreed to accept compensation.

In Hazaribagh, at the NTPC project site, the signs of the pitched battle that took place on August 14 between the government and the villagers were still visible in September. Construction at NTPC’s resettlement colony had resumed under heavy security. A car gutted in the protest and a burnt generator lay outside the site office. A charred motorcycle – its paint peeled off to reveal orange metal – lay amid ripe green paddy fields. 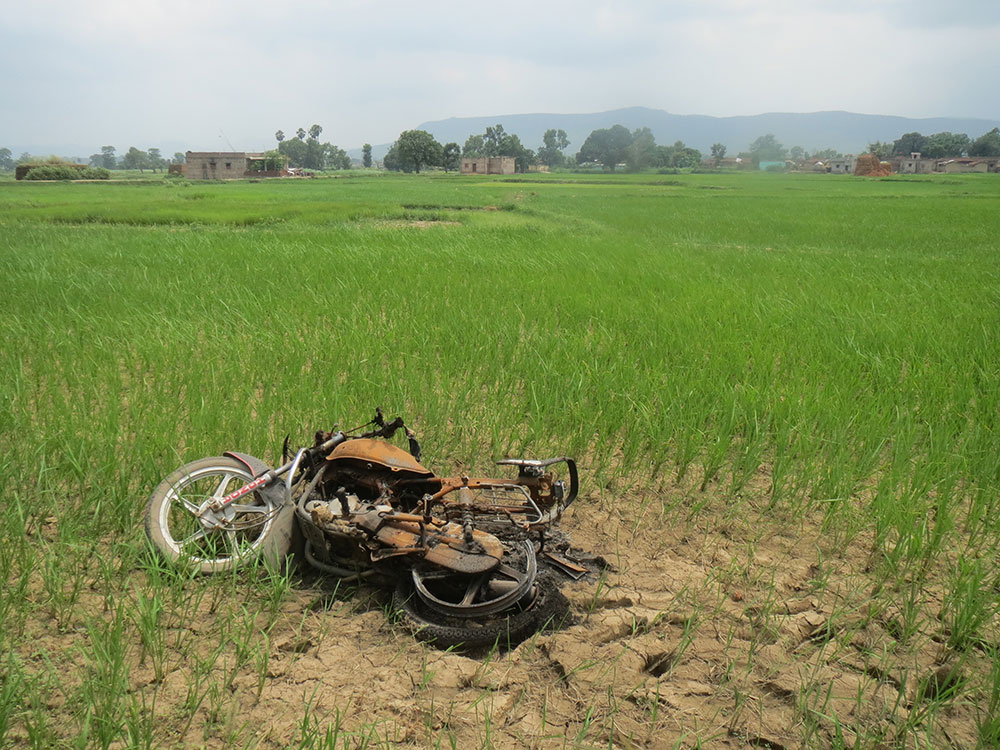 A construction company from Kolkata, McNally Bharat Engineering Company Limited, has the contract to build 2,111 houses here to rehabilitate farmers who lose their land. But two years after it got the contract, it has not been able to build even a tenth of its target. The families who are losing their farmland camped at the site for nine months under tents to obstruct construction. “Men, women, children reached here every morning at 8 am before we did, stayed on till evening as long as we were at the site. They did not let us start construction,” said Shivnath Das, a member of the contractor’s staff. Work at this site could begin only in July after the district administration posted hundreds of policemen at Dhenga. It went on for a month till the villagers’ anger boiled over in the protest march and police firing at the villagers this August.

NTPC has not been able to start mining at the largest of its three coal mine projects, the Rs 33,000-crore Pakri Barwadih coal block awarded to it in 2004. As per NTPC data, of the total 8,055 acres needed, it has been able to acquire about half, 4,043 acres, including forest and government-owned land, seven years after it started acquisition. Of 8,745 affected families, only 2,614 have accepted compensation.

Farmers’ opposition has forced NTPC to revise the rate of compensation four times, more than doubling it from its initial offer of Rs 8 lakh per acre when it began acquisition in 2007 to Rs 20 lakh per acre now. But the affected families say this is still not enough. “At Rs 20 lakh an acre, NTPC is only just about matching the circle rate, which is much lower than the market rate,” said Koleshwar Mahto, a policeman in Ranchi who was home on leave in Churchur village. “They are forcibly depositing funds in land owners’ names in the treasury.”

A section of the villagers led by the MLA Nirmala Devi have demanded Rs 70 lakh per acre and a job. In several other villages, such as Chepakala, farmers flatly refuse to even consider negotiation. “Even if NTPC gives Rs 70 lakh an acre, will we eat the money?” said Kailash Rana, a farmer who has been jailed thrice since 2006 for taking part in protests against land acquisition.

Sudhlal Sau, a farmer in his late 40s in Jugra village, said he grows wheat, gram, spices, vegetables and sugarcane on 2.5 acres. “Except for salt and cloth, we can produce everything that we need,” he said. Sau spoke of the two “koyla satyagraha” in which he and hundreds of Badkagaon’s villagers extracted 7 tonnes of coal by hand in Arahara and Nopa villages. “No company can force us to give up our land,” he said. “If they want coal, we will extract it and give it to them, it lies beneath our land.” 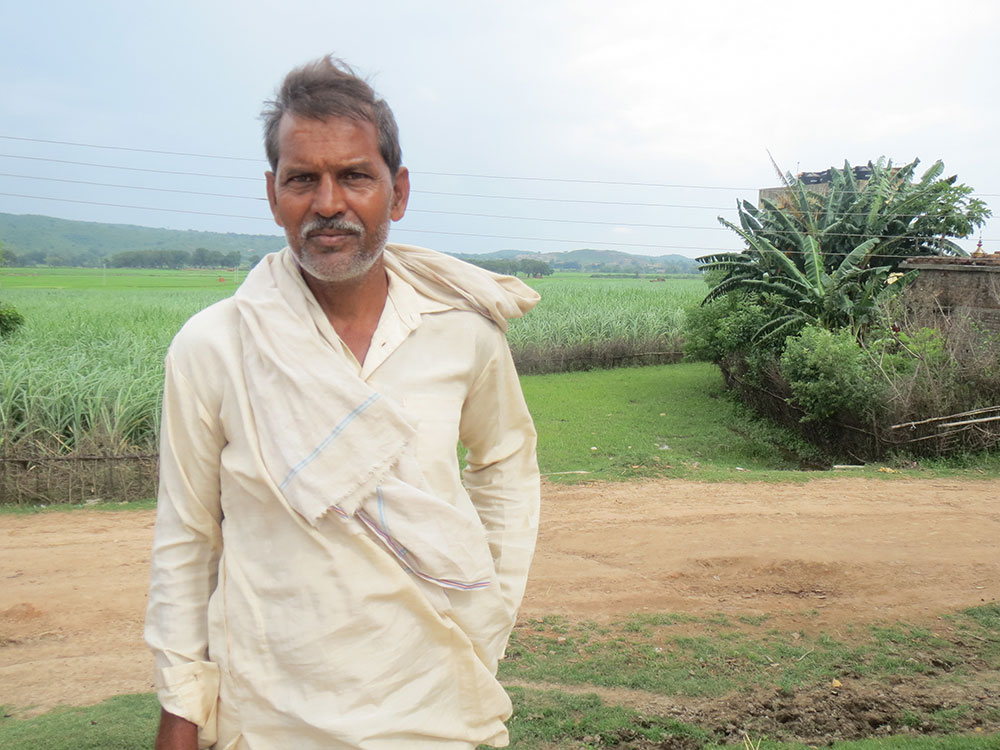 Sudhlal Sau with his crop of sugarcane

In Jharkhand, protests break out over changes to land tenancy law in Adivasi areas