But Delhi is not alone.

In 2050, deteriorating air quality in some of India’s biggest cities – Delhi, Mumbai and Kolkata – could kill over 130,000 people. At current levels, Kolkata would be the deadliest, with its air pollution levels causing 54,800 deaths in 2050. New Delhi would be the second worst. 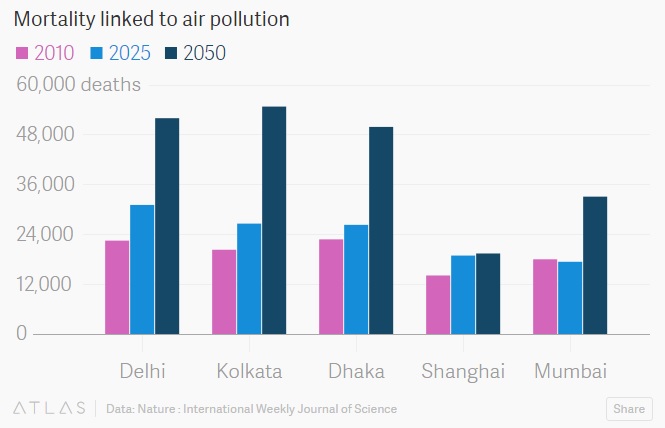 “We find that emissions from residential energy use such as heating and cooking, prevalent in India and China, have the largest impact on premature mortality globally,” a team led by Johannes Lelieveld, director at the Max Planck Institute for Chemistry, noted.

In India, fuels used for generating power in homes seem to be the main cause of the deteriorating quality of air.

“Our study indicates that residential energy use is the leading source category, practiced by many people both in the urban and rural environment in India,” Lelieveld told the Times of India newspaper. “It is an inefficient form of biofuel combustion that causes a lot of smoke and is the foremost source of premature mortality by both indoor and outdoor air pollution in Asia.”

Here are some of the main causes that led to deaths by air pollution in 2010, according to the study.

In March this year, international non-profit Greenpeace had reported that the amount of pollutant particulate PM2.5 – tiny particles or droplets in the air – in Delhi’s air was 13 times greater that the World Health Organization’s annual recommendation. Moreover, in May last year, the WHO said that Delhi is the most polluted city in the world with the highest concentration of PM2.5, which directly affects the respiratory system.

According to an investigation by the Indian Express newspaper in April this year, the city had extremely high count of respirable suspended particulate material. RSPMs are tiny and toxic particles – produced by vehicles and during combustion in industries – that cause major respiratory ailments.

The investigation also showed that there has been a 300% increase in the number of cases of respiratory ailments at AIIMS, Delhi’s top government hospital, since 2007-08. The cases are rising at a rate of 100 new patients a day.

In fish-loving Kerala, poaching and pollution are decimating stocks – and threatening livelihoods