Contribute Now
Ad
One may never get to know how the Sabar live unless one looks for them. Even that requires guidance from someone who knows where they stay. We reached their hamlets, or rather their scattered huts, at the end of narrow country paths in a remote corner of Potka Block in East Singhbhum district, Jharkhand. On the way we met a number of Santhal men who were cycling to local markets with loads of wood, piled high on their carriers using ingenious contraptions. They lived in humble but beautifully decorated kaccha houses that seemed, on the way back, like abodes of comfort in comparison with the Sabar hamlets.

The first Sabar "house" we reached was just a tiny hut made of twigs, leaves and sticks. It was hard to believe that anyone could actually live in such a miserable dwelling, not even tall enough for someone to stand in. The hut, inhabited by an elderly couple, was bare of any possessions except a few pots and some sort of thin bedding. Perhaps it was not a permanent dwelling, but one of the shelters the Sabar build from time to time as they move around the forests of Jharkhand. The fact remains that this is all they have. 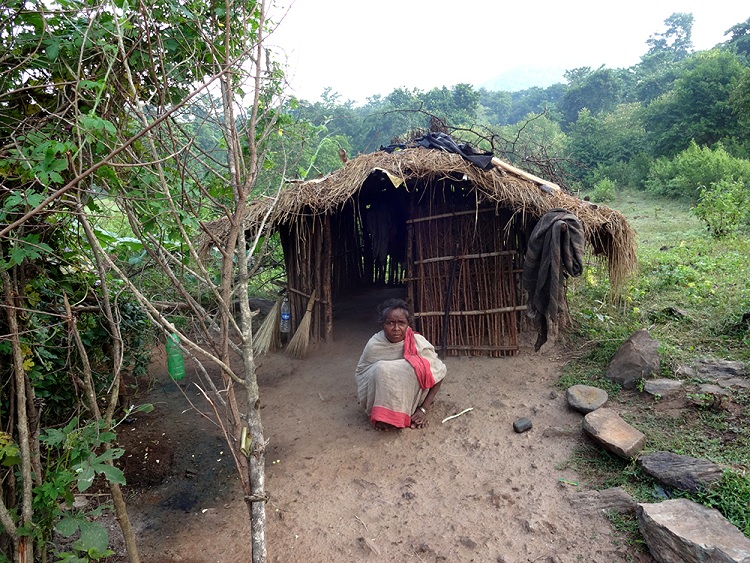 The first hut we saw on arrival
Credit: Santanu Sahu

A few neighbours gathered as we hung out near the hut. It was difficult to engage in a conversation with them – not because of any language problem, but because most of them were listless and uninterested. I guessed that their thoughts floated around their next meal and where it would come from. Some of them asked whether we might be able to arrange some blankets, because the winter was approaching and they had none. All the children looked severely malnourished.

One young boy who passed by from another village had studied until Class VII in the village school. It was striking how a smattering of second-rate education seemed to expand his outlook and confidence. He had worked as a casual labourer in Kolkata and had some idea of the ways of the wider world. He could not have been earning much in Kolkata, but at least he seemed to have a chance to escape the trap in which the others were imprisoned.

We proceeded further up the forested hill where the Sabar huts were scattered. All of them looked much like the first one – a little taller and sturdier at best. They were all bare in the extreme. Hunger and illness seemed to hover over every family. Some way up the slope, we reached a hut where a young woman was boiling some wild roots as her pot-bellied child slurped some leftover rice from the previous day. Sabar families seem to eat rice when they can afford it; otherwise, they survive on forest products. Many of them, by their own admission, drink a good deal of handia (rice beer) – perhaps it is the only way to feel on top from time to time, in these dire circumstances. 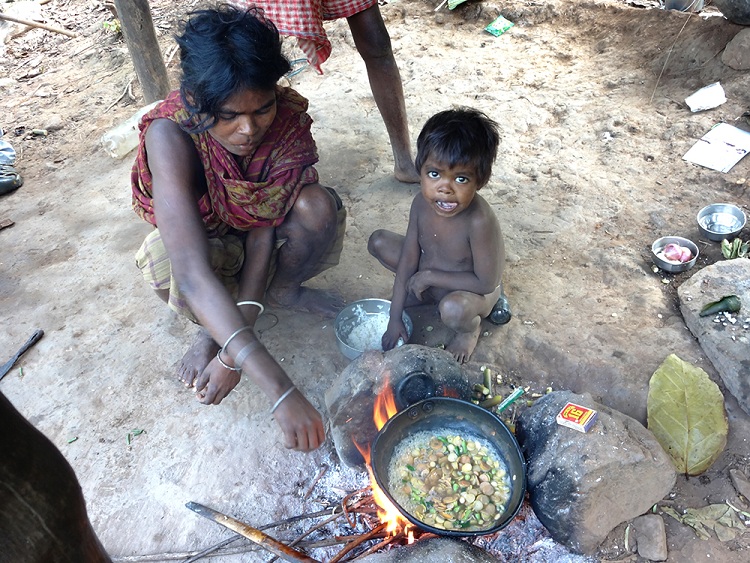 Most of the Sabar in this area survive by selling wood, hacked from the surrounding forests. Since none of them have bicycles, they are unable to take the wood to distant markets where they might get a good price for it. Instead, they sell wood at a discount to nearby Santhals who take it on their cycles to local markets. With the proceeds of the wood, the Sabar buy some rice to eat or drink later in the day, and then the same routine starts again the next day. 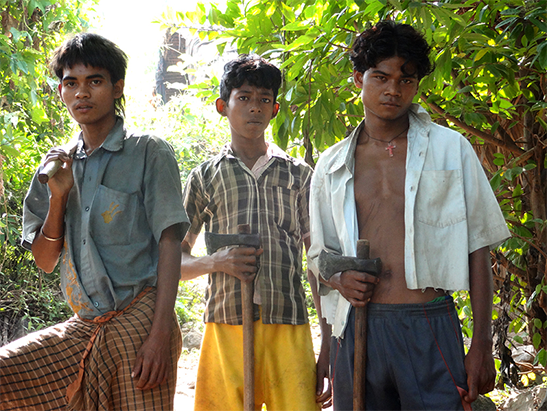 We visited another Sabar hamlet, somewhat less isolated and better off. Even there, we found illness and food insecurity in almost every house. There Kuni Sabar, an elderly widow, was living under a tree after being thrown out of the tiny family hut by her son. There Nudhu Sabar, who suffered from a chronic disease that made him shake uncontrollably all the time, was on his way to the jungle, axe in hand, because he had no choice. Meanwhile Sumi Sabar, a young mother, was lying half-conscious inside her hut, ravaged by tuberculosis. Her feather-light baby was sitting listless on the floor. We were shocked to hear from her that he was a full four years old. He looked like he may not survive. 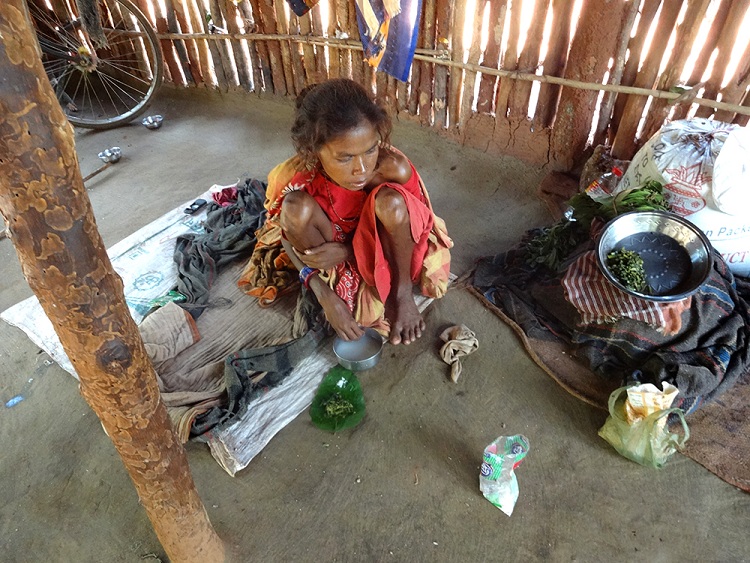 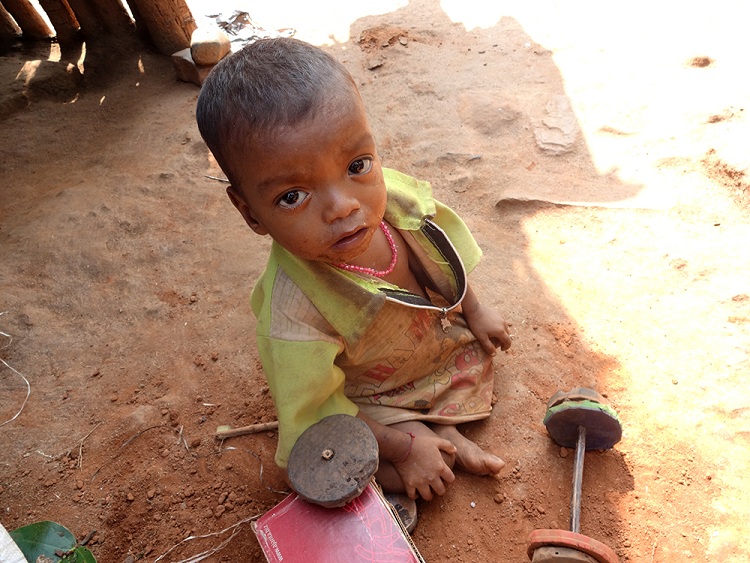 Sumi Sabar and her child – she claims that he is four years old
Credit: Santanu Sahu

Further on we met Sukra Sabar, who was lying on a charpai with an ugly wound near his ankle. His wife told us that he had hit his own leg with an axe. Their daughter was also lying there, under a blanket, struggling with fever – someone said it was jaundice, but who knows. 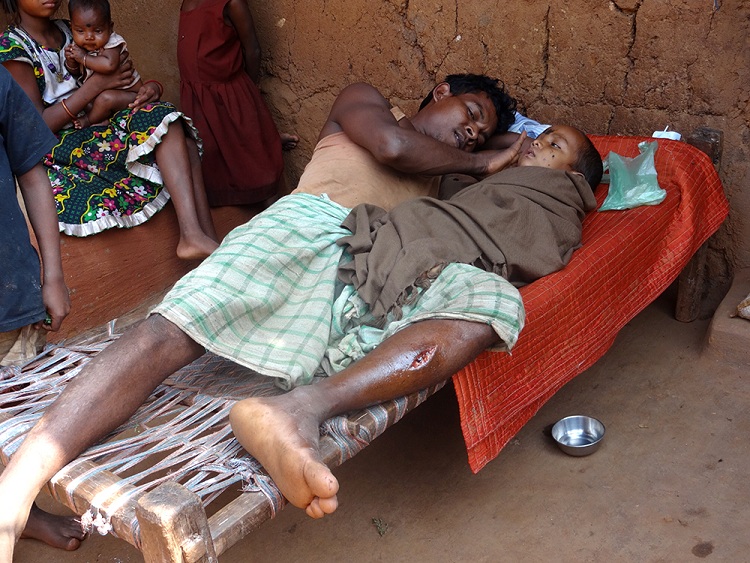 It looked like the wound might not heal so, with great difficulty, we persuaded Sukra Sabar to accompany us to a hospital in Jamshedpur. He cooperated for some time, but eventually surrendered to the fear of an injection and ran away. We learnt later that his wound had healed – his feverish daughter, however, is no more.

Have the Sabar always lived like this? This is hard to tell, but perhaps they were better nourished at least when the thick forests of Jharkhand had an abundance of wild foods, fruit, fish and game. According to historian YN Harari, the hunter-gatherers of yore enjoyed a rich and varied diet, such as “berries and mushrooms for breakfast; fruits, snails and turtle for lunch; and rabbit steak with wild onions for dinner”. If that was true elsewhere, why not in Jharkhand? Quite likely, it is the devastation of forests and wildlife in the recent past that has weakened and impoverished hunter-gatherers like the Sabar and other so-called Primitive Tribal Groups (now known as Particularly Vulnerable Tribal Groups).

My heart was heavy as we left Potka. Later on, I visited some residential schools for PVTG children elsewhere in Jharkhand. I felt that the Sabar had little hope of a better life for their children other than quality education. And that was precisely the idea of special residential schools. Alas, teaching standards in the schools I visited were dismal. These schools, run by local NGOs with government support, receive just Rs 20,000 per month for four teachers, a cook and a guard. The salary budget has not increased by a single rupee since the schools were launched in 2007. It is not difficult to imagine what sort of teachers these schools are able to attract at a wage lower than that of agricultural labourers.

Sabar families need the best schools, to make up for centuries of exclusion from the education system. Instead, they are expected to get by with some of the worst. Every year that passes without this injustice being redressed condemns another cohort of Sabar children to the prison in which their parents have lived. 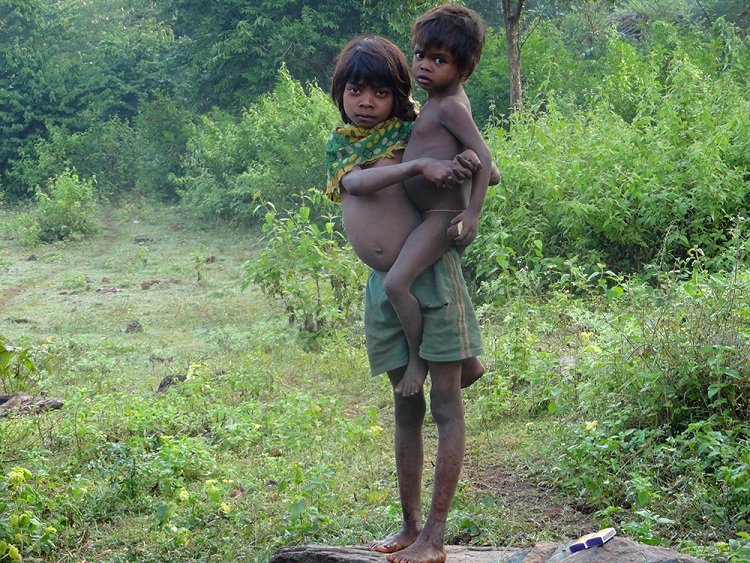