Contribute Now
Ad
For a while, it looked like the Bharatiya Janata Party was comfortable. Despite fierce rivals uniting in an effort to stand in the BJP's way, its National Democratic Alliance was nevertheless in the lead in Bihar, where elections are set to begin on October 12. But now a couple of opinion polls and the enduring preference for Chief Minister Nitish Kumar of the Janata Dal (United) have stemmed the tide, suggesting the NDA can't be complacent. 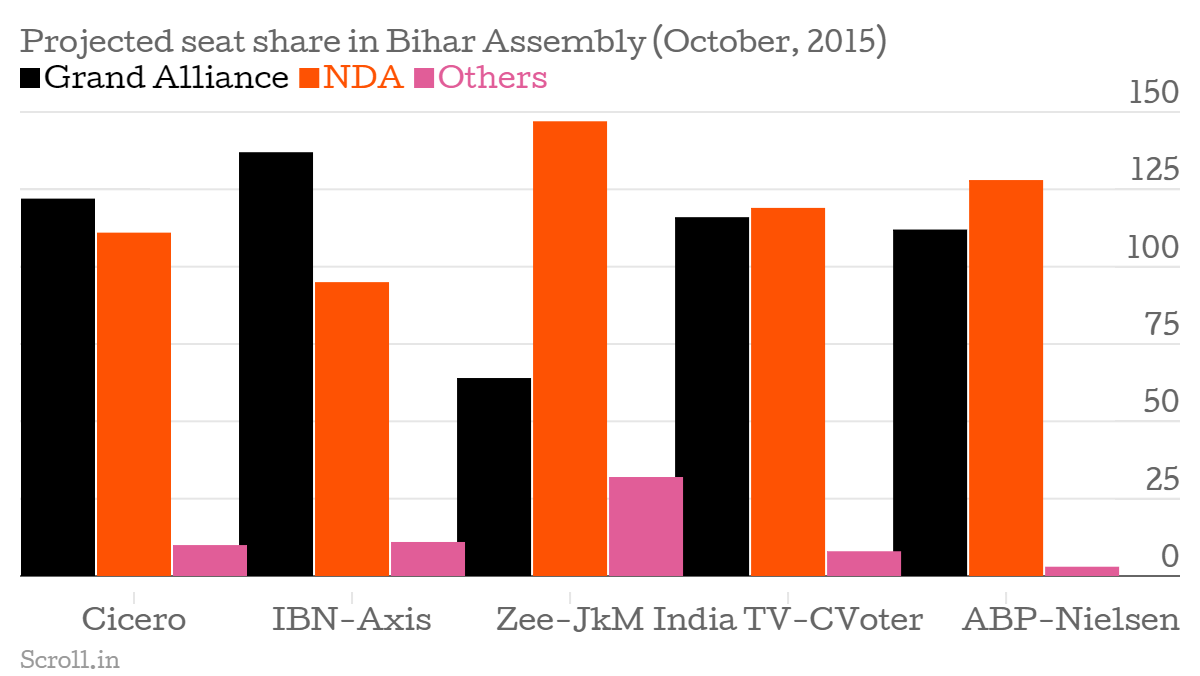 Every election since Narendra Modi became prime minister last year has broadly been about Modi versus everyone else. Initially Modi tended to win handily, thanks to his massive popularity. But the trend has been tempered by the BJP's complete rout in Delhi – thanks in large part to a truly terrible chief ministerial candidate – and the split verdict in Jammu and Kashmir.

Nevertheless, the BJP was expected to come into Bihar as the frontrunner, and solidify its position by making alliances with the Lok Janshakti Party, the Rashtriya Lok Samata Party and the nascent Hindustani Awami Morcha (Secular). This combination is expected to add a substantial portion of backward communities to the BJP's usual upper-caste constituency, turning the NDA into a formidable contender.

Up against the BJP is the mahaghatbandhan, the grand alliance, of former archrivals Nitish Kumar and Lalu Prasad Yadav. Current chief minister Kumar's Janata Dal United built its base through opposition to Yadav's Rashtriya Janta Dal and Kumar's tenure was celebrated as an end to the days of Yadav's Jungle Raj. Yet the sight of Modi leading a strong coalition forced the rivals to band together in the hopes of stopping the BJP from picking up yet another heartland state.

Initially, it was clear that the JDU-RJD combine, with the Congress also supporting, was not exactly working. The Samajwadi Party dropped out of the alliance and the party's cadres aren't exactly built to support each other. Seat sharing also turned out to be a difficult matter to deal with, although Yadav seems to have conceded the lead role to Kumar in this matter.

As of only last month, according to the India Today Group-Cicero pre-poll survey, the BJP-led alliance had a comfortable lead in projected seat share, for the assembly of 243. 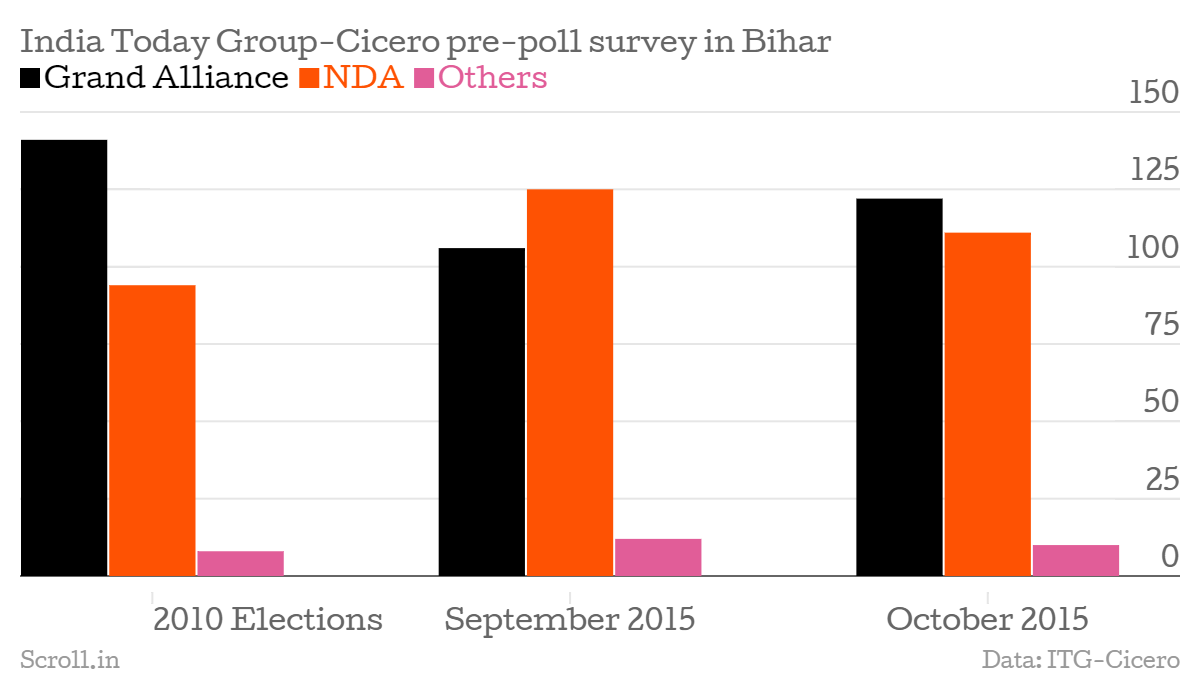 By October, however, that seems to have changed. As the earlier graph made it clear, most polls are now predicting a neck-and-neck fight, with a couple heavily swaying in opposite directions. While India's pollsters have never been the most adept at predicting seat shares, since the process of estimating vote shares and turning them into actual seats in  the first-past-the-post system is endlessly complex, the fact that a cross-section of polls is so divided is still indicative.

Moreover, the ITG-Cicero poll seems to clearly suggest something has changed over the last month. (To add a little context, the same pollsters adequately noted a shift in preferences towards the Aam Aadmi Party earlier this year, although didn't come close to estimating the unprecedented seat sharing numbers in that rout.)

A further data point, although one that is much less reliable because of the absence of a local face being projected by the BJP, is the continuing popularity of chief minister Nitish Kumar. The BJP has instead gone with its Mahrashtra-Haryana formula of sticking to Modi as the face of the party.

Lokniti-CSDS survey, which gave the NDA a 4% overall edge with the caveat of that primarily coming from the urban areas, found net satisfaction (% satisfied minus % dissatisfied) with Kumar as high as +63 compared to Modi's +54. Kumar comes in handily as the most popular chief ministerial choice across the board, with the BJP's Sushil Kumar Modi, who was deputy chief minister in the BJP-JDU years but has not been projected by the party, usually coming a good 10 percentage points behind.

With the election beginning on October 12, but set to continue for the next month across five phases, it's always possible that sudden events – like, say, a politicised lynching – might cause trends to change.