Contribute Now
Ad
On Friday, the Hindustan Times reported that Sangeet Singh Som, the Bharatiya Janata Party member of Uttar Pradesh legislative assembly from Sardhana, along with two others, had acquired land for a meat-processing plant in Aligarh.

The report said that land for the company Al Dua Food Processing Private Limited was purchased by Som, who happened to be one of its three directors, along with Moinuddin Qureshi and Yogesh Rawat.

Al Dua Food Processing Private Limited, on its website, describes itself as a “leading producer and exporter of “HALAL MEAT” from India” and a specialist in the export of “halal buffalo, sheep/lamb, goat meat and hides”.

Som, who had visited Bishara village in Dadri tehsil earlier this month and said the UP government was shielding cow killers, responded to the newspaper's questions and "admitted that he had purchased the land a few years ago but claimed that he was unaware of being appointed as a director of the company".

According to the report, Som said: “I am a Hindu hardliner hence there is no chance of getting involved in activities which are against my religion.”

Som was also quoted as saying that he would quit politics if his role in the factory was proved. Maybe he should.

Al Dua's statutory filings with the Ministry of Company Affairs show Som was a director from the time the company was founded in 2005 and remained on the board until 2008. Further, this is not the only meat exporting firm that Som has been involved with. There is also Al-Anam Agro Foods.

The address listed against his name is KA-64, Kaushambi, Ghaziabad. That is the same address he provided in his election affidavit for the 2012 elections in Uttar Pradesh.  This is what he says on page 14.

That is not all. Som was also a shareholder in Al Dua. Between 2005 and 2008, the company had three shareholders – Som, Mainnuddin Qureshi and Yogesh Rawat. Each of them held 20,000 shares.

Apart from these, Som briefly partnered Mohammad Kamil, the managing director of MK Overseas, a meat-processing company that acquired a majority stake in Al Dua in 2012, in another meat-based enterprise. That was a company called Al-Anam Agro Foods.

This company is listed as an approved meat-processing plant on the website of the Agricultural and Processed Food Products Export Development Authority.

The main objects to be pursued by Al Dua as per its Memorandum of Association is clearly listed as : "to carry on the business of manufacturers, producers, processors, buyers, sellers of and dealers in meat, meat products and preparation of all kinds, nature and description". 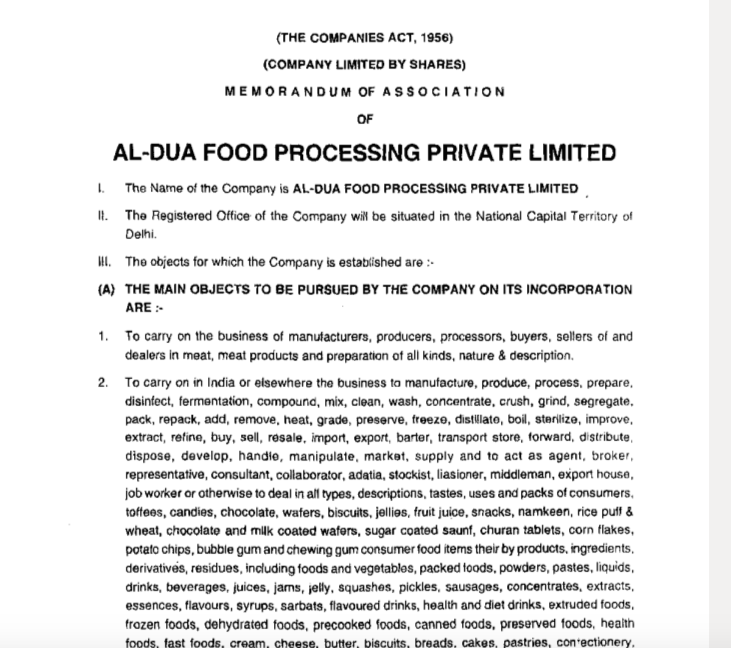 It is signed by three subscribers: Sangeet Som, Moinnuddin Qureshi and Yogesh Rawat on December 19, 2005.

His affidavits throw up other puzzles. For instance, page 8 of the election affidavit he filed for the 2012 UP elections pegs his highest educational qualifications as intermediate (12th standard). However, his affidavit for the 2009 Lok Sabha elections says he holds a BA from the KK Jain Degree College, Muzaffarnagar.

Som had been booked under National Security Act on 24 September 2013 for making speeches that instigated communal violence in Muzaffarnagar.

Scroll contacted him for his comments but he was in a meeting. This article will be updated when he responds.