Contribute Now
Ad
The diversity of materials and design that await the visitor at the Victoria and Albert Museum’s major new exhibition The Fabric of India,  is apparent right from the opening display.

The visitor is welcomed by a large cotton floor spread from the Mughal era, circa 1650, with classic repeating motifs of a standing red flowering plant with a cusped arch against a cream background and green borders. Despite the textile’s age and frailty, the vibrant colours and delicate detailing on individual flowers and leaves is breath-taking.

Juxtaposed against the large floor spread are two contemporary examples of how Indian fashion designers are rethinking and interpreting traditional techniques. One piece is a floor-length gown of acid green silk covered in 1,500 hand-embroidered butterflies in kaleidoscopic colours that glow under ultraviolet light designed by Manish Arora, one of India’s most exuberant fashion designers.  A second, more understated piece, is a simple but strikingly contemporary sari in a hounds-tooth pattern by the designers Abraham and Thakore.

The Fabric of India is a major landmark in the study and display of hand-made South Asian textiles. The exhibition includes more than 200 objects. Over two-thirds of these come from the V&A’s own collection.

The Museum’s South Asian collections trace their history back to the East India Company's Museum, which had initially been founded in 1791 at the Company's headquarters in Leadenhall Street. The collection, which was accumulated by company officials and associates, included Kashmiri shawls, silks, cottons, garments and carpets. It was acquired by the South Kensington Museum, later renamed the Victoria and Albert, in 1875, a few years after Company rule in India had come to an end.

That textiles formed the cornerstone of the East India Company's collection is hardly surprising. The Company’s first forays into India were motivated by a search for cotton textiles, which it then bartered for spices in the East Indies. The Company established its first trading port in Surat in 1612 and by 1625 was exporting approximately 2.2 lakh pieces of cloth from the port city. By the 1670s, the Company had moved away from trading for spices and focused instead on supplying textiles for the English market, a move driven by perceptive Company agents who felt that Indian fabrics might "vent well" in England.

According to historian Nick Robinson, Indian textiles made up the bulk of the Company’s trade by the 1680s. In 1684, for example, they comprised 83% of the Company’s total trade amounting to some 17 lakh million pieces of cloth, which came from as far afield as the Coromandel Coast, Bengal and Gujarat. Terms like gingham, calico, chintz, dungarees, seersucker are associated with fashion trends today but are a remnant, and silent reminder, of the textile trade of the seventeenth century. 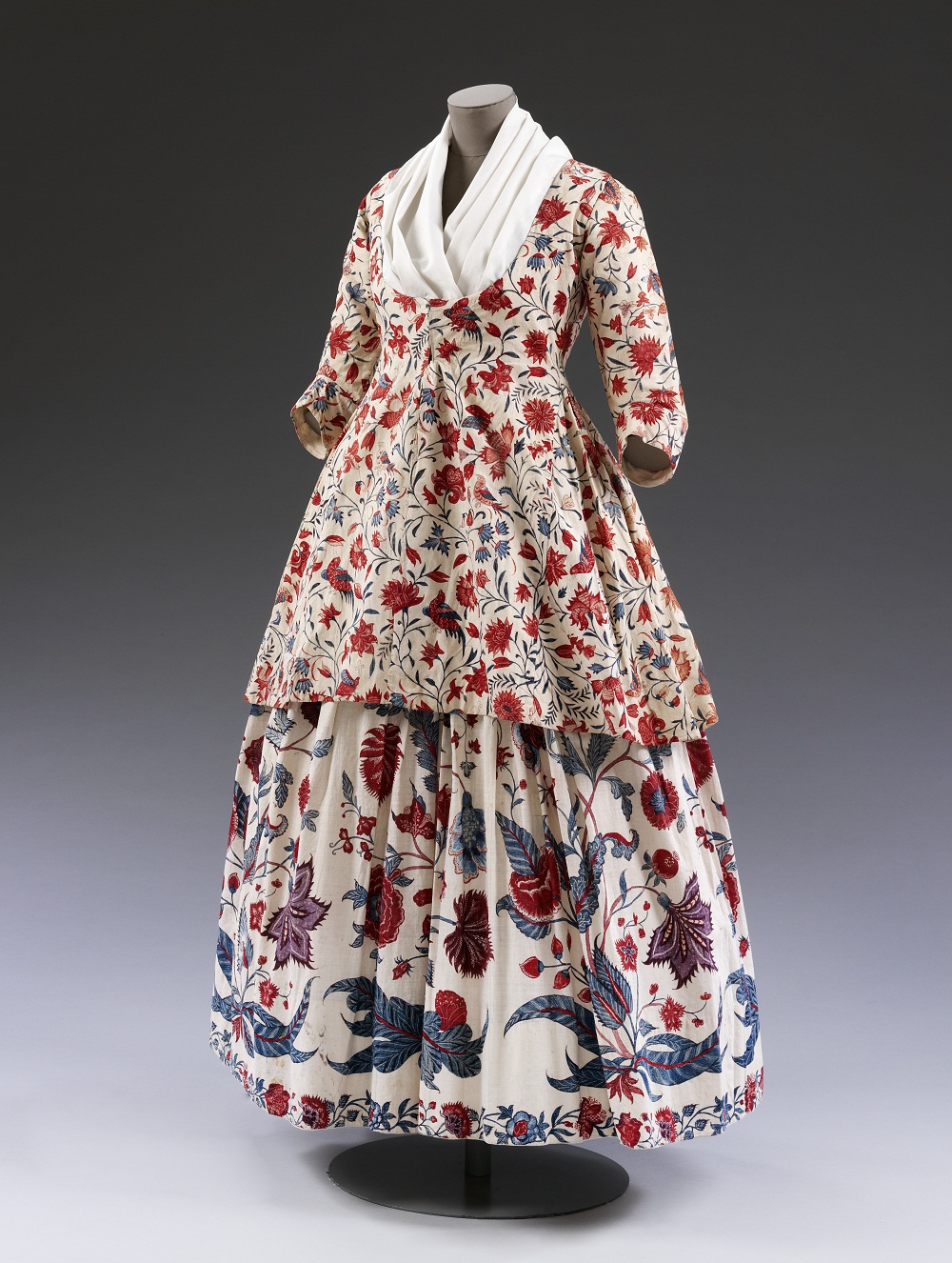 The history of the V&A’s textile collection has meant that it holds not just what Rosemary Crill, co-curator of the exhibition, describes as "very fancy stuff" but also all sorts of ordinary things. "These make the collection very important because it has examples of South Asian textiles that might not even exist anymore," she said.

For Crill, the exhibition is therefore an opportunity to showcase these lesser known pieces – many of which have been painstakingly restored for the exhibition – which either can’t be displayed as part of the Museum’s permanent collections due to a lack of space or which are often ignored by special exhibitions that tend to draw on lavish, iconic pieces. "This exhibition is about showing that it is not just about the very grand and very opulent, but highlighting that what is unique about India’s textile tradition is that it exists across the board, at every level of patronage," Crill said.

"Textile symbolism in India is hallowed by tradition. In the Rig Veda and the Upanishads the universe is envisioned as a fabric woven by the gods. The cosmos, the ordered universe, is one continuous fabric with its warp and woof making a grid pattern. Hence the importance of wholeness, not only of the uncut garment, like the sari or the dhoti, but also of the cloth woven all in one piece, on which a sacred picture is to be painted. Whether as a cover for the body or as ground for a painting, the uncut fabric is a symbol of totality and integrity. It symbolises the whole of manifestation."

Crill argues that this intertwining of cloth and myth could only take place in a culture in which weaving had occupied a central role for many centuries. A combination of unique natural textile fibres and dyestuffs have led to almost every region within India developing its own textile specialties, whether in weave, dye, print or embroidery – and sometimes a combination of several of these.

The initial parts of the exhibition aim to bring this diversity of materials and processes to life, in particular by examining how fabrics are made, what they are made of and processes and techniques used in the production of speciality textiles. Such an approach ensures that the exhibition provides a base understanding of the subject to the wide variety of people visiting the exhibit, exposing them to discussions about fibres (cotton, silk, wool, pashmina, tus), dyes (the vivid indigo, of course, but also lac and other colourants), dying processes (which produce the fabulous geometry of ikat, the vibrant lahariya and bandhani, and sophisticated motifs of ajrakh), weaves, looms and embroidery.

Following from this, the exhibition also seeks to highlight both local and global patterns of patronage and use that led to the continuity and refinement of textile weaving and design in India. The use of textiles for rituals, for example, extends across religious groups in the subcontinent; the exhibition showcases some fabulous historical examples of temple hangings, pichwais (textile paintings hung behind the image of the deity and particularly associated with the shrines in Rajasthan and Gujarat) and shrine flags. One particularly interesting chintz wall hanging dating from the 1760s was made for an Armenian church and shows the scene of Christ’s crucifixion. 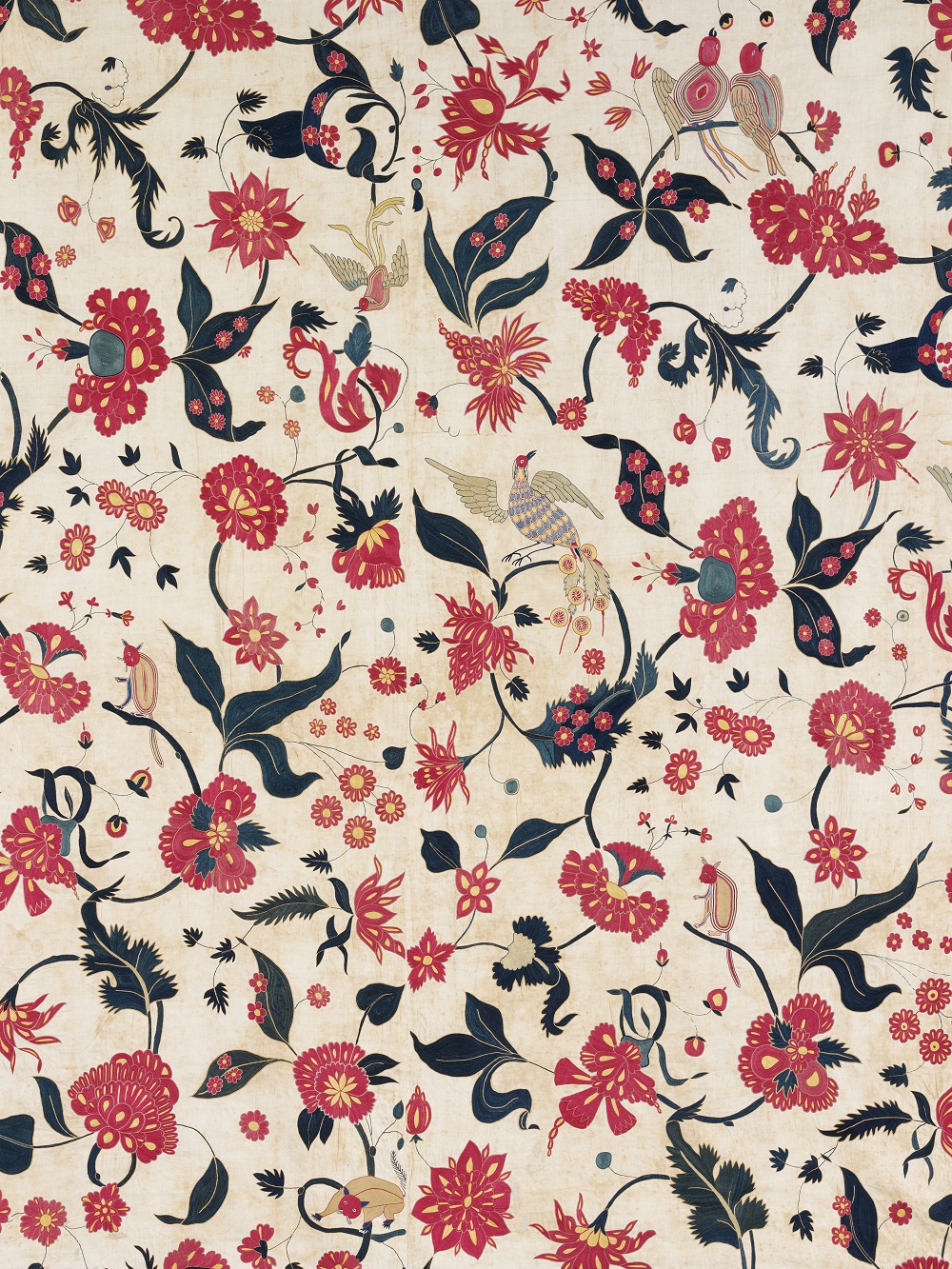 The most exquisite examples of textiles were, however, produced for patrons at the highest level – the rulers and the royal court, be it the Mughals, the Daccani Sultans, Marathas or Rajputs. One of the finest items of the exhibit is a densely decorated Mughal riding coat in white silk associated with the reign of the Emperor Jahangir. The coat has a repeating pattern that includes a pair of reclining lions, a lion hunting gazelle, a scene of ducks on a pond and a peacock in flight in addition to very Europeanised floral details such as poppies, daffodils, primroses, irises and tulips.

Examples of royal textiles aren’t just restricted to clothing. Of particular importance was the role textile played in interiors, given the absence of freestanding furniture. The curators of the exhibit note that when the court was on the move, palaces themselves could also be made of cloth in the form of royal tents with their beautifully decorated interiors with woven, embroidered or printed floor coverings and hangings. One of the biggest draws of the exhibition is just such a tent – fully set up in the exhibition space so the visitor can see its remarkable rich, floral drapes – which once belonged to Tipu Sultan.

In addition to catering for a local market, India’s textiles also made their way to other parts of the world. India dominated the supply of textile across the globe until the period of western industrialisation and the exhibition also explores the versatility of India’s exports. A set of fragile 19th century handkerchiefs, for example, bring to life the extent to which Indian cloth infiltrated the everyday lives of people around the world.

In Europe, and Britain in particular, it was chintz and muslin that became deeply associated with the Indian textile trade. The bright, colour fast, and exotic patterns of chintzes as well as the cotton fabric itself – which was new to the West – were instantly in demand for home furnishings, and later, for clothing and the exhibition showcases some wonderful examples of chintz bed and wall hangings and garments.  These bring to life the ubiquity of Indian textiles in England by late 17th/ early 18th century and the words of the author Daniel Defoe who described how "everything that used to be made of wool or silk, relating to either the dress of women or the furniture of houses, was supplied by the India trade".

While on one hand the textile trade increased India’s standing as a producer of highly demanded fabrics, these very textiles also played a role in India’s colonisation and drain of wealth. Once it had established its presence in India, the quantities of textile trade the East India Company was able to engage were increasingly achieved by severe exploitation of agriculturalists and weavers by the Company.

Particularly egregious were the Company’s attempts to force weavers into exclusive contracts. Despite paying lower wages than other buyers, exclusivity was ensured through threats and violence by the Company’s sepoys. Such practices helped the company establish a virtual monopoly over the textile trade over time. This in turn only spurred a variety of unsavoury practices aimed at pushing down prices even further. By one estimate, the Company’s gomastas were able to pay "in all places at least 15% and in some even 40% less" than the weaver would receive in the public bazaar.

In England, the flood of Indian textiles led to the introduction of protective barriers that aimed to protect domestic producers. This version of import substitution proved hugely successful in supporting developments in spinning and printing technology that meant that by 1793, a Lancashire mill operative had become 400 times more productive than the average Indian weaver. By the early 1800s, cotton cloth was being sent from England to India in a dramatic reversal of trade. Between 1850 and 1880 the quantity of cloth woven in India fell by 40%. India, the world’s greatest producer and exporter of textiles, had been reduced to exporting raw cotton and importing foreign cloth.

The Fabric of India, supported by Good Earth India, with thanks to Experion and Nirav Modi, is at the Victoria and Albert Museum from October 3, 2015- January 10, 2016.