The catalogue to the Victoria and Albert Museum’s "Fabric of India" exhibition opens with a Mughal miniature (circa 1590) depicting the Prophet Idris introducing mankind to the concept of wearing tailored garments instead of animal skins. The dominant image of the painting is Idris, shown presenting bales of cloth to men dressed in fur. More interesting, perhaps, are the details in the background which show the various stages in the production of cotton cloth.

For an Indian observer, these scenes aren’t a remnant of some long forgotten past but very much reminders of the present. As the curators note, all of these processes – from washing and cleaning the cotton, preparing the warp to weaving the cloth on a pit loom – are processes still carried out in India today.

Despite industrialisation and globalisation, India's textile ministry estimates that handloom weaving provides employment to more than 4.3 million weavers and allied workers. Handloom contributes nearly 15% of cloth production in the country, and India accounts for 95% of the world’s handwoven fabrics. Despite the steady fall in the number of people working in the handloom textile sector, this resilience of handwoven fabrics – at a time where fast fashion and mass produced textiles are the norm globally – is an anomaly. 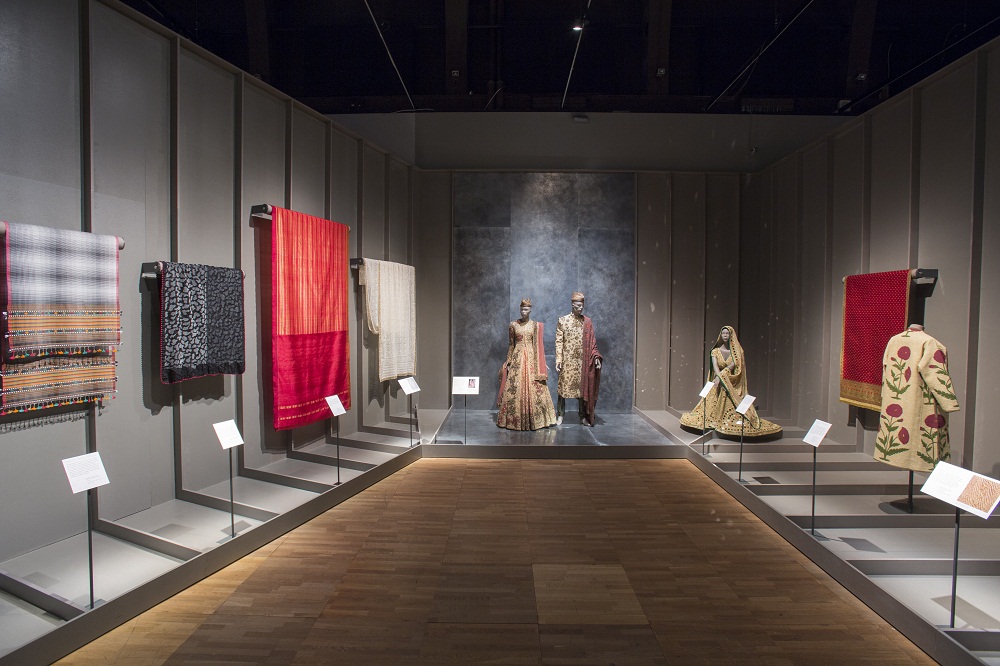 One central reason for handloom’s survival is the key role textiles played in the anti-colonial movement. The exhibition explores the political symbolism indigenous textiles acquired as a result. Textiles became overtly political in India in the early 1900s with the rise of the Swadeshi movement, a key political ideology in the anti-British agitation in the country.

During the partition of Bengal in particular, dissent was demonstrated by incidents where western clothes were thrown into large bonfires. Swadeshi gained even more importance once it was adopted by Mohandas Gandhi. Lamenting the harm "Manchester has done to us", Gandhi declared that "foreign cloth must be totally banished from the Indian market, if India is to become an economically free nation".

In sync with his vision for a village-led, self-sufficient economy, Gandhi called for Indians to take up spinning yarn and weaving and wearing khadi, a simple hand-spun fabric. So central did textile self-sufficiency become in the larger cause of Indian self-rule that members of the Indian National Congress began wearing khadi as part of their official programme of resistance and incorporated the spinning wheel in its flag design.

Post independence, a number of institutions such as the All India Handloom Board, the Khadi and Village Industries Commission and the Weavers Service Centres worked towards modernising and revitalising handloom. Institutions such as the heavily subsidised Khadi Gramudyog Bhavan and the more middle class FabIndia have made hand-woven fabrics and traditions accessible to the mass market in India and continue to compete with high-street fashion chains that have entered the country since liberalisation.

Institutions like the National Institute of Design and the National Institute of Fashion Technology have produced designers and couturiers who engage with Indian textile traditions in innovative way. The V&A exhibition also provides visitors a panorama of these more recent developments in contemporary textile and fashion design in India. Co-curator Divia Patel told me, "People think they know what Indian textiles look like, but we wanted to surprise them and show them there’s much more to learn about craftsmanship and textiles in contemporary India."

Onus on the fashion industry

If at first it was government institutions that led India’s engagement with its textile heritage post-independence, it is now the booming fashion industry. Consumption and awareness of fashion has exploded since liberalisation – especially because there are more working women with higher disposable incomes – making the domestic fashion industry a sustainable proposition.

For David Abraham of Abraham and Thakore, the growth in the use of technology and social media has only fuelled this trend by making self-image and fashion a key feature of people’s lives. In particular, he cited the surge of interest in the sari in metropolitan cities as an example of this self-branding. Abraham noted that Indian consumers are the most culturally specific in the world when it comes to fashion. "They might buy a dress from Zara but wear it with pants or leggings so willy-nilly the dress becomes a kurta," he said. 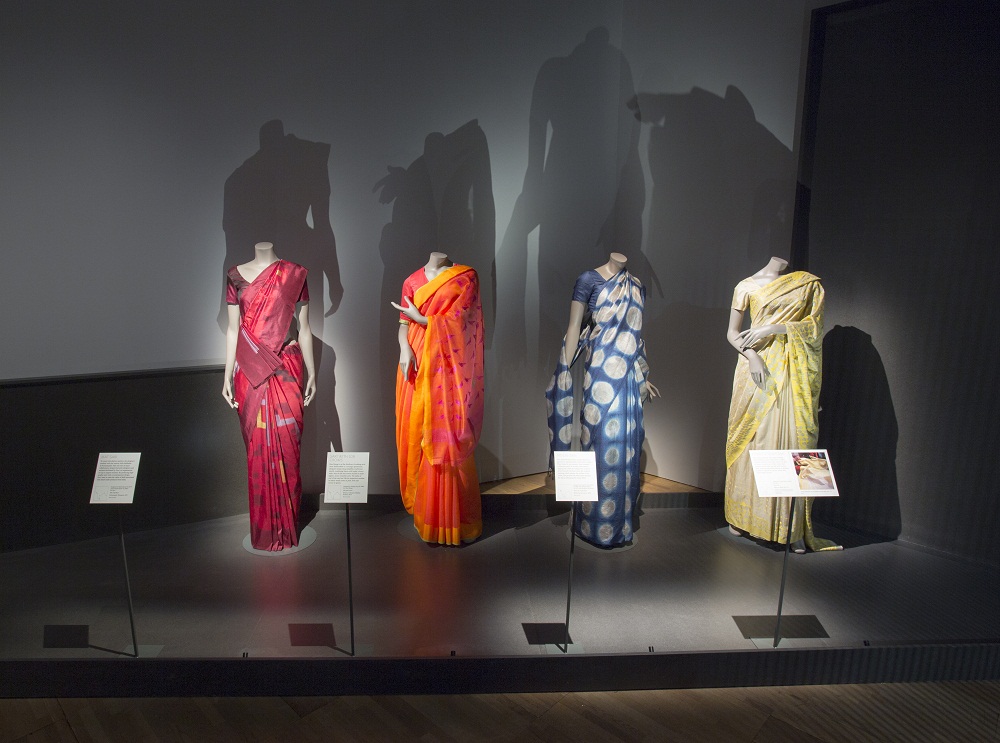 This strong connection the India consumer has with traditional silhouettes, embroideries, textiles and forms of dress, especially when it comes to big events such as weddings, has also played significant role in Indian designers engaging with traditional weaves and embroideries. The aim of recreating ultra-luxurious designs reminiscent of the decadent Indian past has had enough of an impact for Patel to note that the quality of contemporary craftsmanship in garments produced by high-end designers such as Sabyasachi Mukherjee is comparable to some of the best historical examples the V&A has in its collections.

Among the many contemporary designers showcased at the V&A exhibition is Sanjay Garg, whose brand Raw Mango does a modern take on the sari, playing with colours, patterns and weaves to make the traditional garment more wearable. Garg played a key role in the popularisation of chanderi silk saris and his work continues to be driven by experimentation and reinvention of historical weaves.

At a meeting, Garg was preparing his collection, which recently opened the Amazon India Fashion Week’s 2016 Spring/Summer edition. Garg’s collection highlighted a weave called mashru. Meaning permission in Arabic, mashru is woven in a combination of cotton weft and silk warp and was originally meant for Muslim men prohibited from wearing pure silk. The cotton weft is the lower layer in contact with the skin, while the silk warp shows on the surface.

Garg’s work is heavily steeped in history and he collects and researches old fabrics and techniques in a bid to revive and reinvent them. This was also the case with his experimentation with mashru. Though traditionally a weave associated with Gujarat, Garg noticed that the Albert Hall Museum in Jaipur had a number of mashru pieces that traced their origins to Varanasi. Garg was able to locate pockets of weavers in Varanasi who were descendants of mashru weavers. Though they hadn't themselves woven the fabric, they were able to pool together oral histories and knowledge and work with the historic samples Garg had collected to bring to life his vision of a modem-day mashru textile. Garg’s story is but one of the several examples where high fashion has led to a revival of once dead or dying techniques.

Another example of technique revival the exhibition explores is that of chikankaari, the traditional white on white cotton embroidery associated with Awadh. Decline in patronage after partition slowly led to a fall in the quality of the embroidery work, until greater involvement of designers and the NGO SEWA sought to revive the more delicate craftsmanship in a bid to produce refined garments that would appeal to an elite metropolitan audience.

A constant theme in textile preservation in India today is the sustainability of weaving traditions, especially in light of modern-day designers gaining brand recognition while the artisans – essential in bringing to life the designer’s vision – remain anonymous. Some argue that the very government subsidies that have kept handloom fabrics in India affordable have also impacted their value and the wages weavers earn for producing them.

David Abraham and Sanjay Garg both argue that for handweaving in India to have a sustainable future it has to transition to the luxury or affordable luxury segment, which would then make compensation for the weaver commensurate with their effort and skill. For Abraham and Garg, what is important is customer awareness of the skill and craft that goes into producing a fabric and a willingness to reward the weaver for the quality of their work.

There is a move in this direction. The finale of the recent Amazon India Fashion Week was themed "Born in Banaras", with 16 designers showcasing their interpretation of the iconic Banarasi weave. Sitting in the audience were the weavers themselves in a fitting symbol of the coupling of fine craftsmanship with contemporary fashion.

The challenges to the fabrics of India are still many and the story of how Indian textiles will evolve and sustain themselves is one that is clearly still unfolding. But the V&A does full justice to the story of their journey thus far and their importance in India’s culture, politics and religions.

The Fabric of India, supported by Good Earth India, with thanks to Experion and Nirav Modi, is at the Victoria and Albert Museum from October 3, 2015 to January 10, 2016.