Contribute Now
Ad
Fit, lean, with inquisitive eyes, 22-year-old R Hariramakrishnan prefers to be called Kiccha. Dressed in jeans and red T-shirt with the collars rakishly turned up, he loads crates of soft drinks for a living near his home in Namakkal town in Tamil Nadu, and is keenly aware of his caste. His motorbike licence plate has a sticker hailing him as “Veera Paraiyar” (Braveheart Paraiyar).

Pariayars are Dalits and Kiccha has indeed done something brave: he's married a Brahmin woman in a region where Dalit men are being killed for marrying women from the higher castes.

“Meena and I fell in love in school itself,” he grins shyly. “She is from the Saurashtra Brahmin community which settled here generations ago. Her parents vehemently opposed the marriage. They let her go only after she tried to commit suicide by jumping off the third floor and broke her spine."

It took five years for the couple to tie the knot. Kiccha barely makes Rs 5,000 a month. Meena, born into an affluent family, now lives with him in a small single-room rented house in Natarajapuram, a congested Dalit locality with matchbox-like houses. The neighbouring Pettai Colony has large apartments that are home to a mix of Saurashtra Brahmins, Vanniyars and Kongu Vellala Gounders, the affluent upper and middle castes.

"Her parents disowned her after we got married," said Kiccha. "They have not even seen our one-year-old child, despite Meena being their only daughter." 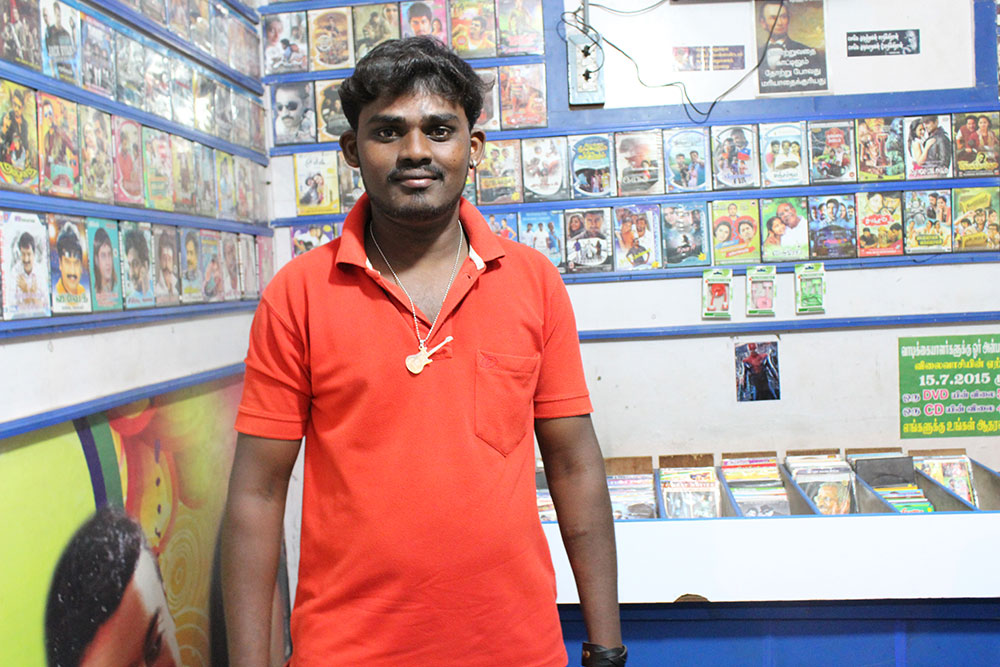 Kiccha had to fight many battles to marry a girl of a higher caste.
All photos: Sandhya Ravishankar

In Tamil Nadu, Dalits belong to three main sub-castes – Pallars, Paraiyars and Arundhatiyars. Of the three, the Arundhatiyars (locally called Sakkiliyar, originally a cobbler caste), form the bulk of the Dalit population in the western Kongu belt of the state, where Namakkal is located. Election Commission of India records show that over 19% of the total population of Namakkal district is Dalit.

The trickle-down effect of the growing economy and rapid urbanisation, coupled with reservations, has made education more accessible for Dalits. “When I was young, hardly anyone in Natarajapuram went to school,” said Sella Anbu, 38, a vegetable vendor in the area. “Now everyone finishes at least the tenth standard. Many Dalit youngsters go to college. They want to make something of themselves." 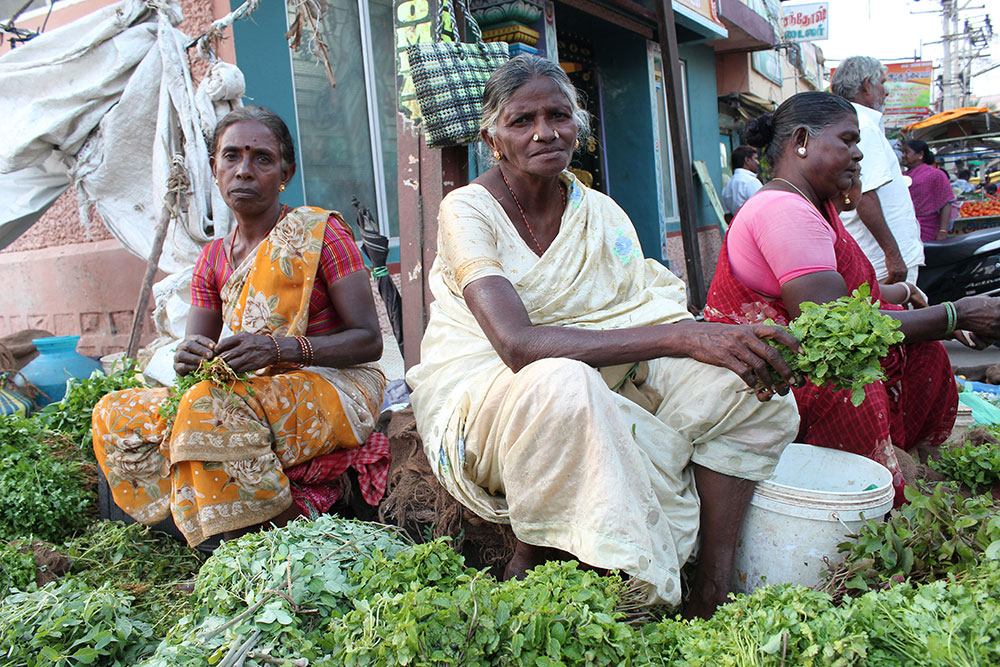 Vegetable vendors at the Natarajapuram market in Namakkal town.

About 27 kilometres away from Namakkal town, the story is similar. Tiruchengode, a temple town, home to the famous Ardhanareeswarar temple, is also witnessing change. Five colleges have sprung up in and around Tiruchengode in the past seven years. Thousands of students of different castes study together, build friendships and invariably fall in love.

But the older generation is still deeply caste-conscious and the romances of the young become catalysts for fury. A perceived love affair between a Dalit engineering student V Gokulraj and his friend, a girl from the dominant Gounder community, led to his being murdered in July.

It isn't just the Gounders, the dominant caste in western Tamil Nadu – the Thevars, dominant in southern part, and Vanniyars, influential in the northern region, have also violently opposed intermarriage with Dalits. Gokulraj's murder was, in fact, an eerie throwback to the alleged suicide of another Dalit youth, Ilavarasan, in Dharmapuri last year. In that case, the trigger was a marriage between Ilavarasan and a dominant caste Vanniyar girl Divya. 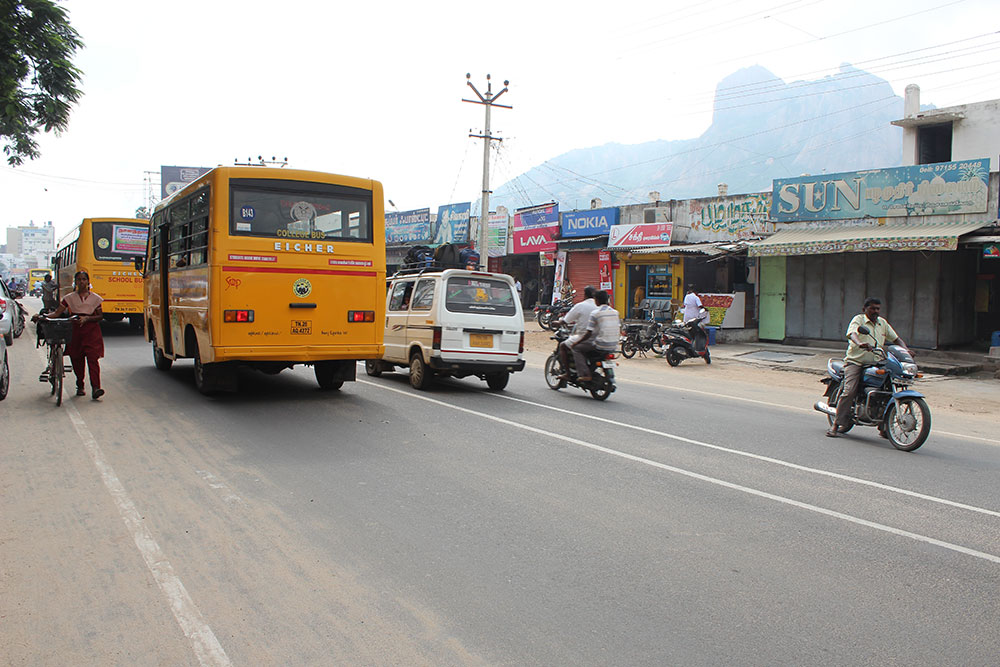 College buses throng the streets of Tiruchengode in the backdrop of the Ardhanareeswarar temple atop the hill in the distance.

Political parties that claim to represent the dominant backward castes have capitalised on the anti-Dalit sentiment. GK Nagaraj, founder of the Kongunadu Jananayaga Katchi (Kongunadu Democratic Party), an outfit affiliated to the Gounder caste, made perfunctory noises about equality before stating his party's position. “I agree that all people are the same and we must not distinguish between Dalits and other castes," he said. “But caste has been present for so many years. It cannot change overnight, can it? We have to look at these things practically. How can we just accept Dalit boys marrying our girls?”

In December 2012, S Ramadoss, the leader of Pattali Makkal Katchi, with a support base among the Vanniyars, gave a call to representatives of all backward castes to come together under an umbrella federation which he called Anaithu Samudaya Periyakkam (Federation of All Social Organisations). Their issues were common – amendment of the Protection of Civil Rights Act and the Prevention of Atrocities against Scheduled Castes and Scheduled Tribes Act, which they claim Dalits use to foist false cases against others, and the problem of Dalit boys luring backward caste girls and extorting money from them.

At the event, Ramadoss explicitly targetted the Dalit community. “They wear jeans, T-shirts and fancy sunglasses to lure girls from other communities,” he said. A resolution was adopted at the meeting stating that inter-caste marriages were inherently flawed, which resulted in a higher rate of divorce, and reiterated that the Dalit community was at fault.

The PMK has since tried to refurbish its image, projecting Ramadoss’s son and former Union Health Minister Anbumani Ramadoss, the Lok Sabha MP from Dharmapuri, as a chief ministerial hopeful, speaking of development and change. Anbumani is now trying to reach out to a larger cross-section of voters but is unable to shed his party’s caste affiliations.

“I can’t speak on behalf of the Vanniyar community,” he told Scroll.in. “I can tell you about the general feeling amongst the community. SCs and STs definitely need protection, we are not disputing that. But the general feeling is that a lot of elements are misusing the SC-ST Act. We need more checks and balances to ensure that this does not happen. We are demanding a judicial mechanism at the district level to ensure this.”

The age of marriage

Another common demand, mooted by the PMK and seconded by other caste-affiliated parties, especially the Kongu outfits, is that the legal marriageable age of girls should be raised to 21 years. Their rationale is that this would prevent young impressionable girls from getting infatuated with boys from other castes. In a party meeting before the 2014 Lok Sabha polls, the PMK went one step further, passing a resolution that girls should only marry with consent from their parents.

The PMK leaders claim the demand is rooted in a scientific rationale. “Our policy is that marriageable age of girls should be 21 because they are emotionally, mentally and physically mature only at 21,” argued Anbumani Ramadoss. “The PMK has never been against love marriage. Love at 16 years of age is not love, it is infatuation. Lots of parents come to me and say their daughters have run away. It is not specific to any community. Most of the girls are minors, they run away, that is the issue."

Hindutva outfits have also entered the fray, arguing that inter-caste marriages have caused social tensions across communities. Arjun Sampath, the state president of the Indu Makkal Katchi (Hindu People’s Party), said: “Some elements deliberately make girls fall in love in order to extort money from her parents and ask for a share in property."

Rigid stances of this sort have forced similar ones from the Dalit side. In May, Dalit groups conducted a Penn Ketkum Perani (Rally to ask for girls), asking for the hands of Gounder girls in marriage. Dalit leader Thol Thirumavalavan, former Lok Sabha MP of the Viduthalai Siruthaigal Katchi (Freedom Panthers Party), addressed a rally in Namakkal, asking Gounders at large: “What can we do if your daughters are coming behind us?”

The life of couples

On the ground, the backlash against inter-caste marriage is making many young couples flee their villages and head to small towns like Velayudhapalayam, about 30 kilometres from Namakkal. The anonymity of urbanisation and the availability of jobs in factories offer them some hope and peace.

Manikandan* and his young wife Valli* are among hundreds of couples in Gandhi Nagar, Velayudhapalayam. Both are from the same village. While he is Dalit, she is Vanniyar. “When our parents and villagers found out they said they will ostracise us from the village," he said. "There was too much pressure. We couldn’t find a way out. Our friends here helped us to set up house.”

For all the rhetoric about the newfound affluence of the Dalits, in the neighbourhoods where the couples live, access to basic services remains poor.

In Namakkal’s Natarajapuram, both men and women relieve themselves on the banks of a canal filled with sewage. There are no toilets in the area. Poverty combined with an average of four children per couple means that boys as young as 13 years of age are sent out to work in Namakkal’s famous truck body-building industry. 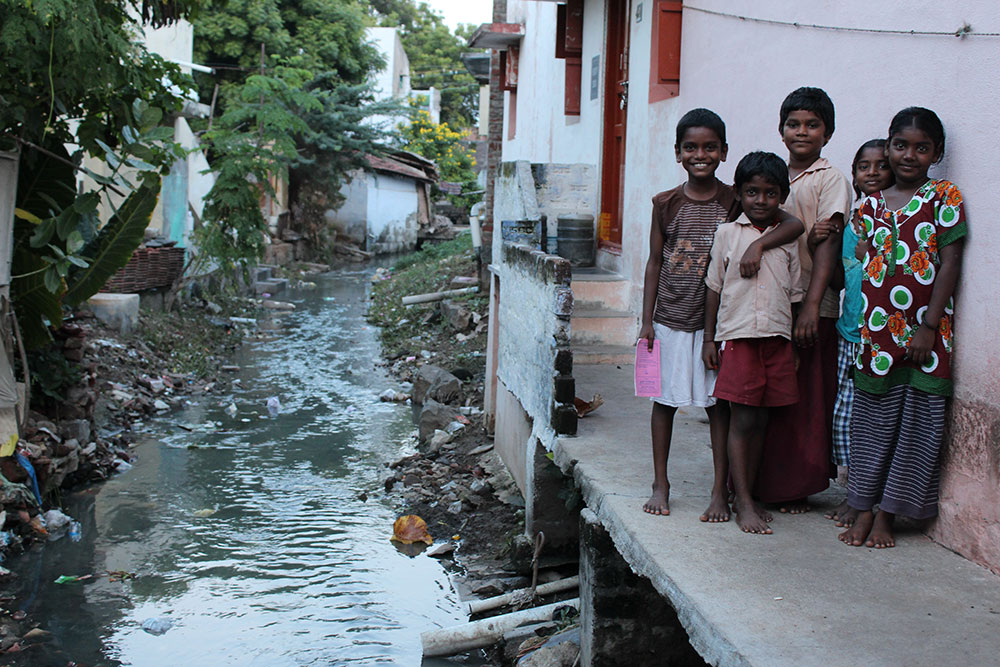 Dalit children in Natarajapuram grow up in the midst of squalor as a sewage canal runs through their colony.

“Most of our boys paint the trucks,” said Sella Anbu, resident of Natarajapuram and a member of the Dalit party, Viduthalai Siruthaigal Katchi. “It is a tough job. They see money early in life and begin consuming liquor as it relieves body pain after a long day. They become alcoholics over a period of time,” he rued.

Kalaivani Devendran, 28, who runs a slipper stand near Natarajapuram, agrees. “The boys here drink, smoke, do drugs and roam around teasing girls in the area,” she said. “My father has always been a drunkard and is unable to work. There are lots of deaths due to alcoholism here."

Dalit youth also complain of discrimination at job interviews. Twenty three-year-old Rangarajan Sekar, a diploma holder in Electrical and Electronics Engineering, was forced to move to Orissa for work. He could not get a job in the town. “Every time I went to a job interview, they would ask me which area I was from,” said Rangarajan. “When I said Natarajapuram, I was instantly rejected."

Caught in the struggle for jobs and a life of dignity, Dalit men come under further strain when they fall in love with a higher caste woman. To escape the wrath of the woman's community, they must flee their homes, and life in exile is tough.

Manikandan wishes he could go back to his village with his wife. They both miss home and the support structure of family. "We have left everything behind for love," he said. "Of course, our friends here support us, but once we have a child what do we do? We are both working. Back home, we could have asked our families to take care of the child and gone about our work."

Valli misses her mother and sister. "I talk to them once in a while over the phone," she said. "It is very difficult to be away from loved ones. I cry often."

* Some names have been changed to protect identities.