Oct 21, 2015 · 04:30 pm
Andrew Coates, The Conversation
It makes our most turbulent terrestrial storms look like mere pipsqueaks. But remarkable new Hubble footage shows that Jupiter’s Great Red Spot – an anticyclonic storm system twice the size of Earth – is shrinking and turning orange. Is this evidence of Jovian climate change? And could the planet’s violent storm finally be giving way to more clement conditions, at least by Jupiter’s dramatic standards?

Jupiter, the largest planet in our solar system, is a gas giant dominated by hydrogen with some helium and smaller amounts of other gases, a mixture that resembles the composition of the early solar nebula and results in some staggeringly beautiful weather. The planet’s cloud systems, which counter-rotate in zones and belts, with eastward and westward winds reaching 100 metres per second, are among the solar system’s most spectacular sights and come in a blaze of different colours – red due to ammonia, white due to ammonium hydrosulphide, and brown and blue due to additions to water ice.

But one of the most recognisable and persistent features of Jupiter’s atmosphere is the Great Red Spot. Swirling around the planet’s southern hemisphere, it covers a huge 10 degrees of latitude.

Spinning globe of Jupiter, made from the new Hubble map.

This vast anticyclonic – high pressure – storm system has been observed raging for perhaps 350 years – the first likely observations were reported in 1664-1655 by Robert Hooke and Gian-Dominique Cassini. It is cooler than its surroundings, rotates anticlockwise with a four to six-day period, and is located between zonal winds moving at 100 metres per second.

The Great Red Spot’s stability over such a long period of time is remarkable. A fluid instability would disappear in a few days to weeks, as in the case of the scars caused when several fragments of the comet Shoemaker-Levy 9 struck Jupiter in 1994 – so an energy source must be powering it. Models have been suggested, but none fully explain the Great Red Spot: is it really a hurricane, a shear instability, an eddy or a solitary wave?

Inside the pressure cooker

We know that Jupiter emits 67% more radiation than it receives from the Sun. This is due to an internal heat source, which is thought to drive much of Jupiter’s weather, including, presumably, the Great Red Spot. The heat likely is generated by the gradual contraction of matter under Jupiter’s enormous gravity. In the planet’s deeper layers, for example, hydrogen enters a liquid metallic state and the pressure is 3m atmospheres. 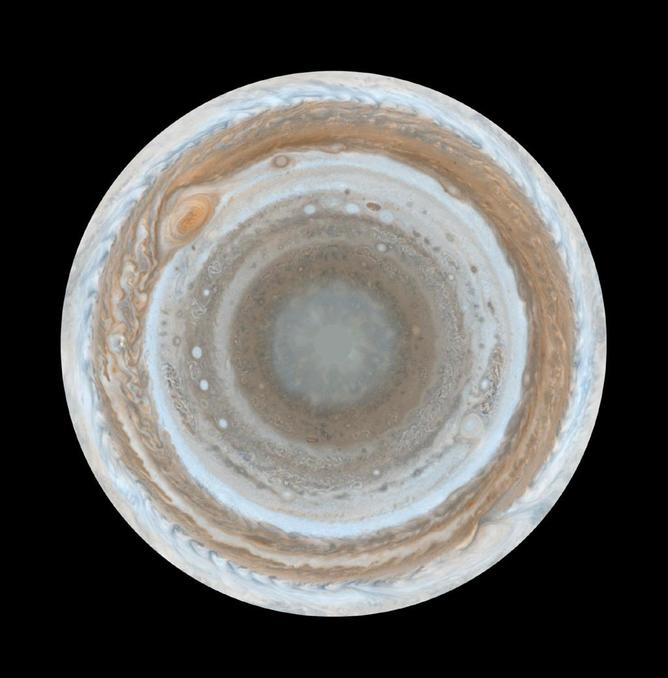 We also know that after years of relative stability, the Great Red Spot is now changing. Since 2012, Hubble observations as part of the Outer Planets Atmospheres Legacy programme have shown that the spot has been shrinking – and that the rate of shrinkage has increased in recent years. The latest measurement, published by Amy Simon and colleagues, show a further reduction of 240 km, although this rate of shrinkage is less than in preceding years and there are not enough observations yet to know if this is a periodic feature as seen with Neptune’s great dark spot.

It is not just a matter of size, however. The Hubble results also show that the spot’s shape is continuing its evolution from oval to circular, and that a new wispy filament, spiralling inwards and driven by winds of at least 150 metres per second, has developed within the Great Red Spot. The core region has also been shrinking, consistent with the overall trend, and is also becoming less distinct. It is also now deep orange in colour.

There are other changes in the Jovian atmosphere, too. The Hubble observations show a new wave structure about 16 degrees north of Jupiter’s equator, in a region of cyclones and anticyclones. It is similar to the only previous observation of such a structure by Voyager 2 in 1979 and may herald the birth of a new cyclone there.

In Jupiter’s North Equatorial Belt, scientists spotted a rare wave that had been seen there only once before. NASA, Author provided.

The jury is still out, but continued observations by the annual Outer Planets Atmospheres Legacy campaign, combined with in-situ measurements of the atmospheric dynamics and interior structure, may yet reveal intriguing new clues. The JUNO polar orbiter will also reach Jupiter in July next year and doubtless offer answers of its own.

Jupiter’s mysterious Great Red Spot may be shrinking, then, but the world will be talking about Jupiter’s weather for a good while yet.