Contribute Now
Ad
The beautiful Kashmir Valley has over a thousand small and large water bodies, which are the bedrock of both its ecology and its economy. Unfortunately over the last century, massive urbanisation around these water bodies has led to pollution, siltation due to deforestation and overexploitation of the many streams and lakes. Many have shrunk to a fraction of their original size while some have all but disappeared.

According to the State Water Mission, water bodies in Kashmir are the worst victims of human interference and rapid urbanisation. Massive erosion in the catchment area is resulting in these lakes becoming silted up, thereby converting water areas into landmasses.  Other water bodies have disappeared due to natural causes like glacial action and low precipitation. Some are on the verge of extinction.

More than 50% of water bodies in Srinagar and its suburbs have been lost during the past century, Humayun Rashid and Gowher Naseem of Srinagar’s Directorate of Environment, Ecology and Remote Sensing have concluded in a study.

“During the past century, deforestation in the Jhelum basin led to excessive siltation in most of the lakes and water bodies of Srinagar and subsequent human greed brought about sustainable reclamation and land-use change in these assets of high ecological value,” the study said. More than 9,119 hectares of open water surface and wetland have disappeared between 1911 and 2014, while only 6,873 hectares were preserved. 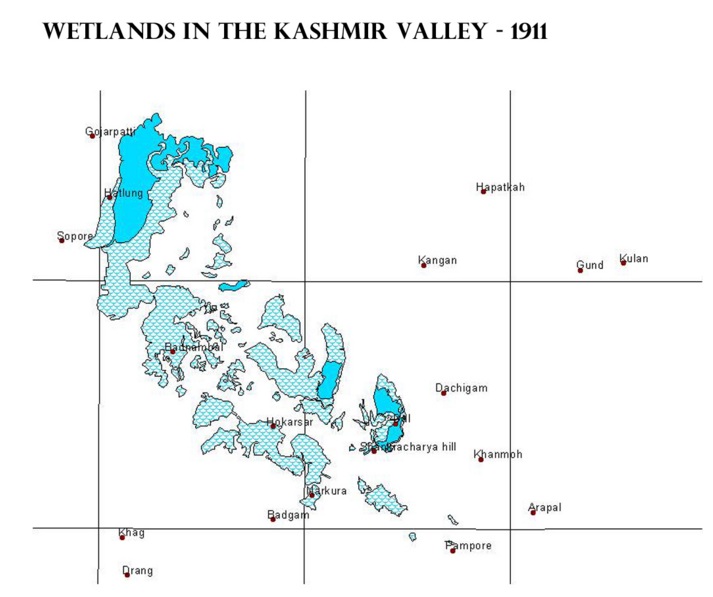 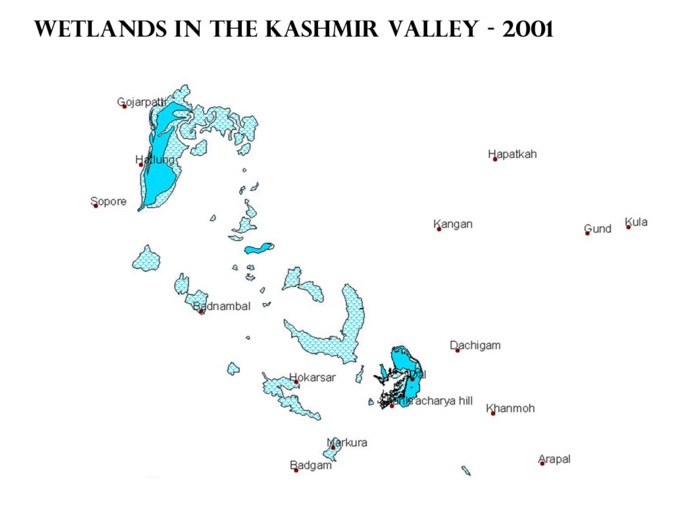 The marshy and water body area of Dal Lake, a major tourist attraction in Srinagar, has shrunk from 2,547 hectares in 1971 to 1,620 hectares in 2008, estimated a paper titled Impact of Urban Land Transformation on Water Bodies. Although it has lost almost half of its water surface area in 40 years, it still looks like a water body. Adjoining lakes like Gilsar, Khushalsar and Aanchar have all but disappeared because the drainage system of the Dal which used to feed these small water bodies has been converted into landmass through heavy siltation.

Shakil Romshoo of Kashmir University’s Earth Sciences department has suggested that measures like de-siltation of water bodies and afforestation programmes in catchment areas of the Jhelum, Kashmir’s major river system, should start on a war-footing while construction should be totally banned in ecologically fragile areas.

“If the indifference of successive governments and the greed of the society at large have led to the degradation of our water bodies, we at least have to think of measures to save them from further degradation before it is too late,” Romshoo said.

Towns like Pahalgam, Sonamarg, Srinagar and Sopore – must-see places on the tourist map of the valley – owe their existence to water bodies. These include the Lidder River, the Hokarsar wetland, Dal Lake, Wullar Lake and the Manasbal Lake.  According to tourism department officials, over 10 lakh tourists visit these places annually and around three lakh people are directly and indirectly dependent on these tourist places for their livelihood.

The multimillion dollar handicrafts industry of Kashmir, which gives employment to over two lakh people, is also heavily dependent upon the arrival of tourists in the region. A study on the Impact of Tourism Industry on Economic Development of Jammu and Kashmir says that almost 50-60% of the total population of Jammu and Kashmir is directly or indirectly engaged in tourism-related activities. The industry contributes 15% to the state’s GDP.

Another big contribution of Kashmir’s water bodies to the state’s economy is the revenue generated through taxation of water usage for electricity generation by power development agencies like the National Hydroelectric Power Corporation.  According to Jammu and Kashmir’s Economic Survey of 2014, revenue of Rs 24.2 crore has been realised since 2010 on account of water usage charges on hydroelectric projects in the state.

It is estimated that over 1.5 lakh Kashmiris get direct and indirect employment from sand extraction and fishing. Figures available with the geology and mining department suggest that sand worth 15 crore is extracted each year from Kashmir’s water bodies, particularly from the Jhelum and its tributaries, through the organised sector. This does not take into account the fact that 40% of sand extraction – worth Rs 7.5 crore – is carried out illegally, an official said on condition of anonymity.

Fisheries is another big livelihood generation sector linked to the water bodies.  Masood Hussain Balkhi of Sher-e-Kashmir University of Agricultural Sciences and Technology said that aquatic resources of Jammu and Kashmir form about 16% of the total area of inland aquatic resources of India. Fisheries are an Rs 5.5 crore industry in Kashmir and employ over 90,000 people both directly and indirectly.

His colleague, Farooz Ahmad Bhat, added that annual fish production of the region is 20,000 tonnes. Fish diversity and production in Kashmir have shown a sharp decline over the past few decades and some local fish species had even become endangered and threatened. The ramagurun (Botia birdi), for instance, which was once abundant, has now almost disappeared as has the algaad (Schzothorax niger), Bhat said, blaming encroachment, pollution and siltation. 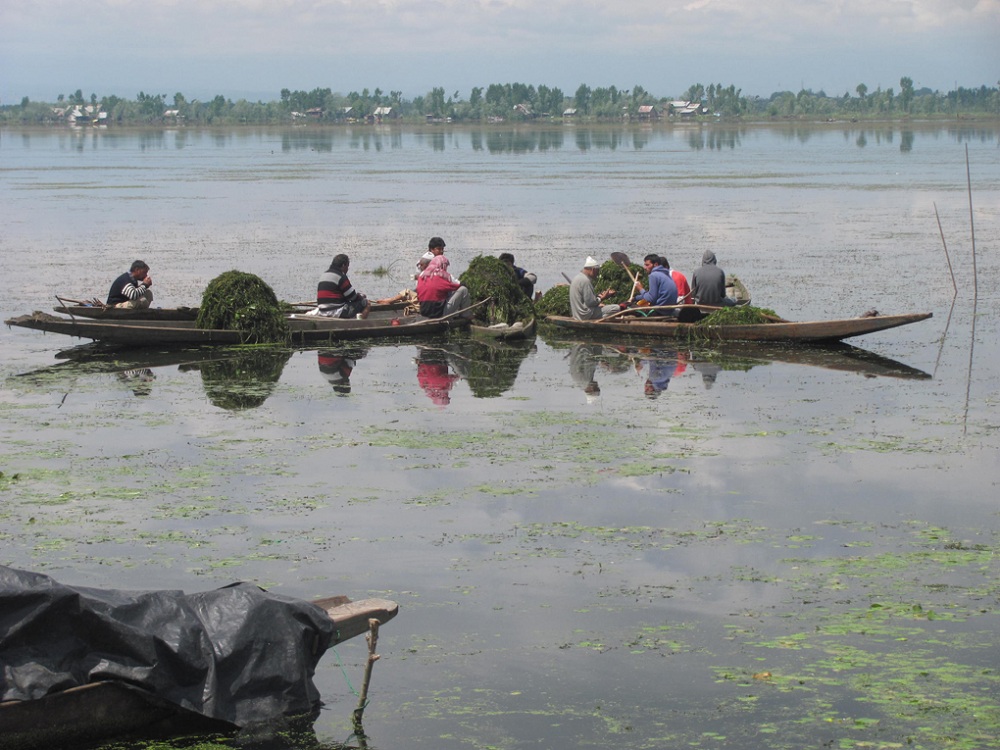 Massive vegetation growth in Dal Lake is one of the main obstacles in maintaining the glory of the lake. Rapid vegetation growth occurs due to fast accumulation of nutrients as untreated waste flows straight into Dal Lake and other water bodies of the region. (Image by Athar Parvaiz)

Having destroyed the water bodies, people have become vulnerable to exacerbated natural disasters like flooding. The September 2014 floods, the worst in Kashmir in six decades, inundated Srinagar and at least 50 villages and killed 200 people, apart from directly affecting 20 lakh people across the region.

“Kashmir Valley is essentially a flood plain of the river Jhelum and its tributaries, rivulets, streams and canals," Aijaz Hassan Ganie, a research fellow at the department of botany in Kashmir University, explained in an article in September that year. "All the valley lakes and the vast associated swamps played an important role in maintaining the uniformity of flows in the river Jhelum. In the past, during the peak summers, whenever the river would flow high, these lakes and swamps used to act as places for storage of excessive water and thereby prevented large areas of the valley from floods.”

While the impact of human activities and natural processes has already put Kashmir’s people in danger, the deterioration of water bodies will intensify further if required measures are not taken in time. Politicians such as Kashmir’s environment minister Bali Bhagat have acknowledged the problem. He said that his department “will definitely look into the causes of deterioration and start taking measures for conservation of water bodies accordingly”.

This article was originally published on thethirdpole.net.