Become a Member
Ad
Comprising maps, satellite photographs and pictures of specific parts of the river over solar cycles, Anthony Acciavatti’s 400-page The Ganges Water Machine shows a deep understanding of the river basin in its upper half. It is a strong critique of the narrow prism through which policymakers have viewed the river over a century and a half.

Anthony Acciavatti teaches urban design at the Graduate School of Architecture, Planning, and Preservation at Columbia University in New York City. He is also a founding partner of Somatic Collaborative and Manifest: A Journal of American Architecture and Urbanism.

Can you tell us what made you so interested in the Ganges that you devoted 10 years to this project?
It was a combination of factors actually. I had lived in New Orleans and Rome, two cities that are intimately connected to rivers, so I was interested in that relationship of cities and rivers. When I applied for a [J William] Fulbright fellowship I was constrained to applying to only one country. The Ganges is one of the few rivers that largely flows in one country. I also realised that it had not been mapped in 60 years. I was also fascinated by the fact that the Gangetic plain is one of the most densely populated and agriculturally productive regions on earth. I was curious to understand how this worked.

You have chosen a curious name for your book. Why Ganges Water Machine?
This was the name of a paper written in 1975 by Roger Revelle and V Lakshminarayana in Science, although they did not use the term in the rest of the paper. But they were basically visualising the river and the groundwater as one “machine”. The Ganges is one of the most engineered rivers in the world. Beginning from 1854, the work done on the river has been relentless. It has the longest canal system in the world, stretching upwards of 12,000 kilometres. By the 1870s, people were already referring to it as a system, like a steam engine. This has not changed post-independence. It is a hyper-inhabited region, and has millions of tubewells alongside it.

There is this belief that the river is eternal, never-changing, because of the sacred beliefs associated with it, but the reality is that it has changed massively over the last century and a half.

You mention 1854, and that brings us to the impact of the British in India. There is a section in your book titled Drain where you discuss this topic. Could you elaborate?
The chapter looks at how key Indian commentators showed how the British empire was an imperial drain on the Indian economy. One of the ways that this happened was because of the focus on railways rather than canals. In fact, as I write in my book, British liberals like the journalist William Digby showed how the focus on railways actually drove prices up during the famine of 1876-'77. Initially, the British government subsidised the canals, so that the makers made a 5% profit. Local labour and others also profited. The import of technology for railways changed all that. The canals were no longer subsidised, and local needs suffered.

Do you see the relevance of focusing on infrastructure today?
Yes, very much so. There is often this focus on large, engineering solutions that will use infrastructure to impose order on the landscape, and the people living there. This technology is often sourced from abroad and provides little financial benefit to the people living there. Moreover, large projects imposed from above often do not work in the way that they are intended to, or have other consequences if they do not align with local conditions. For example, the creation of long canals has also led to seepages, creating perfect breeding ground for disease-bearing mosquitoes. Many people do not see the Ganges as a flow of water, but only see the area that they are familiar with, which is part of their sacred geography.

How do you hope that your book will help?
This is an important moment when it comes to the Ganges. The World Bank has just extended a $1.5 billion loan to the Indian government to clean the Ganges. We can continue to work in a narrow manner, but it might be more useful if we look at the geography of the Ganges as a laminated geography.

Could you explain what you mean by that?
The landscape is not mono-functional. It is not merely about farming or shops. It is about both of these things, and more, but we treat them as separate. So a canal is built and agriculture will align along the canal, but shops will align along a major road, such as the Grand Trunk Road. We should be thinking of all that together, otherwise we will only be solving part of a problem, and possibly creating counter-productive results.

Will you remain engaged in this region?
I would like to. This began as a one-year Fulbright fellowship. I did not expect it to turn into a 10-year project. 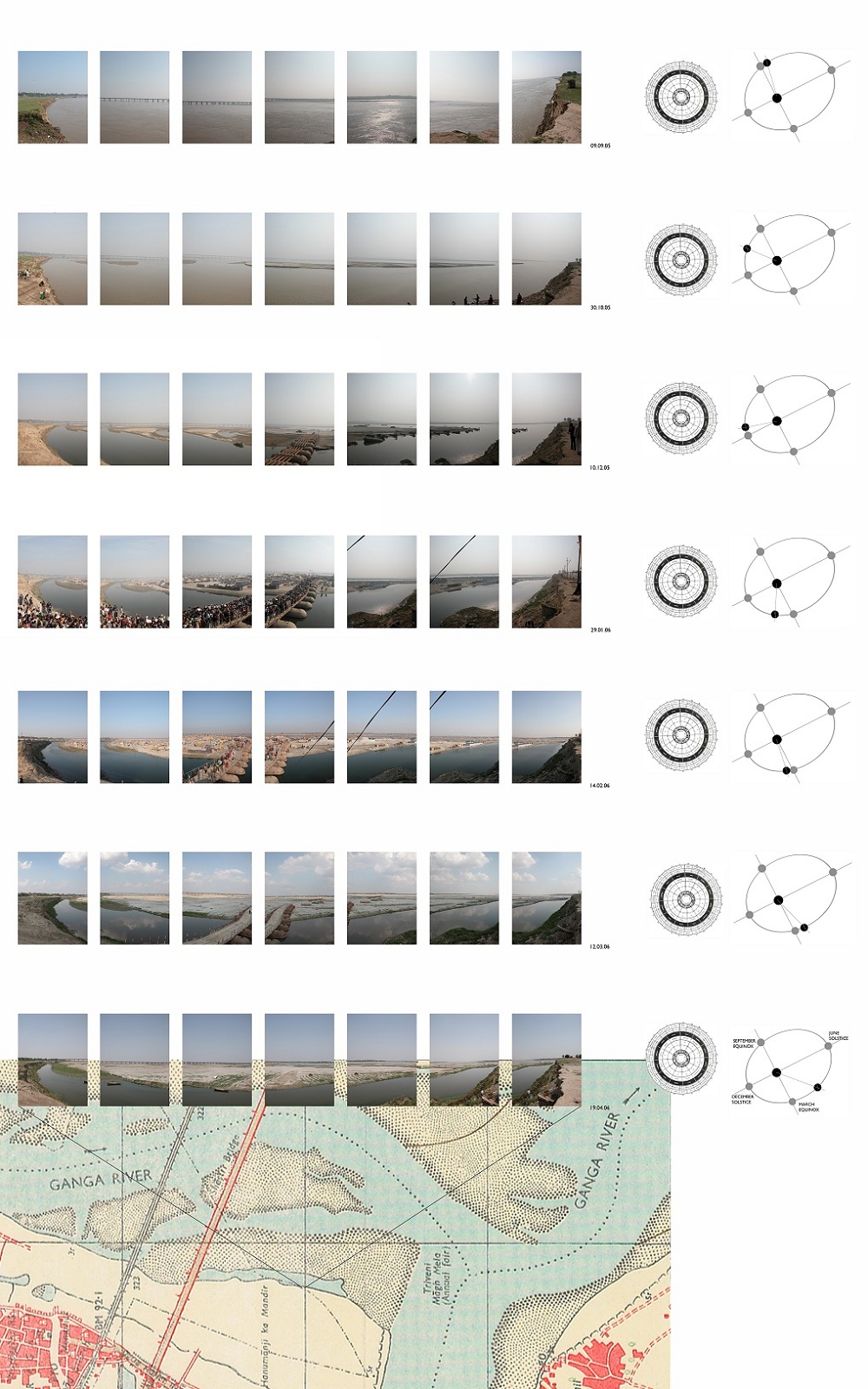 The Ganga at Sangam, Allahabad, over a year. (Image by Anthony Acciavatti)

This article was originally published on thethirdpole.net.