Contribute Subscribe
Ad
An inadequate police force is struggling to cope with a rising crime graph against Bihar’s vulnerable communities.

Yet, Bihar has one of the lowest crime rates against children in India at five per one lakh children, compared to the national average of 20.1, indicating that reporting may be rising but many crimes may still not be registered. 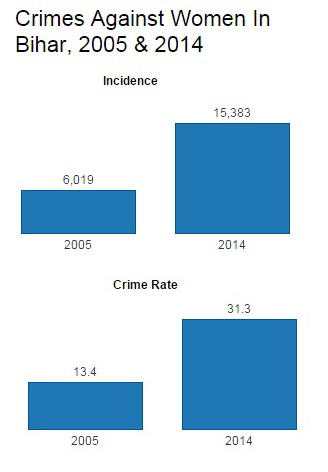 Bihar also has topped the crime rate in dowry deaths for 2014.

There has also been a four-fold increase in crimes against scheduled castes during the same period. The crime rate against SCs in Bihar is more than double the national average. Bihar reported one of the highest crime rates against SCs in 2014, only behind Goa, Rajasthan and Andhra Pradesh.

A number of these problems have to do with an understrength police force. The sanctioned civil police per lakh people in Bihar is 84.5, the second lowest among all the states. Only Odisha has a lower figure. The actual strength, however, is much lower at 54.8 per lakh people in Bihar, which is almost half of the national average of 109.35. 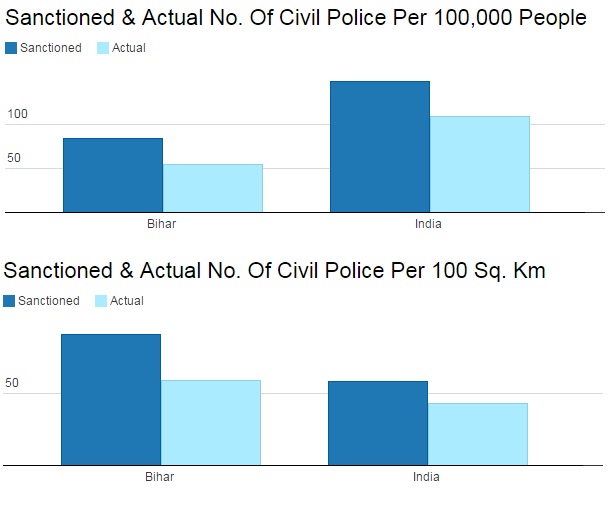 Bihar’s police force is also bottom heavy with a low teeth-to-tail ratio, which is the ratio of police officers from the rank of assistant sub-inspector and above to head constables and constables. Only Odisha and West Bengal have lower teeth-to tail ratios.

When it comes to representation of different communities within the police force, Bihar falls short in all categories. 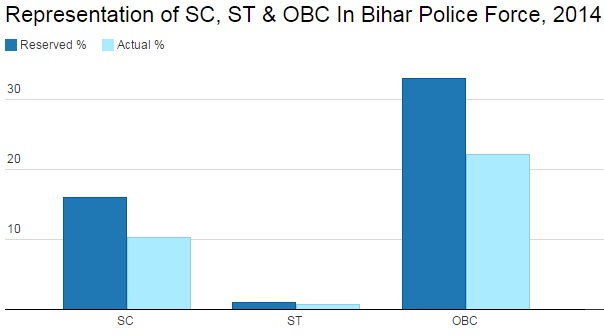 Source: Bureau of Police Research and Development; Note: Figures as on Jan 1, 2014

The percentage of SCs to the total police workforce is 10.3% compared to reservation provided of 16%. Only Chattisgarh, Haryana and Uttar Pradesh have a larger deviation between filled and reserved workforce personnel.

The percentage of other backward castes to total workforce is 22.1%, compared with a reservation of 33%. Goa, Gujarat, Haryana and Tamil Nadu are the only states that fare worse than Bihar in filling up reserved posts for OBCs.

There exists some bias in law and order cases since they are dependent on reporting. There can, however, be no doubt that the number of reported cases against vulnerable communities have gone up.

In just four years, crimes against women increased in Uttar Pradesh by over 66%