Contribute Now
Ad
In September last year, the BBC ran a word frequency analysis of Narendra Modi’s speeches, both as prime minister as well as a campaigner in the 2014 Lok Sabha elections. Pre-election, the most recurrent issues brought up by the prime minister were Gujarat, security, Congress, development, jobs, change, etc. After the election, issues such as foreign affairs, toilets, army, and the word “Modi” itself (the prime minister likes to refer to himself in the third person) dominated.

What was missing in both phases was the word "malnutrition".

It is difficult to overstate just how dire India’s nutrition problem is. In 2008, 43% of Indian children under the age of five were underweight. The corresponding figure for Somalia was 32% and for Rwanda it was 11%. Even Pakistan, seven decades after its simultaneous birth with India, has had greater success at this most basic of human rights – only 32% of Pakistan’s children are underweight.

In spite of the enormity of the problem, it does not figure in the Indian state’s priorities. In fact, it is not even a political issue. When India voted for the “Gujarat model” in 2014, there was much hype about roads, power and industry. What was overlooked was that Gujarat under Narendra Modi had a terrible record in preventing malnutrition. The percentage of underweight children is higher for Gujarat as compared to the all India figure. Interestingly, in a 2012 interview to the Wall Street Journal, Modi explained away these figures by citing Gujarat’s largely vegetarian population.

The year 2012 was, of course, a simpler time and blaming severe malnutrition on not eating meat was a comment mostly ignored. Today, it’s all quite different. Meat, especially in the form of beef, is a burning political issue. A sitting Bharatiya Janata Party chief minister, ML Khattar of Haryana, even linked Indian citizenship conditionally to not eating beef. The Indian state is now taking concrete steps to restrict access to beef. In the past decade, Bharatiya Janata Party governments in Maharashtra, Madhya Pradesh, Haryana and Gujarat (using a law passed when Modi was chief minister) have criminalised the eating of beef. While a number of states in India have had beef laws, the severity of these new laws passed by the BJP is unprecedented. In Maharashtra, for example, you don’t even need to slaughter a cow ­– you could be sent to jail simply for simply possessing beef.

Beef one of the cheapest protein sources

Not only then do Indian politicians not care about nutrition in India, they are actually bothered about banning nutritional foodstuffs. With beef, this is actually a major issue since cow meat is one of the cheapest ways Indians can get protein. 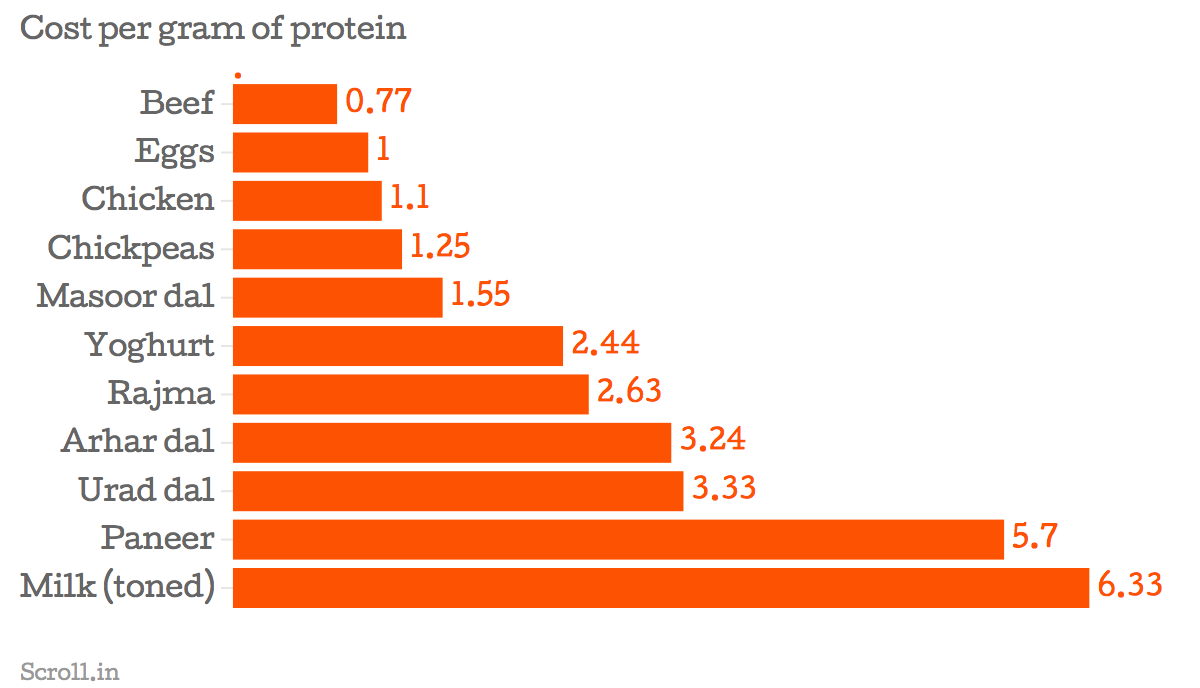 Cost in INR. Chart data from Calorie Count and survey of market prices in Kolkata in the third week of October.

Ironically, Modi knows this – remember, he blamed Gujarat’s terrible malnutrition figures on a vegetarian diet. Even so, he and his party went and banned the cheapest source of protein based on a religious taboo.

And it bears pointing out that beef is a mass food. Around 80 million Indians eat beef, a number which is larger than the population of France, Britain or Italy. Moreover, these beef eaters are some of the poorest, most socially disadvantaged people in the country, consisting mostly of Muslims and Dalits. To make things even worse, alternate sources of protein are simply getting too expensive for many of India’s poorest citizens. The prices of dal, a staple way to take in protein, have simply skyrocketed. As a final straw, many Indian states have also banned eggs from the midday meal, yet again denying Indian children crucial protein because of a religious decree.

In 2008, the Taliban tried to stop girls from going to school in Swat, Pakistan, a move that the now Nobel Laureate Malala Yousafzai resisted and got shot at for doing so. Comparing something to the Taliban is almost another version of Godwin’s Law and risks being dismissed as hyperbole. Nevertheless, it bears pointing out that if there’s one human right even more basic than education, it is food. If restricting education because of some atavistic religious law is wrong, so is restricting cheap sources of protein for the poorest of Indians.