Contribute Now
Ad
On Tuesday evening, the Delhi Police lathicharged on students who have been agitating outside the University Grants Commission office since last Wednesday to protest against the scrapping of so-called non-NET fellowships by the apex body.

These fellowships were allowed approximately  35,000 students to pursue their M.Phil and Ph.Ds programmes in central universities across the country. These fellowships, which are not based on the National Eligibility Test, the exam that qualifies candidates to be lecturers, give researchers Rs 5,000-Rs 8,000 each month with some contingency grants.

Even as the Ministry of Human Resources Development clarified that it will continue the fellowships and constitute a committee to decide the future of these grants, the students have been demanding that the fellowships be continued without any conditions and the stipends be linked to prevailing inflation rates.

The protesting students were lathicharged near the ITO Metro Station around 6 pm before an as-yet undetermined number were taken in vans to Kamla Market Police Station. According to students at the site, more than 100 policemen chased protesters in an operation that continued for at least 10 minutes.

Around 15 protesters have been severely injured and taken to the hospital, the students said. They alleged that the police beat up students in the bus that was transporting them to the station.

A photo journalist named Akhil Kumar was also reported to have been beaten up. He suffered injuries on his face and student activists reported that the police tried to snatch his camera.

Jawaharlal National University’s Student Union vice president Shehla Rashid was among those who were detained. Rashid condemned the crackdown, but said that the protesters will be back with “even larger number”.

“We condemn the brutal lathi-charge on students, especially women protestors who were occupying the ITO Metro Station gate,” she said. “It's shameful that the government and UGC are not hearing the genuine demands of students and turning an academic issue into a pitted battle between students and police. We will not let this action break our spirit. We appeal to students from all over the country to rush to Delhi and join the movement here. We will come in even larger numbers and reclaim our right to education.”

Here are some pictures of the crackdown. 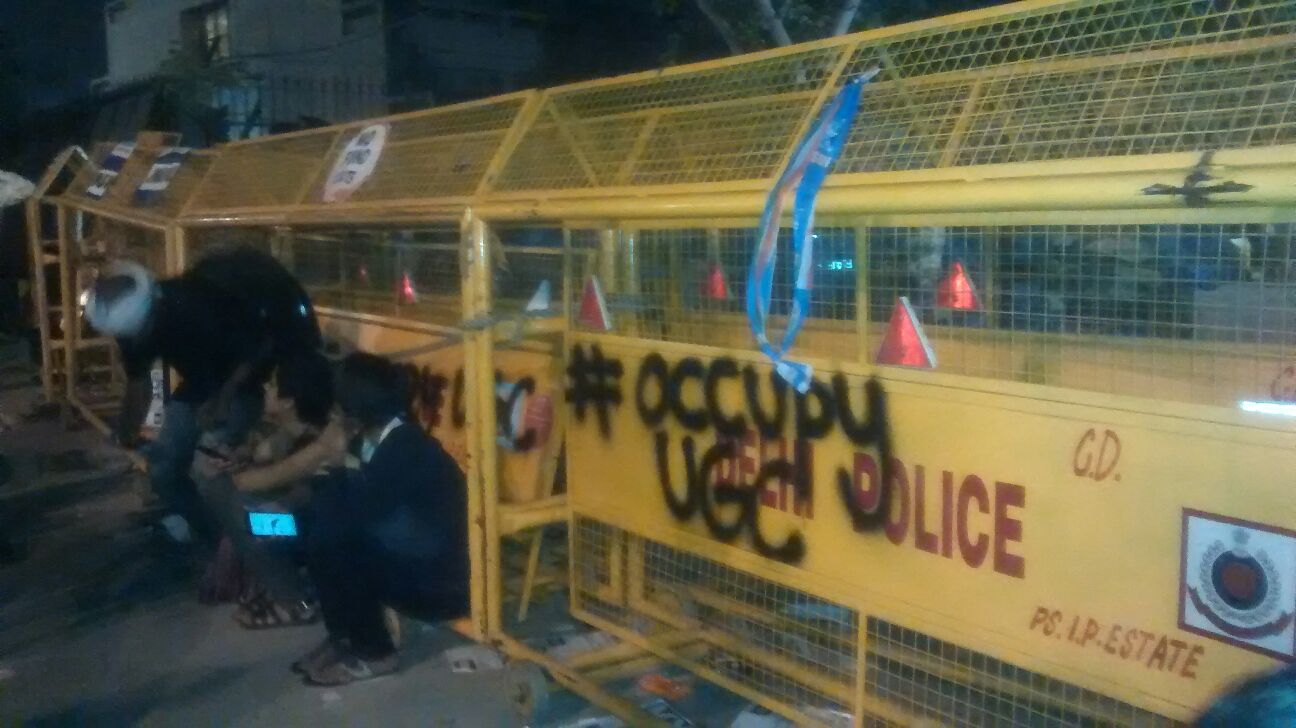 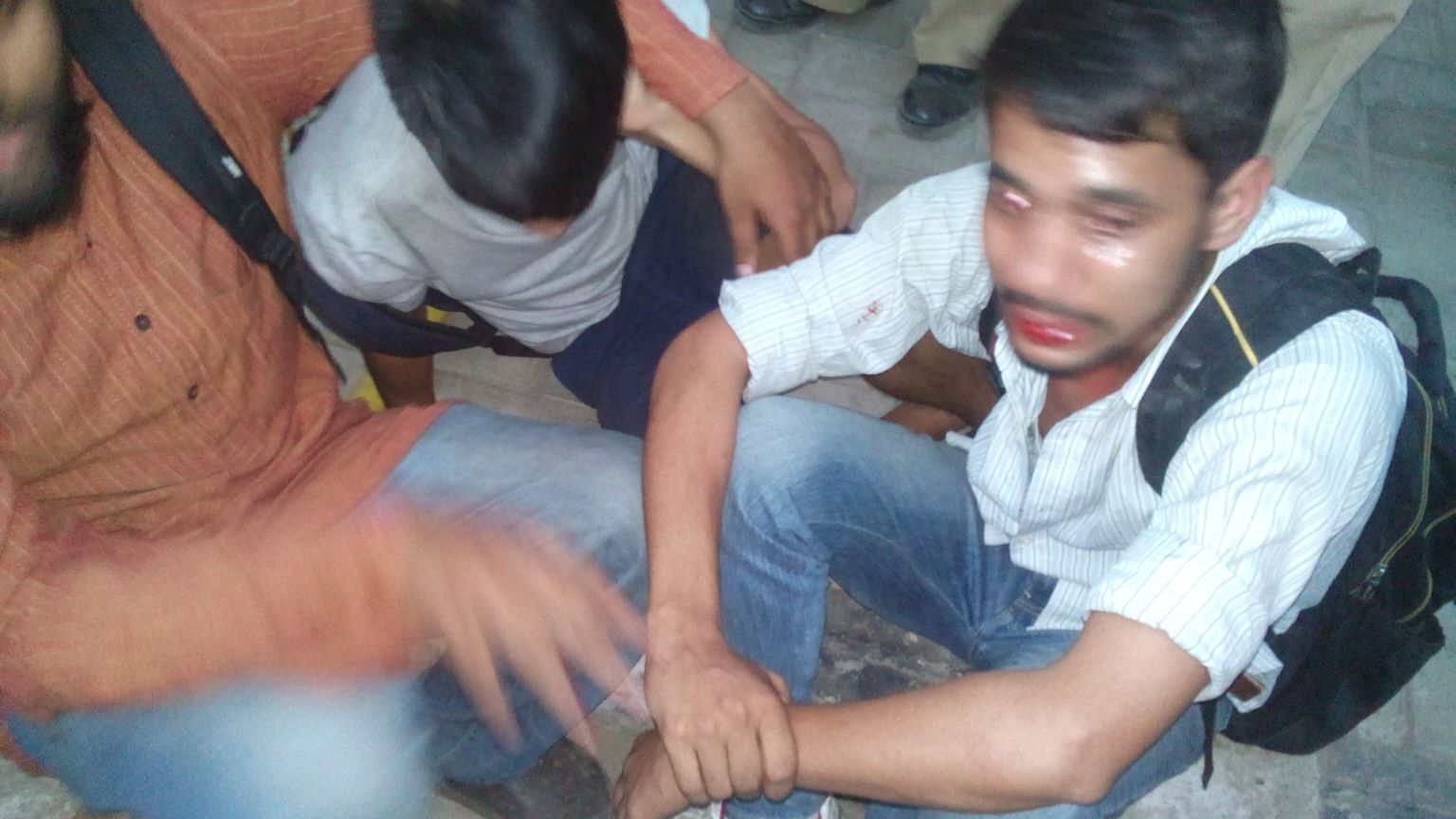 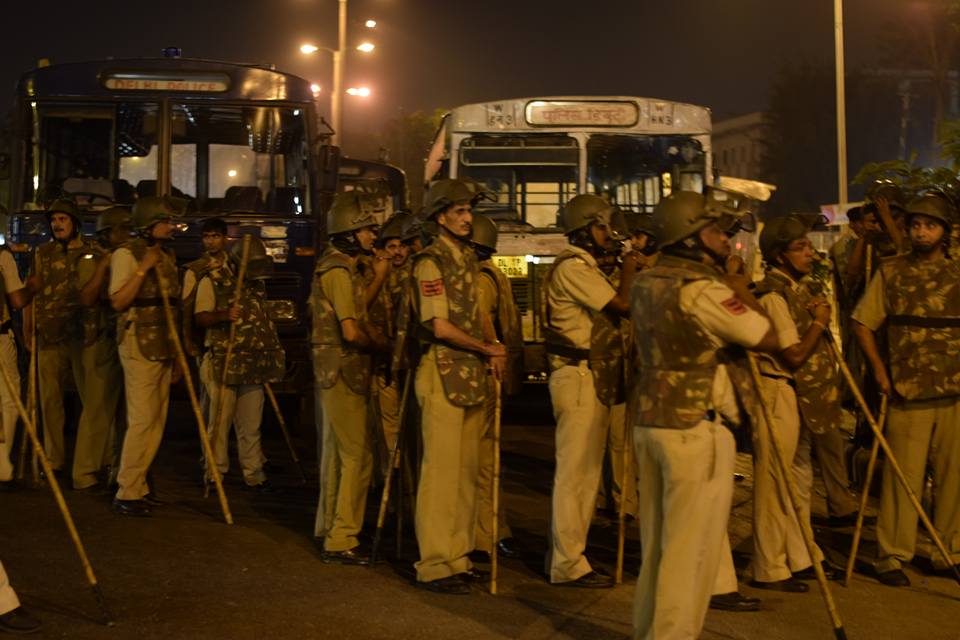 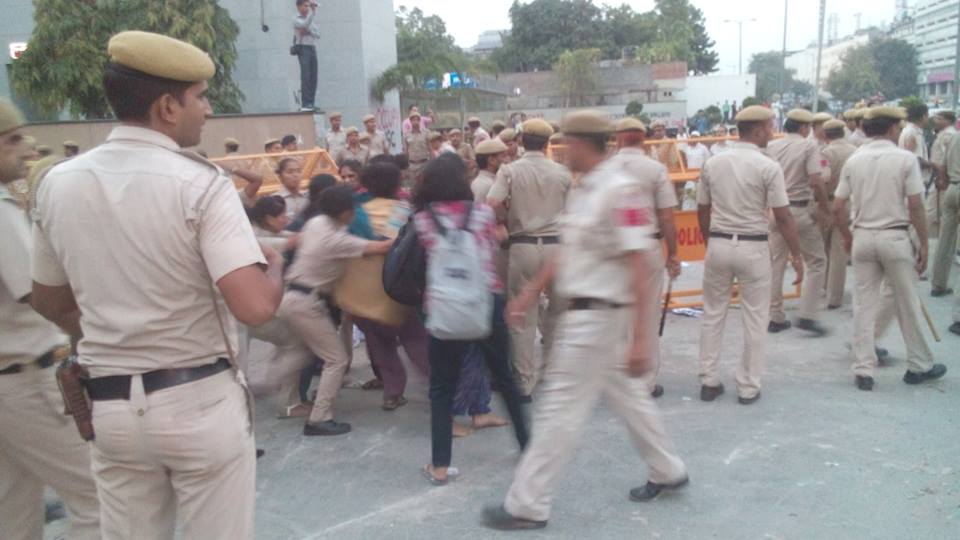 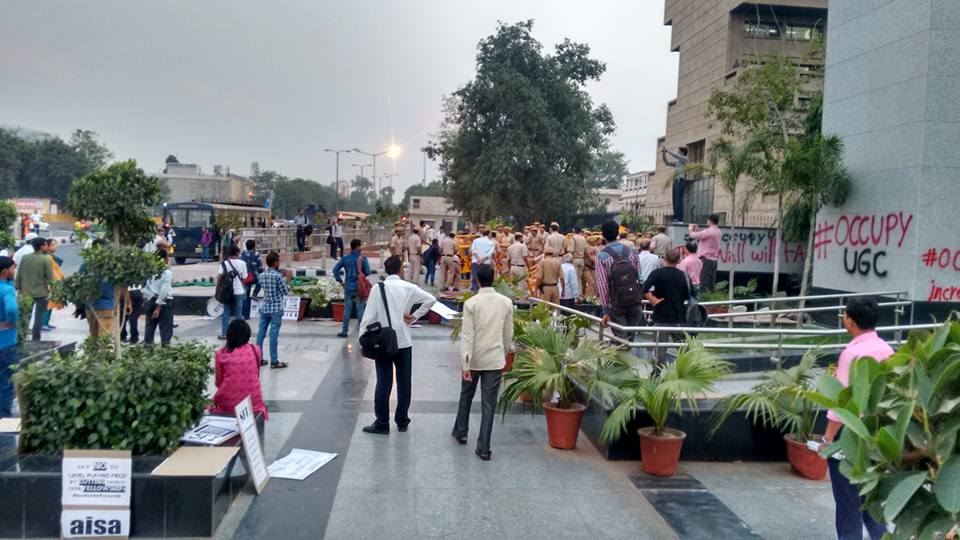 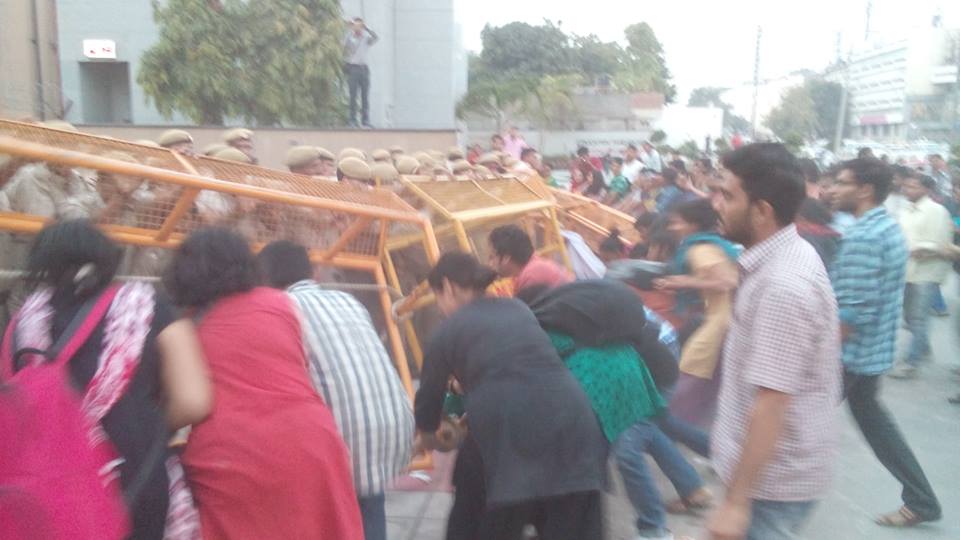 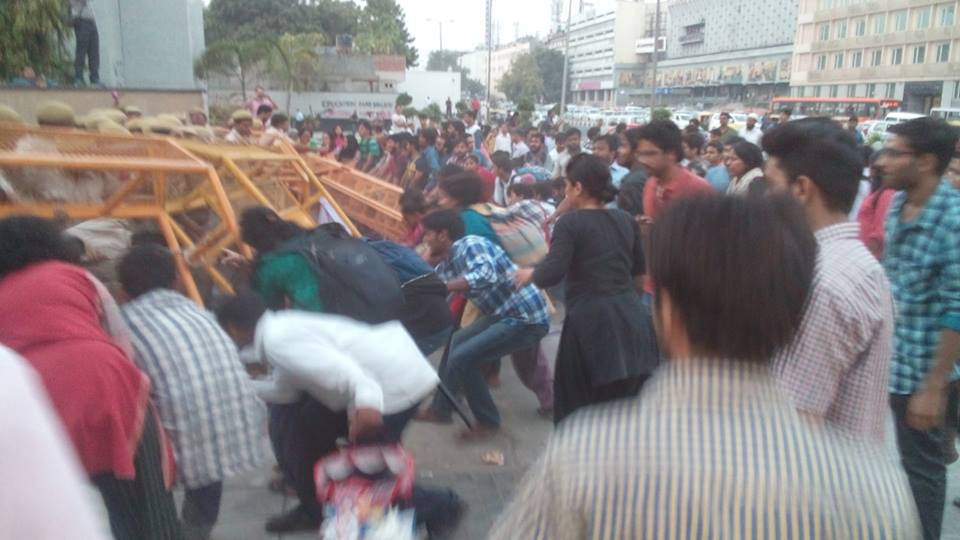 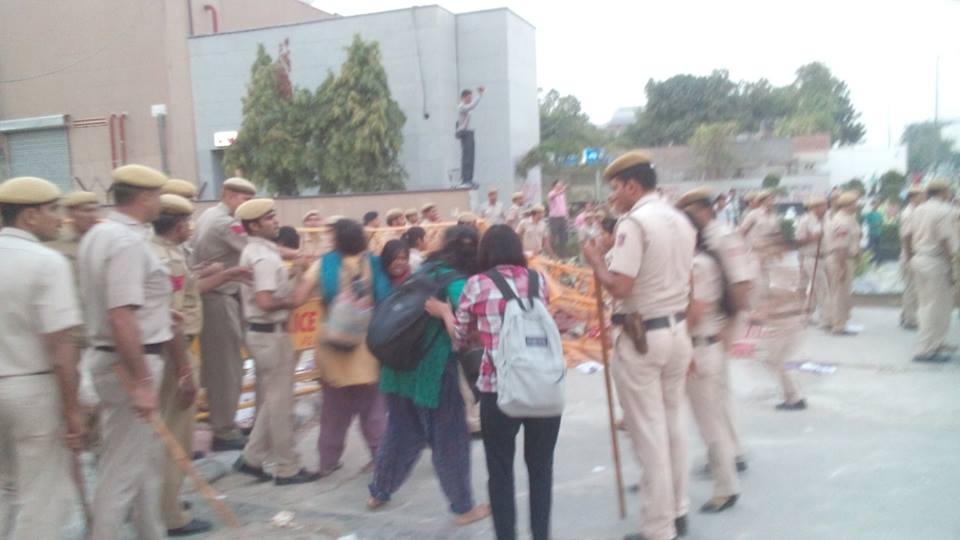 Late on Tuesday evening, about 30 teachers at Jawaharlal Nehru University and Delhi University issued a statement condemning the lathicharge. They said:

"As faculty and students who stand together with the students protesting the revocation/review of the UGC non-NET fellowship, we are outraged at the brutal police action against students gathered in a protest demonstration since yesterday, without a single convincing response from the UGC or the MHRD that could allay the anxieties of thousands of students across India that the non-NET fellowship will not be discontinued. Prevarication on this basic demand by press releases announcing the setting up of a review committee has only indicated a malafide intent.

We are deeply dismayed to hear of the reports of significant injuries to unarmed protestors and the detention of a number of students by the police. We demand the immediate release of all the detainees and the provision of medical aid. The MHRD Minister and the UGC Chairperson should understand that the situation can only be defused by their unequivocal assurance to the academic community that there shall be no rollback or any other amendment of the eligibility of students for the UGC Non-NET Fellowship scheme for the universities that are already in receipt of these fellowships in this or future academic years. Furthermore, it should take positive and visible steps to meet students demands for an enhancement of fellowship remuneration and undertake to extend this fellowship scheme to state universities as well."