Contribute Now
Ad
On October 27, six days after Durga Puja had ended, the English-language news channel NewsX ran what it called a “story about peace and bigotry”. Tweeting with the hashtag #DurgaPujaBan, the channel reported that in a remote Bengal village on the Jharkhand border, the Mamata Banerjee administration had refused permission for a Durga Pujo celebration because of pressure from the village’s Muslim residents.

The report was high-pitched and made no bones about its outrage. “Hindus abandoned by state government," screamed one headline even as the village of Kangla Pahadi was described as an “enclave of reverse bigotry where even prayers are termed provocation".

What the Dhimmis deserve: #DurgaPujaBan: Shocker from Bengal village. Ban on pretext of 'Communal Peace.' pic.twitter.com/dRiTn1G8VP

This was soon picked up by another national news channel, the Hindi-language Zee News and treated in an even more sensational manner. Zee News even brought up completely unsubstantiated reports of Durga Pujo pandals being set on fire and idols being broken in Murshidabad district.

The debates on both news channels drew comparison with Dadri and all the other numerous instances of majoritarian intolerance that the country has seen of late. It’s not a one-way street, was the narrative attempted: Kangla Pahadi apparently showed that so-called secularism and “Muslim appeasement” could be just as bad.

Are these allegations of Muslim appeasement correct? Does Kangla Pahadi prove that the Trinamool Congress had, in the words of the NewsX report, “abandoned” Hindus?

Kangla Pahadi is a remote village located in the Birbhum district of West Bengal. Situated on the Bengal-Jharkhand border, the village is severely underdeveloped. It has no metalled road leading up to it and most of the village consists of thatched mud huts, with only a few pukka buildings. Kangla contains 200 households, around half being adivasi. The rest are split almost equally between Hindus and Muslims.

In the Hindu quarter of the village, one thatched mud storeroom has an incomplete idol of Durga barricaded behind a bamboo screen. Facing this is a billboard, pitched into the ground, on which the faces of Atal Bihari Vajpayee, Narendra Modi and Anil Singh, the Bharatiya Janata Party representative for the administrative block, greet everyone for “Durga Pujo, Deepawali, Chhat Puja and Moharram”. The BJP is currently only a small force in the district, but is reported to be growing. 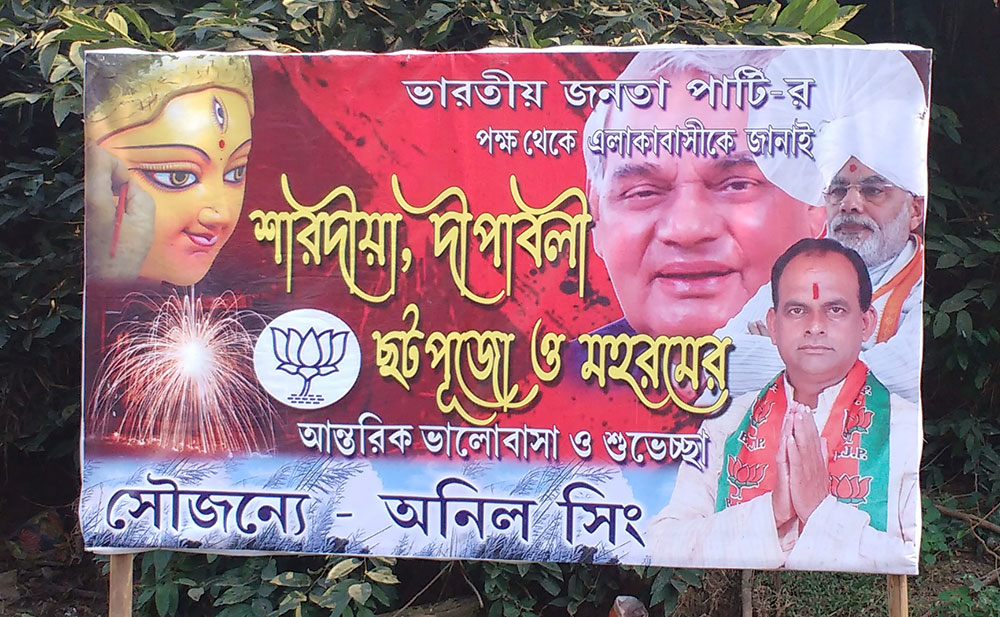 Chandan Shaw is a local BJP worker and the leader of the efforts to organise Durga Pujo in the village. “Historically, the village had no pujo since the residents were too poor to afford one,” Shaw explained. “We would go to the neighbouring villages to witness the celebrations. But in 2012, we managed to scrape together enough money for a pujo of our own."

Unfortunately, the administration never gave permission for the pujo in 2012. “And they've refused clearance for it every year since,” complained Shaw, pointing to the half-complete Durga idol.

“This is a blot on all Hindus,” Shaw said, shaking his head. “Hinduism is Hindustan’s religion and we can’t observe it here. It’s almost as if we’re in Pakistan."

Shaw alleged that the Muslims of the village were against them celebrating the pujo. “The administration has given in to their pressure,” he said.

The (missing) other side

The Muslim quarter of the village is 500 metres away. The Muslims agree with the version that Scroll had heard till now via news reports – they were opposed to the pujo. But they also added another crucial piece of information: not only Durga Pujo, the Eid sacrifice is banned in the village as well; and for much longer than the pujo.

In 2003, some local Hindus complained to the police about cow slaughter in the village during Bakr Eid. As a result, the police came in, made arrests and slapped a case on the people involved in the sacrifice. Since then, the administration has prohibited the Eid sacrifice in Kangla Pahadi. The officer-in-charge of Nalhati police station, Ashoke Sinhamahapatra, confirmed this. However, information about this ban was omitted by the news reports in Hindi and English.

#DurgaPujaBan in Birbhum doesn't surprise me. Bengal under Mamata going where even Left hadn't. Imagine outrage if Eid or X-mas was banned

“To conduct the sacrifice, we need to go all the way to the neighbouring village,” grumbled Feroze Sheikh, mirroring the Hindu complaint of having to travel to observe Durga Pujo. “Why should we do this? Why can’t we observe our festival here in our own home?”

"We have no issue if they celebrate Durga Pujo,” said Sheikh. “Our only argument is that they should let us do our qurbani too. That is only fair”.

Unlike many other states, cow slaughter is legal in West Bengal and this ban by the local administration on the Eid sacrifice has no basis in law.

The Block Development Officer of the region, Kinsuk Ray, attributes the Eid sacrifice ban to a vague directive from a Bengali minister in the Central government in the 1970s. He blames the 2012 pujo ban on villagers not following proper documentation when applying for permission.

His senior, the Sub-Divisional Officer, Supriya Das, unknowingly contradicted Ray and explained away the pujo ban by citing an executive order that barred any new public religious function in Bengal, be they pujos or Muharram processions. When Scroll asked to see the order, however, he was unable to produce it.

In just a week, a small, village-level problem had suddenly become a hot potato and the administration was clearly fumbling for a proper response. Until it became the focus of national attention, their handling of the situation consisted of banning both festivals in the village and hoping that they could force a settlement by negotiating with the villagers. “Dialogue is the only way,” said Das. “We must get both sides to compromise a bit and find a solution”.

This way of approaching the issue might be ham-handed and unprofessional, however, a charge of any sort of communal appeasement does not stick to the Bengal administration here.

Back in Kangla Pahadi, however, compromise seems tough. “We will not allow a pujo till we are allowed to do qurbani,” said Sheikh. Shaw, on the other hand, says that they will explore the option of going to court if permission for the 2016 pujo is not given soon. 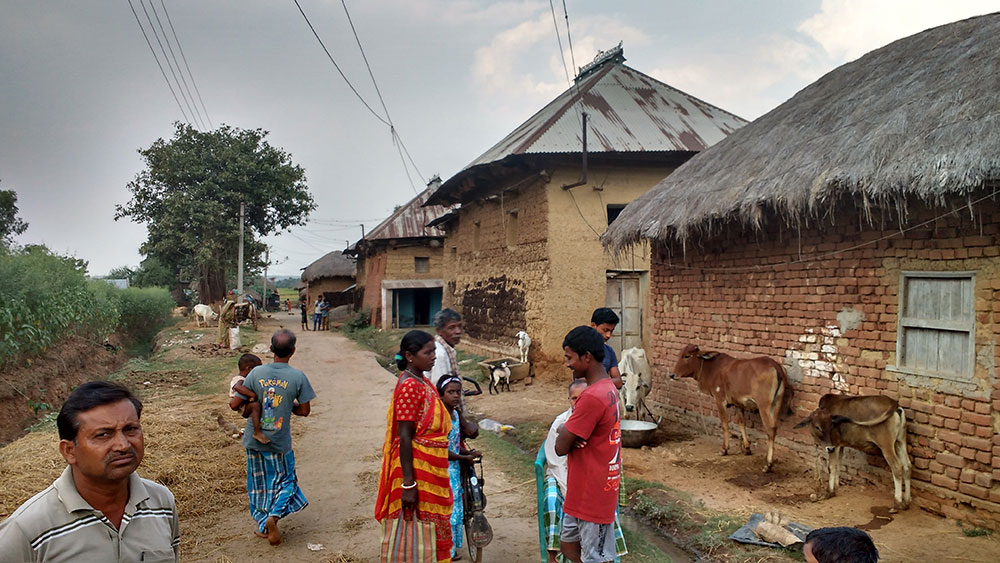 Why did the news break?

Dear @NewsX what is this #DurgaPujaBan nonsense? That too after even Lokkhi Pujo is over?

With the administration’s delicate balancing act of banning both festivals in disarray, the Sub-Divisional Officer, Supriya Das questioned the timing of media reports. “Why is this coming up now, so many days after Durga Pujo has got over?” he asked.

The NewsX story was based on the work of a local journalist, Ashish Mondal, who had written a report on the ban in a Bengali-language newspaper, Dainik Jugasankha, which is published out of Silchar, Assam. Mondal’s report, however, came out on August 31, almost two months before this broke on national media.

The TV reports seemed like the perfect counterbalance to voices decrying Hindutva-inspired intolerance around India. This counter narrative was strengthened by omitting any mention of the ban on the Bakr Eid sacrifice by the local administration. Had it been brought to light, the narrative of minority appeasement would have hardly stood the test.

Interestingly, when a major Bengali news channel picked up the report, they made sure to clearly mention both sides of the story – unlike the Hindi and English-language national media. ABP Ananda’s October 29 report on Kangla Pahadi begins with the line, “Since both sides are intransigent, just like Durga Pujo the Eid sacrifice is banned as well."