Nov 09, 2015 · 09:30 pm
Andrew Coates, The Conversation
“Mars ain’t the kind of place to raise your kids – in fact it’s cold as hell,” sings Elton John in Rocket Man. And it’s true: the present atmosphere and surface of Mars are certainly inhospitable for any aspiring rocket man. Since Mars lost its magnetic field 3.8 billion years ago, the pressure of its once Earth-like atmosphere has gradually reduced to just 1% of Earth’s, letting through damaging UV light and cosmic radiation that make the surface a lot less habitable.

We don’t really know how or why this happened. But new results from NASA’s MAVEN mission, published in the journal Science, have shed some light on the mystery. It’s to do with solar storms and shocks from the Sun billions of years ago. There’s a bright side to the new results as well: an aurora over most of the planet’s night-time hemisphere has been discovered.

The evolution of habitability

Life on Mars might have developed 3.8 billion years ago, at about the same time as it evolved on Earth. There is growing evidence from NASA and European Space Agency orbiters that virtually all the ingredients for life were present at that time – with water flowing on the surface, carving outflow channels and creating clays and other water-dependent minerals.

But something happened 3.8 billion years ago, probably a large collision with a planet-sized object, to snuff out Mars’ protective magnetic field, leaving only crustal magnetic anomalies mainly in the old southern highlands. These are the evidence of the ancient global magnetic field, which would have protected Mars’ atmosphere and surface from scavenging by the solar wind, as well as from energetic cosmic rays. 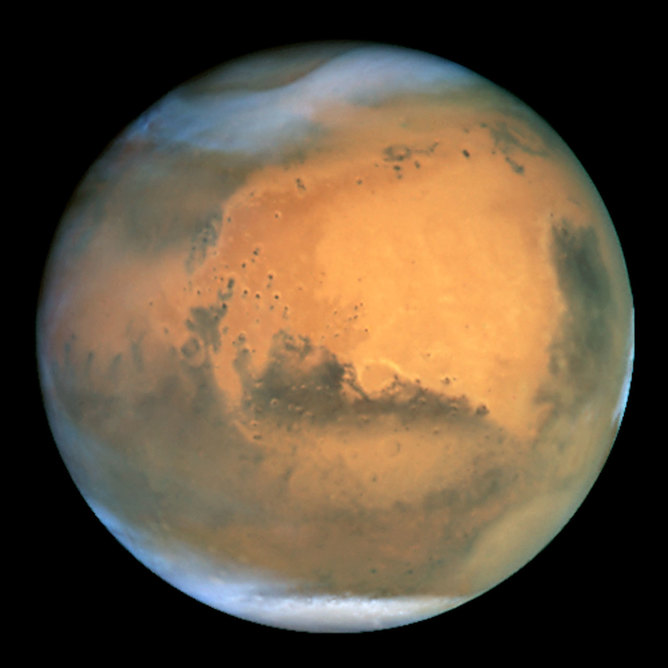 Mars as seen by Hubble.
Source: NASA and The Hubble Heritage Team/wikimedia

NASA’s MAVEN mission has been at Mars since September 2014, bristling with the instruments needed to study atmospheric escape, which is the loss of gases in the atmosphere to outer space. It is specifically looking at the effects of the solar wind – a gusty, million-tonne-per-second flow of charged particles from the Sun.

This is helping to reveal the fate of the early Martian water as well as other compounds in the atmosphere. One theory is that it flowed out to space over time, with the solar wind causing this flow to increase, and with some of the water being trapped in ice beneath the surface. The early sun was dimmer but more active, with more flares, coronal mass ejections and shocks to interact with anything in its way, including the early Mars.

The researchers studied the impact of a solar-wind shock which passed the planet on March 8, 2015 – one of the biggest ever seen at Mars. This increased the amount of gases flowing out from the planet by a factor of ten, supporting theories that solar-wind shocks caused enhanced escape while buffeting early Mars. The higher activity of the Sun billions of years ago means that a big chunk of its atmosphere would have escaped early on.

So did the loss of Mars' atmosphere wipe out any life that may have existed there? Not necessarily. Recent results from Mars show that salty water seeps on the surface now – but the harsh surface environment means that under the surface is the best place to look for signs of life.

The ExoMars 2018 mission will do just that, drilling two metres under the surface, enough to get below the radiation environment. This may be the haven for past or even present life (albeit less likely). We can’t wait to get our cameras and instruments to the surface in 2019 to test the sub-surface samples in this exciting ESA-Russia mission.

The MAVEN mission has also discovered a new type of aurora on Mars, similar to some of the ones we see on Earth. Northern Lights occur when the magnetic field of our planet is disturbed by the solar wind, making charged particles travel into the upper atmosphere where they “glow” as they lose their energy. The brightest auroras are called “discrete” auroras but there are also “diffuse auroras”, which glow faintly, if it all. 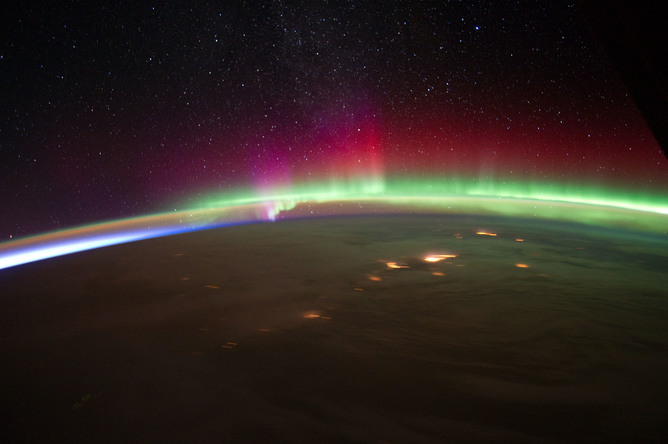 Mars Express has already discovered that Mars has a discrete aurora. But the new measurements have found that diffuse aurora also take place, away from the polar regions. It is likely that it is all over the planet at night. These aurora are caused by penetrating solar energetic particles hitting the atmosphere, rather than the solar wind. However, both types of auroras are seen in the ultraviolet, meaning they are outside the visible spectrum that can be detected by the human eye.

MAVEN has also made an unexpected discovery about all the dust surrounding Mars. Mars is a dusty planet, with seasonal global dust storms. However, the mission has spotted dust high in the atmosphere, meaning it is not from Mars but from interplanetary sources.

The results are exciting as it is taking us ever closer to tracing the history and fate of the Martian atmosphere. Combined with the results of other missions, this will help settle exactly how habitable Mars was in the past and how habitable it is today.