Contribute Now
Ad
Never before in the history of post-Independence India has anything like this ever happened, said Dr Prannoy Roy of NDTV this morning, covering the announcement that the Nitish Kumar-Lalu Prasad Yadav combine was leading in the Bihar assembly election results. But Roy's never-before comment didn't have anything to do with the achievement that Kumar and Yadav had pulled off. Instead, it had much more to do with NDTV's own response to the results.

That's because, not even an hour into counting of votes from electronic voting machines, NDTV said it had prepared a projection.

NDTV calls the election. BJP and allies all set to form the government in bihar with 145 to 149 seats #BiharBlockbuster

That's right, as early as 9 am, the channel known for straightforward, accurate election reporting called the Bihar assembly election in favour of the Bharatiya Janata Party. The network's Hindi channel, NDTV India,  even used the world "landslide" to describe the BJP's win.

An hour later, it was clear that NDTV had gotten it completely wrong.

It may not have been Dewey defeats Truman, but it was staggering not just how early the channel had been willing to call the election, but also how normal it seemed at the time when most other networks were also reporting BJP leads. The channel eventually realised its massive error, with Roy himself attempting to insist that "this is not our data," but that hour of news television will go down almost as a slice of alternative history in a world where the BJP did win.

NDTV panel seems to have descended from disbelief into hysteria… #BiharElections

That might have been a momentary lapse, with NDTV jumping the gun. But one of the reasons it might have been tempted to make the call would have been its own exit poll survey, conducted by Hansa Research, which predicted a BJP win.

As the results start to trickle in it has become clear that not only did NDTV make a bad call in attempting to declare the election by 9 am, but that its exit poll, touted as the most comprehensive with the largest sample size, was also completely off. This chart gives you an idea of just how wrong NDTV's morning call as well as most of the other polls were. 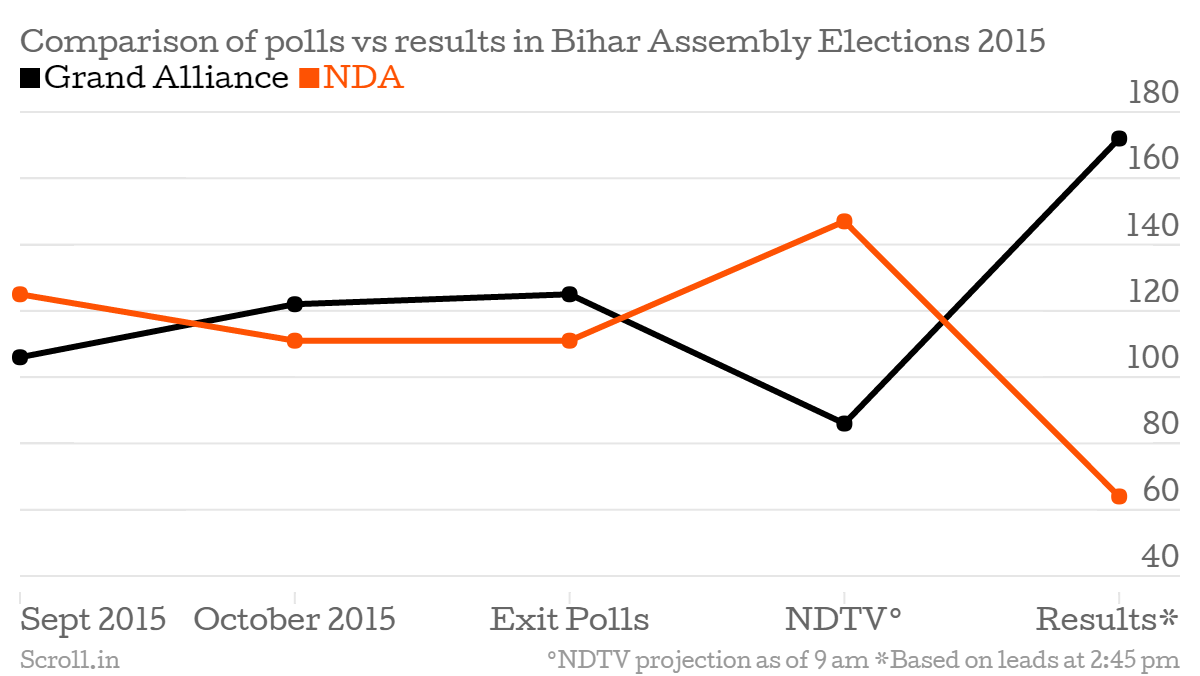 As of September, opinion polls believed the BJP was ahead. By October, the Grand Alliance had been given the edge, but not by much. Exit polls, which were made public after the final phase, also suggested effectively a dead heat. And NDTV's projection was a massive BJP victory. The results, as of Sunday afternoon, bore no resemblance to any of those projections.

This comes with two additional storylines that are both interesting in their own right. The first is of Today's Chanakya, the pollster that has received much in the way of credit for having predicted 2013's Delhi elections accurately and then following that up with an on-the-money prediction for the Lok Sabha elections in 2014. Despite a spotty track record since, Today's Chanakya is still closely watched, so it was a big surprise when it predicted a huge BJP victory, unlike the others which were predicting a neck-and-neck fight.

The other storyline is that of Axis APM. CNN-IBN reportedly refused to air the exit poll put together by Axis, despite advertising it as the most comprehensive one yet. Axis nevertheless put its numbers, predicting what seemed like an unlikely massive victory for the Grand Alliance, online.

The results make it evident that NDTV wasn't the only TV channel that made a terrible decision regarding Bihar election numbers, since the poll CNN-IBN did not air from Axis got it just about right. It also confirms Today's Chanakya's retreat into the overall pack of unreliable Indian pollsters, who have yet to prove that they can accurately estimate vote shares and turn those into seat numbers.

Bihar: What does an analysis of incumbents’ performances reflect about Election 2020?