Nov 09, 2015 · 11:38 am
Gilles Verniers
The organisation of elections in various phases provides the opportunity to study how parties fare throughout the campaign. This is especially relevant for the Bihar polls since the Bharatiya Janata Party changed gears several times in its electoral strategy and discourse, on the basis of their assessment of how they were performing throughout the elections.

It is also relevant to compare the performances of the BJP and other parties with the 2014 general elections. In order to make the comparison work, parliamentary results in 2014 have been broken down by Assembly segments, so that the results are in effect perfectly comparable.

The variable used for comparison is the strike rate of the main parties, that is to say the ratio of seats won against those contested. This makes more sense than compare vote shares between elections where parties did not contest the same number of seats.

The first observation one can make is the complete trend reversal between the two elections. Compared to 2014, the BJP’s strike rate has been cut by half, at 33.8% against 66.5%. Its partners’ strike rates have completely collapsed. 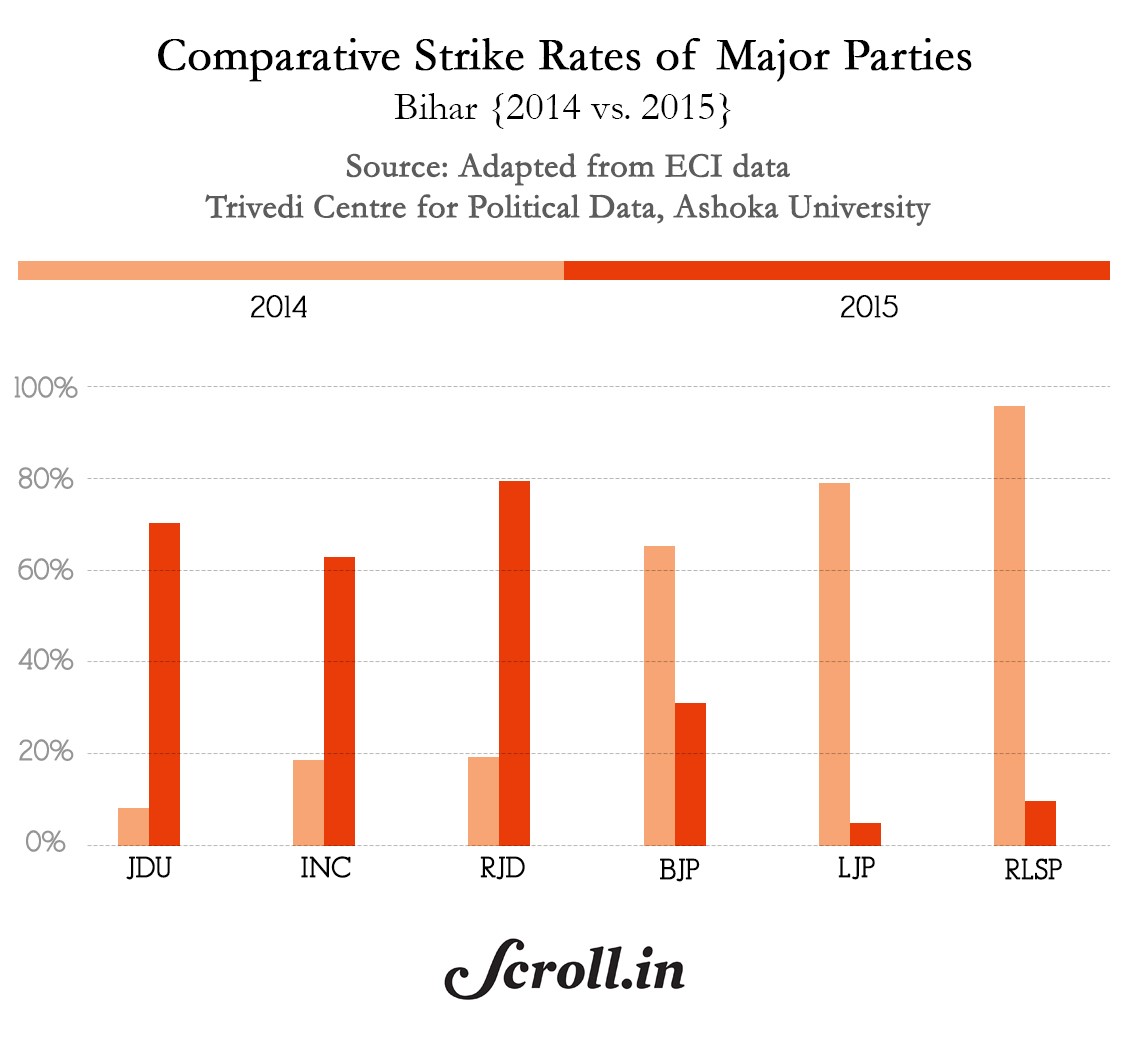 On the other hand, the Janata Dal (United) has multiplied its strike rate by ten, the Rashtriya Janata Dal by four, and the Congress by nearly the same amount. These are massive swings and a clear sign of a sweep far more important than their respective vote shares would suggest.

The similarity of performance of the three members of the Grand Alliance indicates that the transfers of votes between parties’ support bases worked well, and that voters voted either for Nitish Kumar or for the Alliance, or both, rather than for individual parties. The drubbing of the Hindustan Awam Morcha (Secular) and the Rashtriya Lok Samata Party indicate that, on the contrary, the vote transfers did not operate on the National Democratic Alliance side.

Although Congress may be excited about its performance (27 seats, best score since 1995), it should not presume too much from its sudden regain of popularity. The Congress’ figures are inflated due to the transfer of pro-Nitish votes and from the fact that a quarter of its candidates were imported from both the JD(U) and the RJD ranks. Besides, they contested largely in the two Muslim belts of Seemanchal and West Champaran, where NDA candidates hardly stood a chance.

If we break down the data by phases, we see that these performances were not uniform. The RJD started the first phases extremely well, sweeping nearly all the seats it contested in phases 1 and 2. It then gradually declined (relatively speaking) towards a 60% strike rate and had a last phase bump, in seats mostly dominated by Muslim voters.

The JD(U) also started very high but experienced a comparatively sharper decline, which they compensated for in the last phase, in which they nearly doubled their strike rate as compared to phase four.

The BJP had a disastrous beginning. It won only 12 seats out of 43 in the first two phases. It then stagnated over the next two phases and collapsed in phase 5. 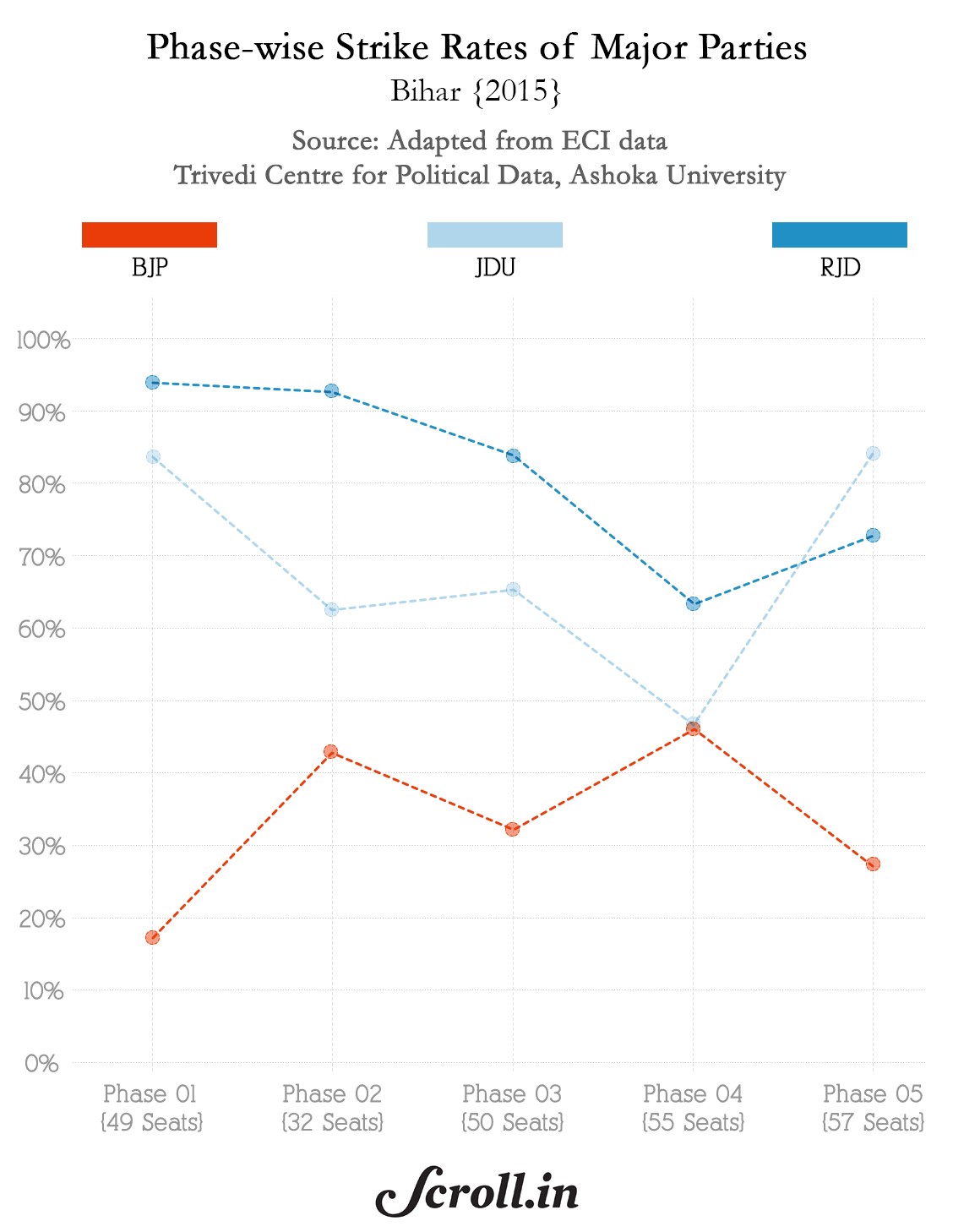 It may seem at first glance that the BJP did better in phase 4, but in order to state that, one should put the data in perspective with its performance in 2014. That comparison shows that the BJP actually suffered great losses in phase 4, which corresponds to some of its previous strongholds along the border with Uttar Pradesh. In 2014, the BJP swept 95% of the seats in that area. In 2015, it won 46.5% of the seats. 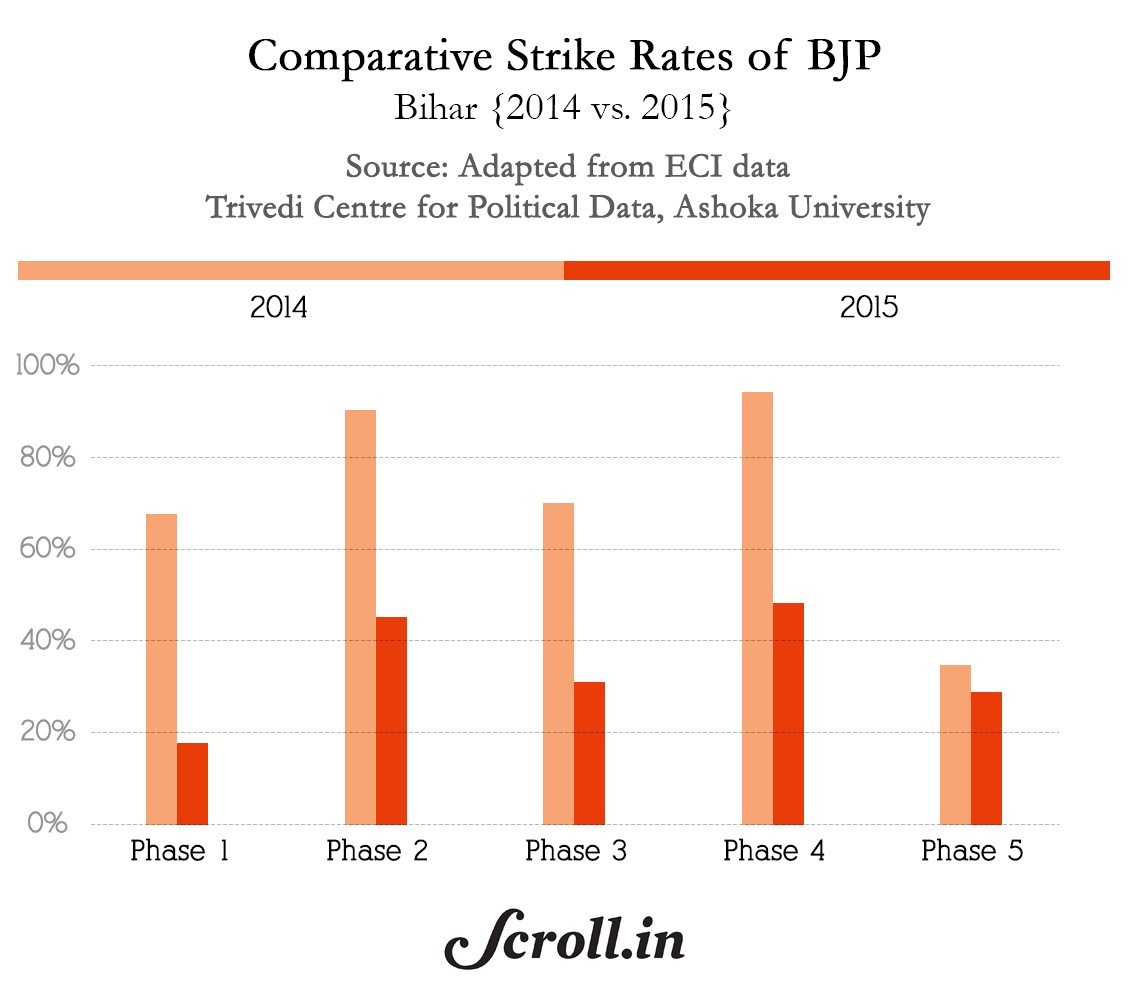 How do we read this data? On the one hand, different phases correspond to different regions, with specific demographics, political histories, levels of development, etc. Caste and religious demographics in particular vary quite considerably from one sub-region to another.

But on the other hand, these phases also correspond to various moments in a long campaign, in which the BJP displayed its nervousness by communalising the tone of the campaign before and during the last two phases. The cow advertisements, the poorly disguised attempt to polarise voters by agitating the baseless claim that Nitish Kumar and Lalu Prasad Yadav would give away OBC and Dalit reservations to the benefit of a “particular community”. In a state more divided by caste than by religion, that strategy backfired and Nitish Kumar in particular reaped the benefits.

These elements certainly do not sum up a long and complex campaign process but it does indicate that surfing on a hard line can have the effect of scaring floating voters away, a lesson the BJP is learning the hard way.

Gilles Verniers is Assistant Professor of Political Science at Ashoka University. He co-heads the Ashok Trivedi Centre for Political Data.
With data and content inputs from Neelanjan Sircar.

Prashant Kishor: The master strategist who kept the Mahagathbandhan on course