Contribute Now
Ad
The public may not have taken to the effort unreservedly, but local administrations certainly have. Across India, cities big and small are announcing car-free days to motivate commuters travelling long distances by car to switch to public transport. Delhi had one in early October, Hyderabad’s IT corridor has one every Thursday, and Gurgaon every Tuesday.

This proliferation kindles the hope that India may be waking up to the need to promote public transport. Recently released data from the 2011 Census shows that fewer than 15% Indians use public transport to work, while one in five walks to work every day. According to these figures, almost 30% people don’t have to travel to work at all.

Those who work from home are predominantly from rural areas, where homegrown enterprises dominate employment opportunities. In urban areas, people choose to walk to work because they either cannot afford automobiles or because public transport works only as a feeder service.

“In urban areas, a large number of people who walk to work are poor,” Shreya Gadepalli, Regional Director, Institute of Transportation and Development Policy told the Times of India. “They often walk long distances despite inconvenient and dangerous conditions because they cannot afford any other form of transport.”

About 15% Indians have to travel more than 10 kilometres every day to work, as per the Census data. For another 22%, the daily distance to travel is 2-5 kilometres.

“In Chennai, for example, there are several modes of transport,” KP Subramanian, a former urban engineering professor at Anna University, told the Times of India. “Within railways, we have suburban, Mass Rapid Transit System and Metro Rail. But there is no integration. Once the integration happens, more people will prefer to take public transport like buses or trains.”

Another interesting insight from the data is that less than 3% of the Indian workforce use cars, jeeps or vans for the daily commute. 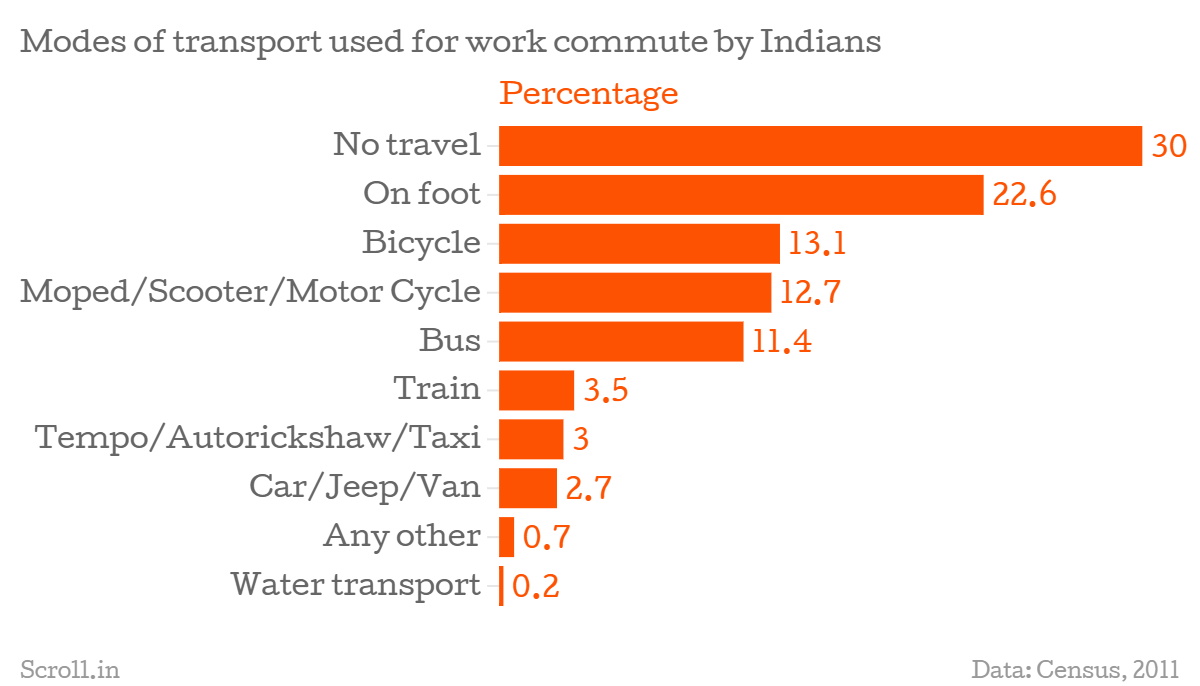 Bicycles emerged as the second most popular mode of transport, with 13% people cycling to their place of work every day. Another 12% use mopeds or motorcycles. While one in 10 Indians takes a bus to work, just 0.2% (or 5 lakh people) use water transport to commute.