Contribute Now
Ad
Chennai is locked in an inextricable battle with water. In the brutal summers, the city can’t get enough of it. And when it rains, the coastal metropolis of over four million people often finds itself inundated by too much of it.

The rains this year have been particularly deadly. At least 79 people have died across Tamil Nadu because of heavy rains. Wide swathes of Chennai are under water, and the army and the air force have been called in to rescue marooned residents.

None of this is entirely unexpected. For decades now, floods have ravaged the city: From the six-day-long downpour that submerged Chennai in 1943 to the more recent floods in 2005, 2010, 2013 and now this year.

Some of it is entirely the fault of the city’s administration – rapid urbanisation, destruction of critical wetlands, inadequate infrastructure and the likes. But much of it is also the consequence of Chennai’s geography: The city is spread across a low-lying area and is flat like a pancake. The average elevation of the city is only about 6.7 metres above mean sea level, with many neighbourhoods actually at sea level, which makes drainage a challenge even under normal circumstances.

Rivers and a marsh

Still, the city had some natural features that helped getting the water out when the heavens opened. Apart from the Cooum and Adayar rivers, Chennai’s periphery once hosted a massive wetland, which provided a natural flood control barrier in the past.

The Cooum has now been reduced to a massive, stinking sewer (pdf) that snakes through the heart of the city, heaped with the waste generated by a heaving metropolis. Similarly, rampant encroachment and urbanisation in its upstream reaches has sapped the ability (pdf) of the Adayar river to carry flood water. Another key waterway, the Buckingham Canal, is also choked with silt and sewage. So, when Chennai floods, there aren’t enough unobstructed channels for the water to get out.

And a rapidly expanding city has decimated the critical Pallikaranai marsh, which acted as a natural flood sink when the rains overwhelmed Chennai. “The marsh that was till about 30 years ago spread over an area of more than 5000 ha (hectares) has been reduced to around one-tenth of its original extent due to anthropogenic [manmade] pressures,” a 2007 study (pdf) by a group of German and Indian scientists noted. "The free flow of water within the entire marsh has been totally disrupted due to mega construction activities and consequent road laying."

This appropriation of the wetlands and detonation of its rivers is a direct consequence of Chennai’s explosive population growth in the last few decades. 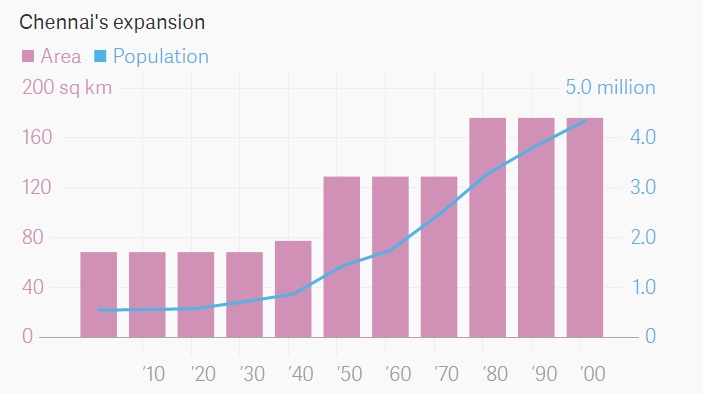 But it’s not just key water bodies of the city that have struggled to cope. Even its sewage infrastructure has been rendered inadequate.

Chennai’s first sewage plan was conceived in the 1860s and a proper system was installed (pdf) in 1891. Improved and expanded since, including a zonal reorganisation in the 1960s, it hasn’t been able to keep up. There simply aren’t enough sewage lines and pumps to deal with Chennai’s population and flat terrain.

“The sewage system in Chennai was originally designed for a population of 0.65 million at 114 litres per capita per day of water supply; it was further modified during 1989-1991, but is now much below the required capacity,” a 2011 study (pdf) by members of the National Institute of Disaster Management noted. “The city has only 855 km of storm drains against 2,847 km of urban roads.”

It hasn’t helped that the city’s network of about 650 water bodies – including big lakes, ponds and storage tanks – has been destroyed. The current number stands at around 27, according to the disaster management institute study. Even those water bodies that have managed to survive are much smaller than before. For instance, the total area of 19 major lakes in the city has nearly halved from 1,130 hectares to about 645 hectares. This has meant that the overall capacity of water bodies in the city to contain excess rain water has reduced. 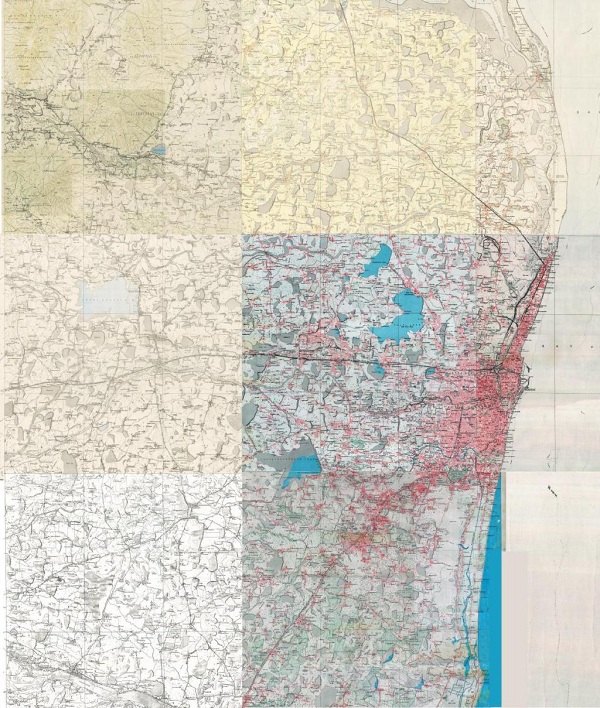 This is a 65-year old map that shows the locations of several water bodies. The gray areas of the map represent eris, or small ponds. The gray water bodies are seasonal, in that they appear during the rainy seasons and remain dry during the rest of the year. Comparison of this map with a more recent map will show that several of these water bodies have shrunk and several have completely disappeared.
Source: Transparent Chennai

Chennai’s land use pattern has also altered, with some areas where “almost 99% of the green cover has been replaced by non-vegetative development,” the disaster management institute study reported. “As a result, the water-holding capacity of the city’s surface has gone down drastically,” the study added. Together with an increase in impermeable surfaces such as paved roads and other construction, the peak flow – or, the maximum instantaneous discharge of water – in some areas has increased by 89% between 1997 and 2001.

The government has already spent large sums of money to clear up Chennai’s rivers and resuscitate its sewage infrastructure . In 2009, for instance, the central government allocated Rs 633 crore under the Jawaharlal Nehru National Urban Renewal Mission for Chennai to get its drains in shape. By 2014, about Rs 394 crore of that amount had been spent by the Tamil Nadu government but, as the Comptroller and Auditor General noted, it hadn’t done much to protect Chennai from flooding. Evidently, good money has been spent down the drain.