Nov 20, 2015 · 01:30 pm
Nandini Ramnath
The Central Board of Film Certification has been living up to its reputation as the moral guardian of the nation. In recent months, the CBFC has bleeped out swear words from several Hindi and English movies, ordered vast cuts to the adult-rated sex comedy Mastizaade, made three unnecessary cuts to the squeaky clean Prem Ratan Dhan Payo, reportedly asked for a kiss between Deepika Padukone and Ranbir Kapoor in the upcoming Tamasha to be severely curtailed, and most recently trimmed two liplocks in the new James Bond adventure Spectre.

To be precise, each of the minute-long Bond kisses has been trimmed by 50%. 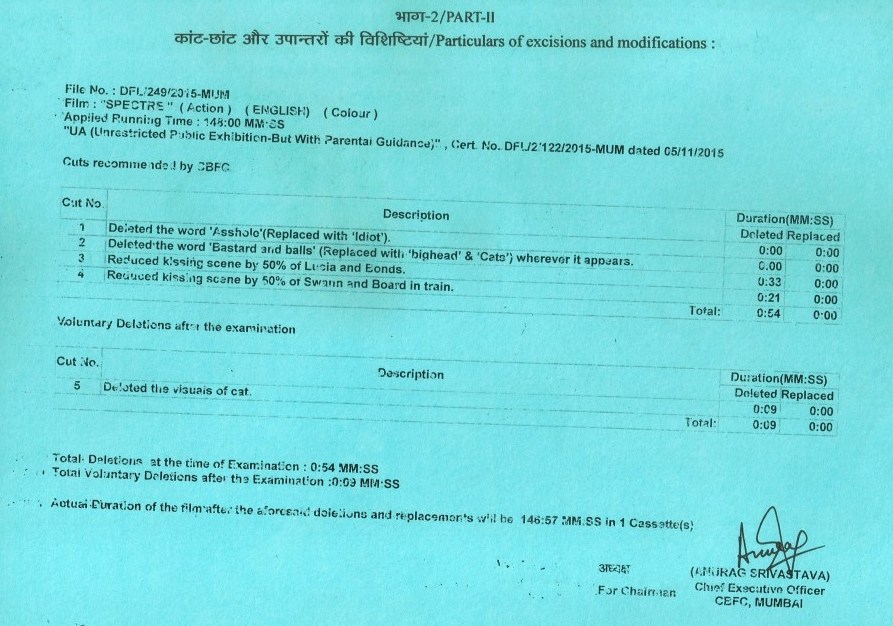 Bond is one of cinema’s most cherished Lotharios. Gender relations have changed in Hollywood and elsewhere, often for the better, but Bond retains the license to move on any woman who catches his fancy. The encounter inevitably proves irresistible to his partners and has always been depicted tastefully. There is a smooch, followed by scenes of Bond bare-chested in bed while his conquest smiles beatifically, her modesty protected by silken sheets. Indian censors have traditionally balked at the unbearable amount of time that Westerners devote to kissing, and have taken pride in their ability to judge exactly how many seconds of snogging are acceptable for the subcontinental viewing public. If Bond wants to kiss for more than 30 seconds, that is really his problem.

The CBFC’s vigilance against kissing and love-making is hardly new, but its tendency to infantilise audiences has scaled new heights ever since Hindi film producer and distributor Pahlaj Nihalani was named its chairperson in January. Nihalani's appointment came months after he produced an election video for Prime Minister Narendra Modi, titled Har Har Modi. Since then, Nihalani has not attempted to hide his adoration for the man he calls his “action hero”. Earlier this month, multiplex chains, as well as producer and distributor Rajshri Films, were persuaded to screen Nihalani’s second video tribute to Modi, titled Mera Desh Hai Mahaan, Mera Desh Hai Jawan,  at shows of the Salman Khan-starrer Prem Ratan Dhan Payo.

Nihalani has also declared his intention to make a film to portray the students of the Film and Television Institute of India as anti-nationals”.  He is evidently irked by their high-profile protest against the appointment of no-name actor Gajendra Chauhan as the school's head. The students boycotted classes for 139 days, returning only on October 28.

Members of the film industry are seething in private at Nihalani’s overreach. However, public efforts to influence the Information and Broadcasting Ministry, which is headed by Arun Jaitley but run by Minister of State Rajyavardhan Rathore, have come a cropper. Bollywood’s most powerful filmmakers  held a meeting with Rathore in March, aimed at persuading the ministry to clip Nihalani’s wings. It resulted in nothing more than a few media stories. Rathore promised to study the industry’s grievances, but in the months since then, the chairperson’s position has only been strengthened.

Members of the CBFC board have been grumbling off the record about being routinely sidelined as Nihalani takes unilateral decisions that influence the way we watch movies. Contrary to promises Rathore made at his meeting in Mumbai, bleeping out swear words in films has become the norm. Films with adult certification can no longer advance the argument that their films should be passed without cuts since they are intended for grown people who are allowed by law to vote and marry. This has the desired effect of keeping producers on the edge – they can never be sure what might upset the CBFC. The temptation of self-censorship is strong.

Nihalani’s gumption has grown in direct proportion to the outrage against him. It is unlikely that the prime minister and his inner circle will rein in such an enthusiastic supporter, especially since Modi’s public image has suffered several recent blows. The Information and Broadcasting Ministry’s controversial decision to appoint Chauhan as head of the prestigious FTII and pack its governing council with Rashtriya Swayamsewak Sangh members, at least one of whom has publicly attacked documentary screenings at the institution in the past, indicates the Centre’s cavalier attitude to the arts.

Going to the movies has become a tedious exercise of late. Tickets are expensive, the cola and popcorn are overpriced. The intrusive health advisory against smoking is yet another instance of how the government does not trust the intelligence of cinemagoers or the general intent of filmmakers. The diktat that the national anthem be played before every screening in Maharashtra is a heavy-handed attempt to induce patriotism in a space designated for pleasure and relaxation. Movies are being bowdlerised without rhyme or reason, and paying audiences are being denied the opportunity to experience a film in the way its maker intended.

This is the Age of Pahlaj, and we have no choice but to suffer through it.

India’s Daughter, the act of documentary and our obsession with true crime