Contribute Now
Ad
Students at Lucknow’s Ram Manohar Lohia National Law University are agitating for more liberal hostel rules for women, even as two students were sent expulsion letters on Monday for violating their curfew timings.  The protestors say that security concerns are used as an excuse to harass women students and limit their movements.

On Wednesday night, protesting women students were joined by their male counterparts in a march to Vice Chancellor Gurdip Singh’s home. Singh assured them that their grievances would be heard in full and action will be taken.

The agitation started on Monday, the day after a fifth-year law student, whose name has been withheld at the request of her classmates,  broke her arm in an accident.  As they searched in vain for first aid facilities, the students took a while to return to the hostel. Though the the curfew timing is usually 10.30 pm, the warden on duty said that the entry was  only being permitted until 9.30 pm.

The students claim they were made to write letters of apology and plead with many officials before they were  allowed in.

“In the middle of our exams, they changed the entry timings of the hostel to 9.30 pm arbitrarily without informing everyone and we were shocked to see such apathy from the warden that they didn’t let an injured person go to her room,” said a student familiar with the matter. “We were made to sit outside till 10.40 pm just so that we would miss dinner, which is taken off the mess by 10 pm. It’s common for the hostel authorities to target us.”

Students who spoke to Scroll on condition of anonymity said that the injured student has since been admitted to a hospital, where doctors have claimed that her injury had been aggravated by the delay in giving her first aid.

Despite this, the student and one of her friends on Monday received a notice from the authorities asking them to explain why they shouldn’t be expelled from the hostel. This sparked anger across the campus. Male students and some teachers also stood up in support.

The students were also irked by the fact that the two students were given only ten minutes notice to appear at a hearing to explain why they should not be expelled. In addition, the wardens at the hearing continued to make sexist remarks, the students claimed.

The warden "kept saying that this [the hostel rules] is of no concern to her and tried to send us back from there,” a student said. “She then went on to say that you as a gender are victims of nature and need to be put inside.”

Over the last six months, many institutions around the country have witnessed protests from women demanding that they should be allowed the same hostel privileges as men. The protests started from Delhi's Jamia Milia Islamia university in August. They quickly spread to other campuses as well under the banner of Pinjra Tod, a Facebook page-led movement that collects accounts of negative hostel experiences and gives students a platform to speak up anonymously.

Students from National Law University used the page to list their grievances and to announce their protests.

The rules for women on campus are quite arbitrary, the students claim. They point out that though the library is open until 10 pm, the women's hostel shuts its gates at 9.30 pm. Spending half an hour in the library involves writing an application to the authorities.

Annoyed by the university’s refusal to respond to their concerns, the students on Tuesday decided to launch peaceful protests through the night by sitting outside the hostel. They say they will continue to do so until the authorities listen to their demands.

The students are demanding the revocation of the expulsion notices, that library and hostel timings to be extended until midnight and that the wardens on duty that night be sacked for their “apathy and insensitive comments.”

Here are a some pictures from the ongoing protests shared by students. 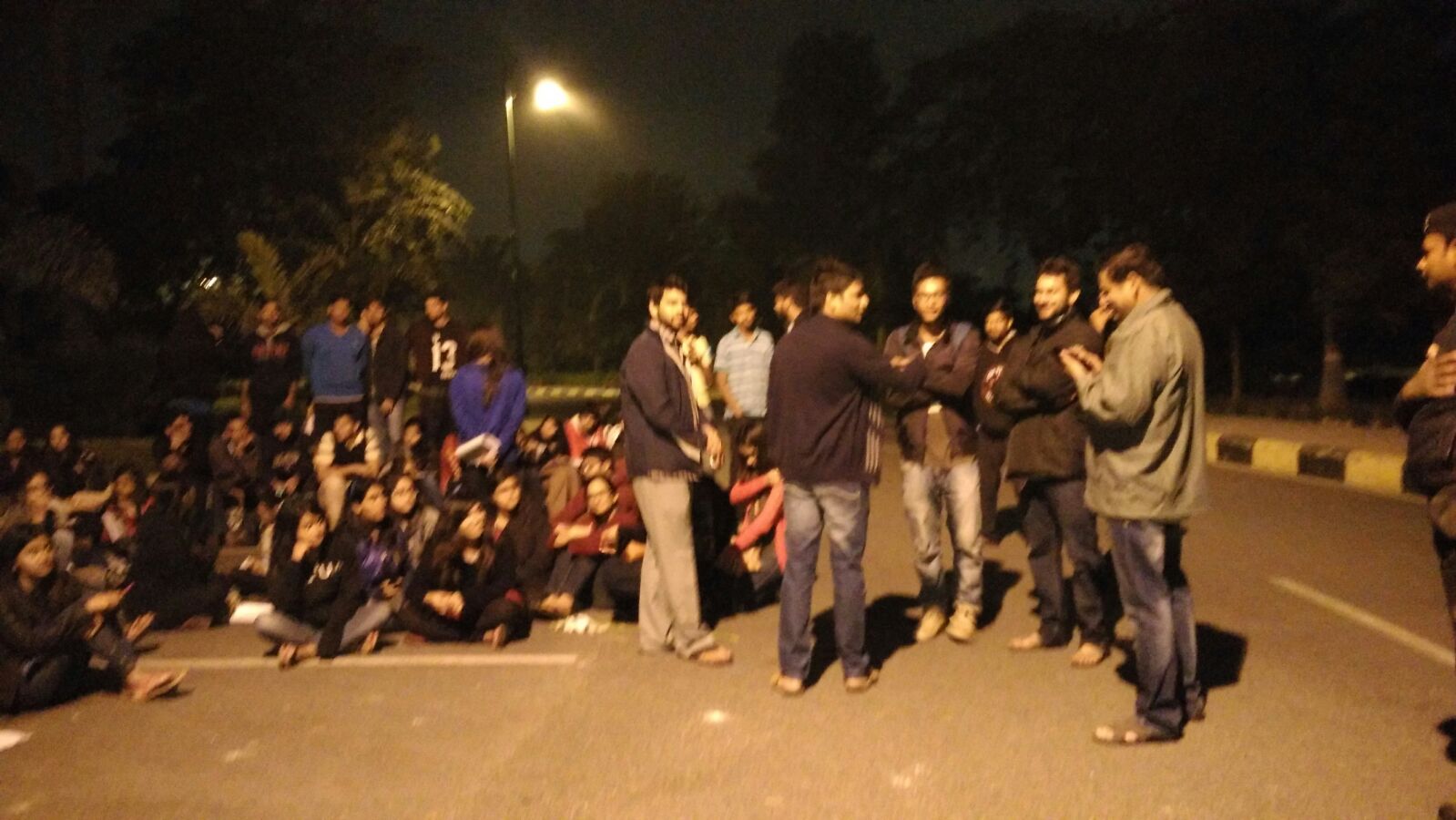 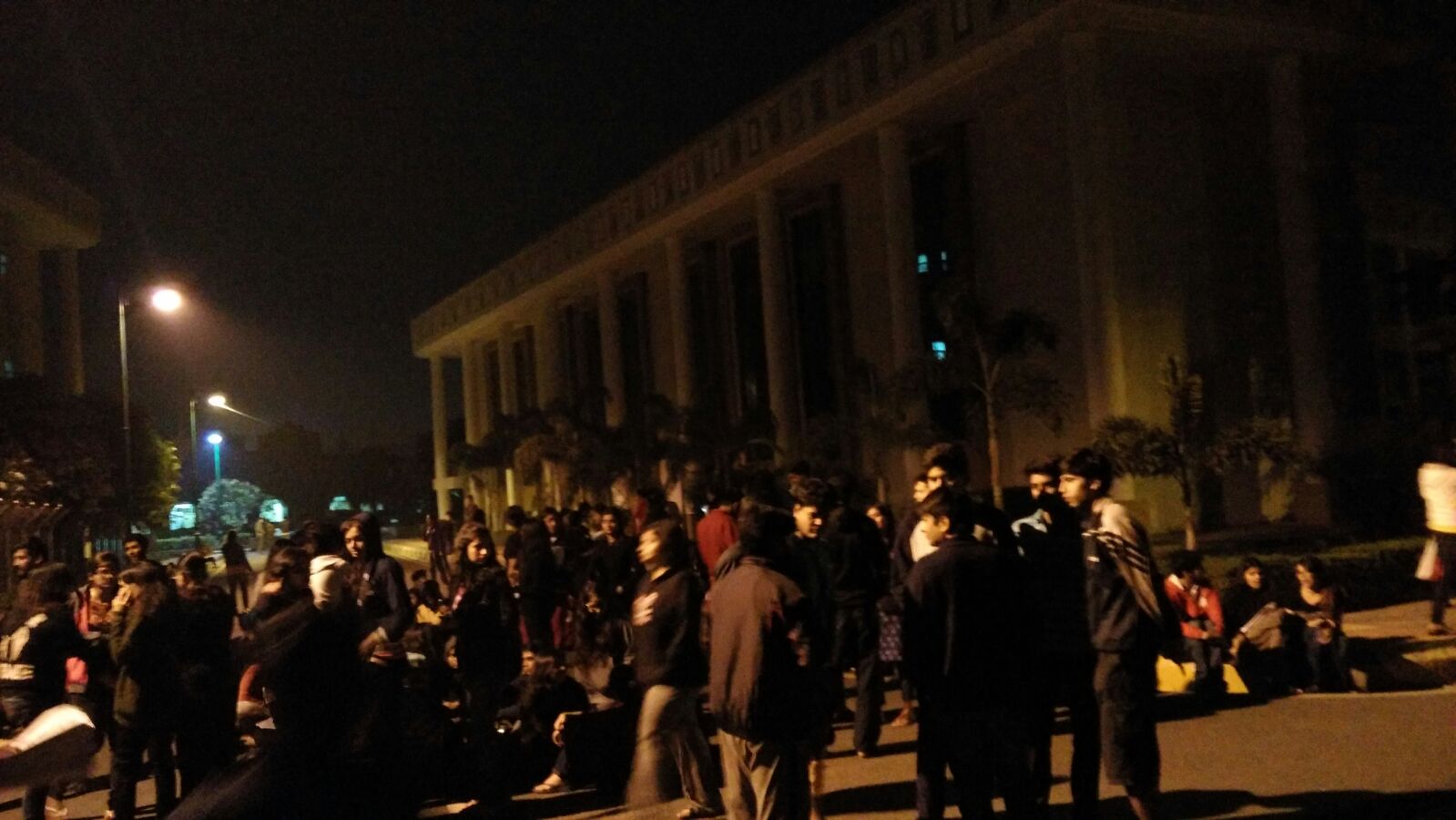 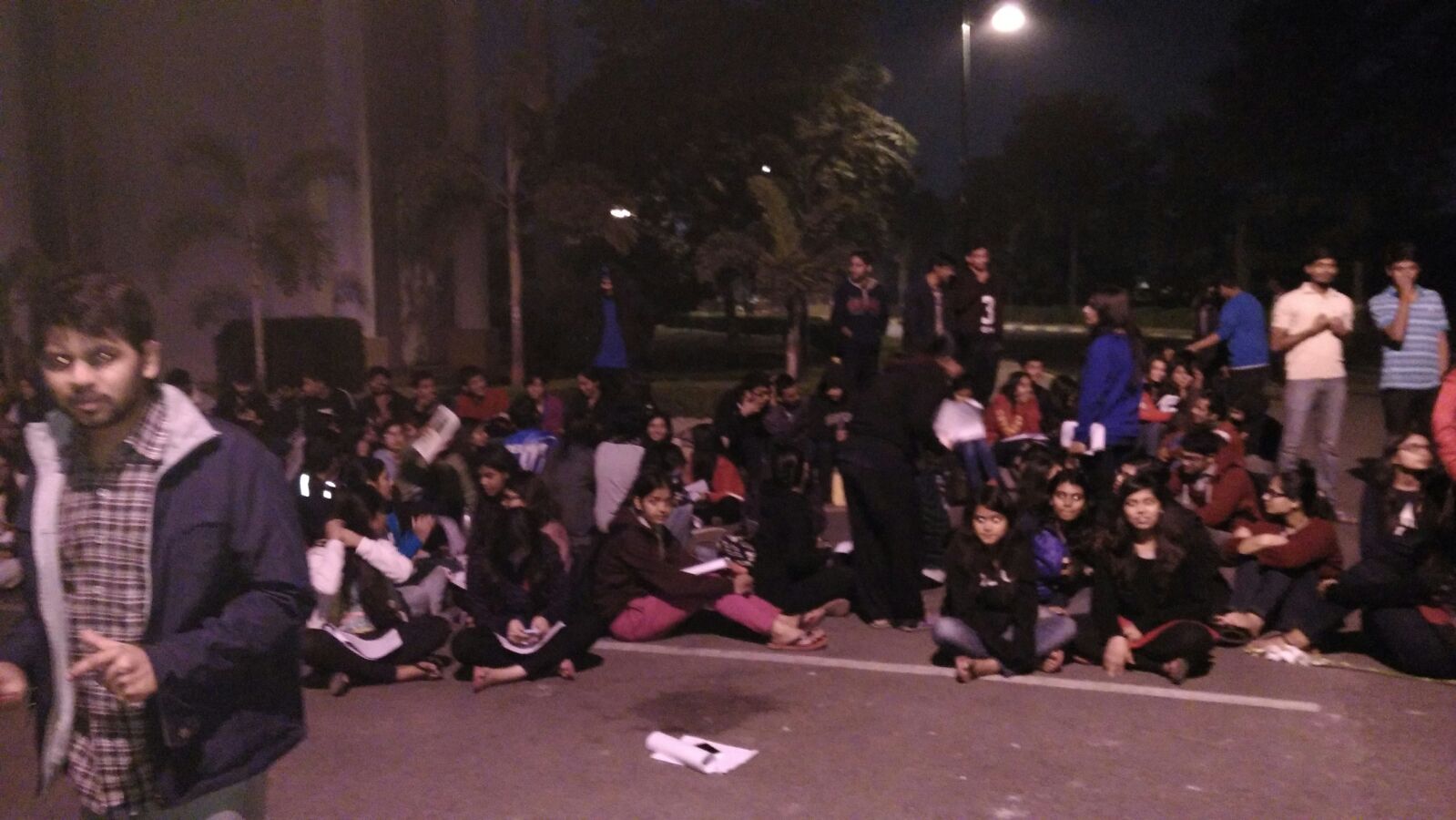 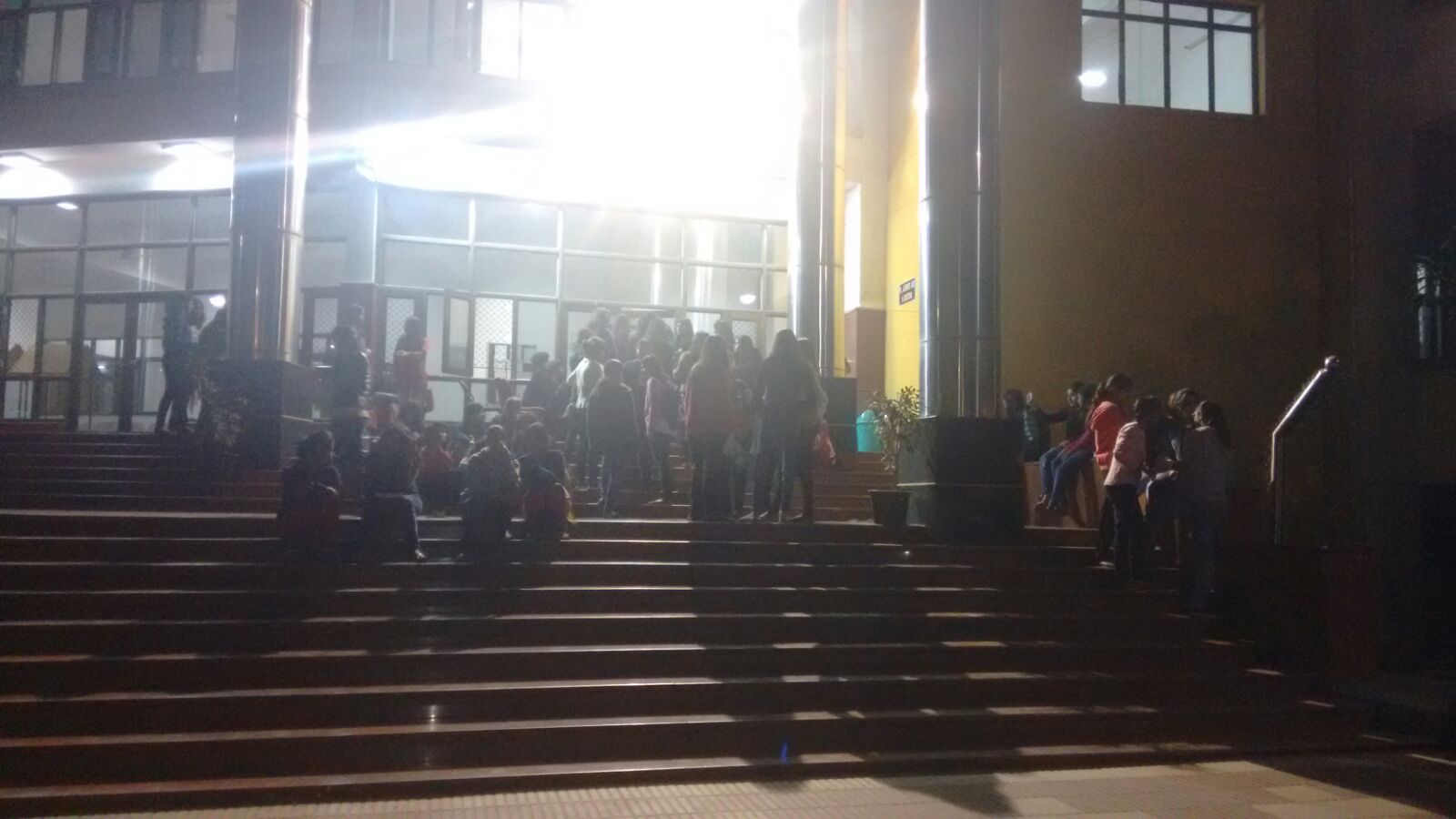 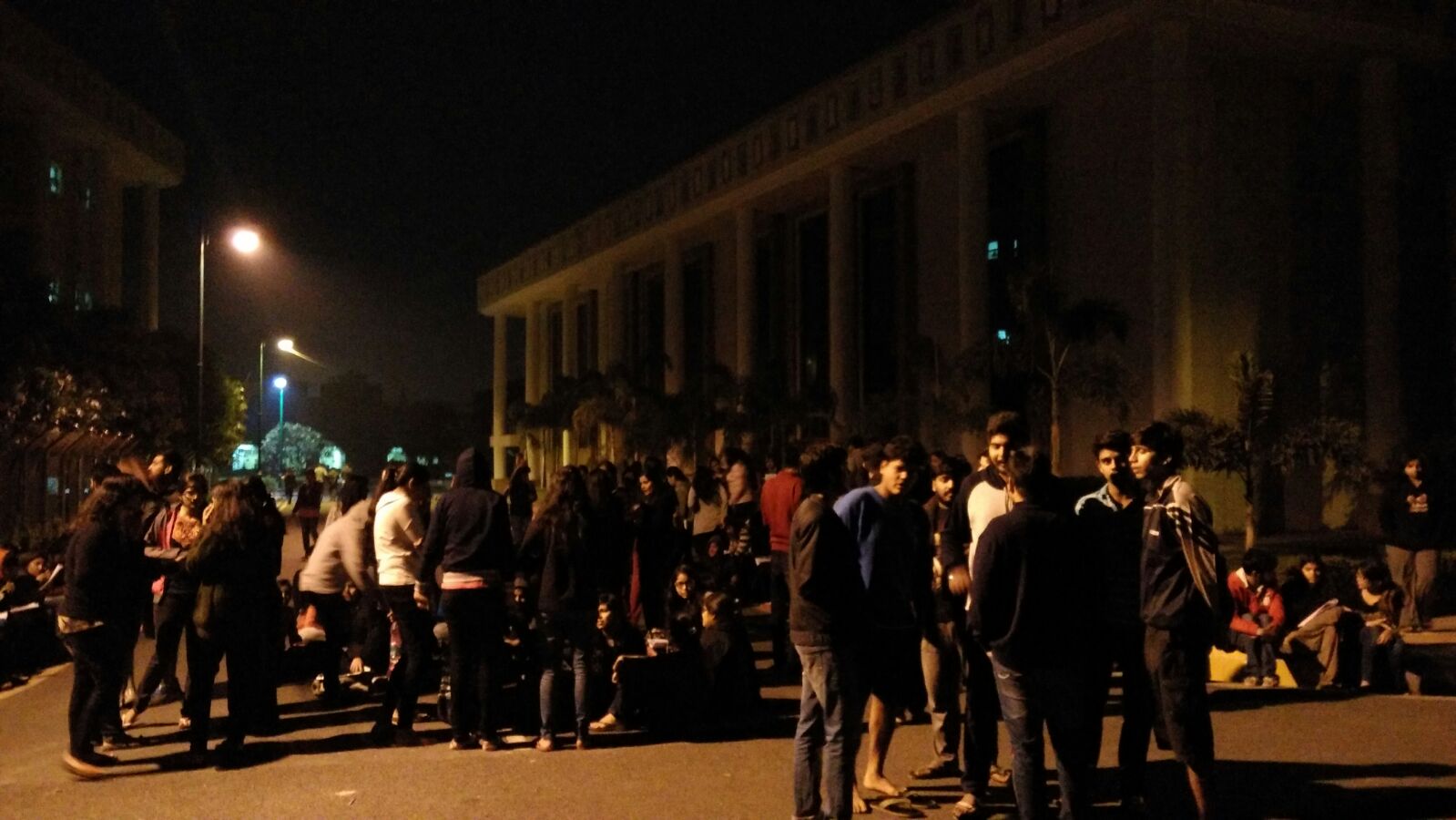