Contribute Now
Ad
It’s no secret that the streets of Indian cities are almost always a nightmare for people with disabilities. For a wheelchair-bound or visually impaired person, crossing the streets, negotiating pavements and using public transport is an obstacle course fraught with danger.

Now, more than three months since it was first announced, Prime Minister Narendra Modi formally launched the central government’s Accessible India campaign to coincide with the International Day of Persons with Disabilities on December 3. The campaign aims to make public places, transport and communication technology in India disabled-friendly by 2020. The government will also introduce an “Accessibility Index” to rate private companies on how disabled-friendly their buildings and policies are.

In a collaborative five-day campaign called “My Access”, non-profit organisations Point of View and Safe City are bringing able-bodied and visually-impaired women together to walk the streets of Mumbai together and map out their experiences of safe or unsafe spaces. The campaign, from December 1 to December 5, aims to bring issues of gender into conversations about accessibility for the disabled and, similarly, bring some focus to the problems of disabled women in discussions about women’s safety.

“I’ve never been out alone since my vision was impaired. In fact, this was the first time I went out on the streets without my parents,” said Rohini Bongane, a 27-year-old visually impaired student from rural Pune who lost her eyesight seven years ago. It was the first day of the My Access campaign on the campus of the National Association for the Blind, and Bongane had just finished a 30-minute walk around Worli with a sighted partner, 18-year-old Ria Candy.

While Candy, a mass media student at St Xavier’s College, doesn’t usually think twice about travelling around the city during the day, there were moments during the walk when both she and Bongane could relate to each other, as women, about safety. “Part of our route included a quiet, narrow lane that was so isolated, we both felt it would be unsafe to be there at night,” said Candy. 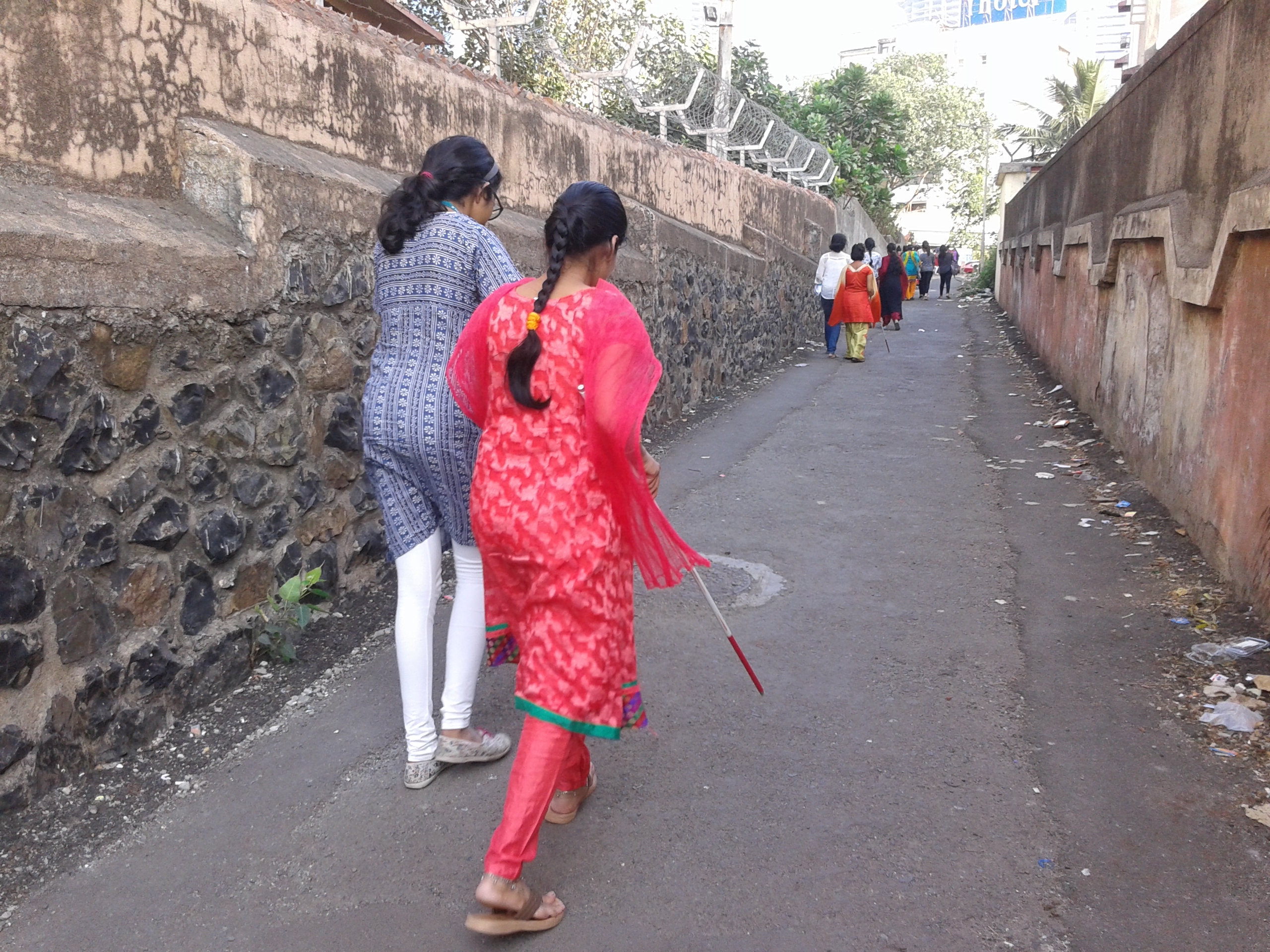 My Access participants walk down a narrow street in Mumbai.

Bongane and Candy were among 40 women – both sighted and visually impaired – who participated in the My Access street walks on December 1. In the discussions that followed, both groups were able to identify safety hurdles posed for women, people with disabilities in general and women with disabilities in particular.

People with visual disabilities, for instance, have to contend with rash drivers, the lack of auditory signals to indicate a change in traffic lights and uneven footpaths in which their walking sticks can get stuck. People on wheelchairs find it even harder to navigate Mumbai pavements, particularly when they are interrupted by bollards meant to discourage vehicles from mounting the sidewalk. 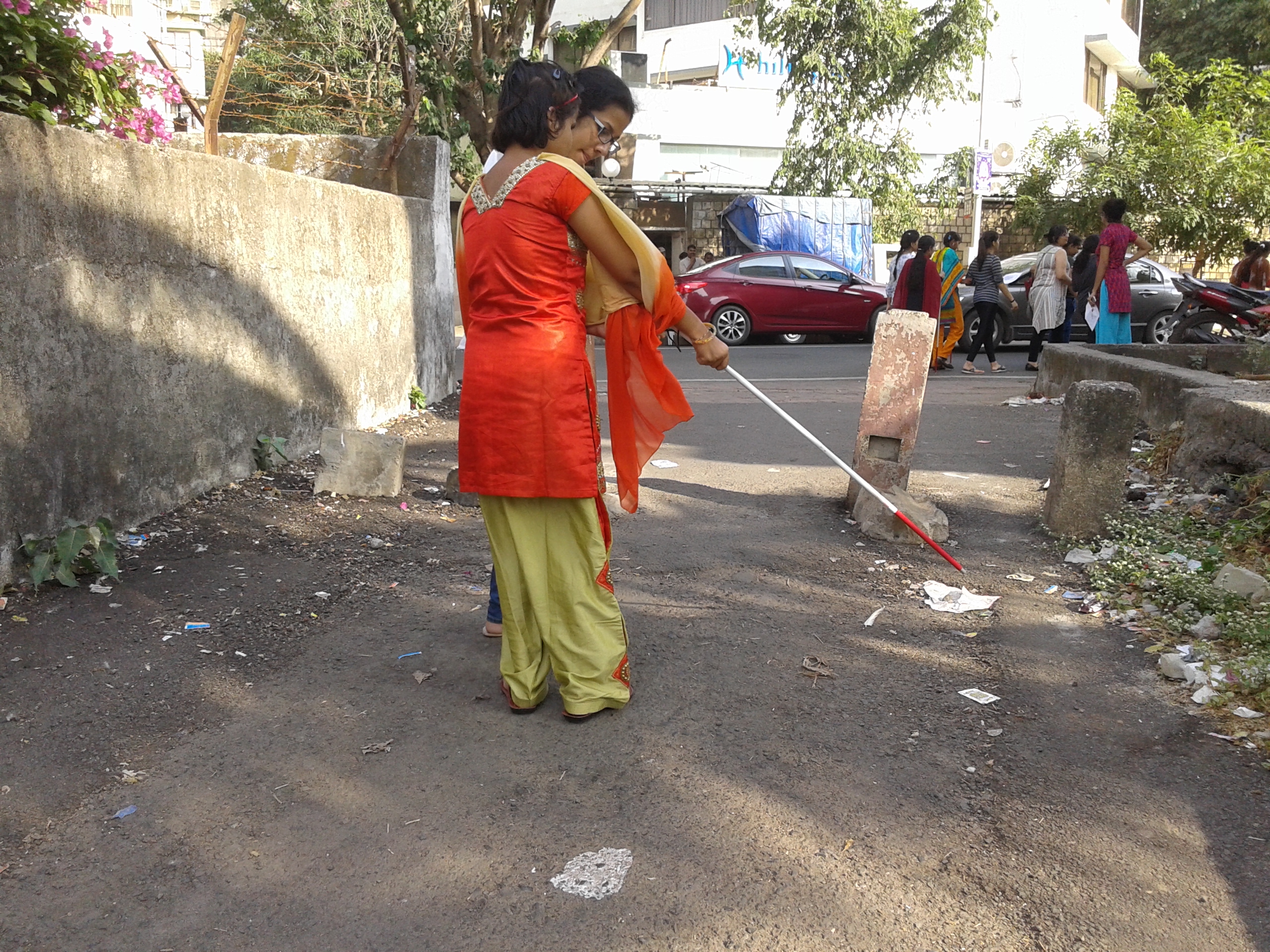 Bollards come in the way of a visually-impaired woman.

Unlike sighted women, visually-impaired women don’t often realise if they face unwanted stares from men on the street, but like sighted women, they are often nervous about using streets that are narrow or isolated, particularly after dark.

“I am always scared to go out on the streets by myself, but I know that my male friends who are blind go out alone much more often,” said Chandni Kamble, a 23-year-old visually impaired woman doing a teacher training course at the National Association for the Blind. “I would love to go out alone and build my confidence, but my parents are afraid of letting me, because I’m a girl.”

Point of View and Safe City, the organisers of My Access, hope that by recording these experiences, women with disabilities find a voice and a space in any interventions taken for women’s safety in public spaces as well as in interventions for improving accessibility of public places – such as the Accessible India campaign now launched by the central government.

“When activists talk about improving accessibility for the disabled, or when the women’s movement talks about safety in public places, the specific concerns of women with disabilities often slip between the cracks,” said Nidhi Goyal, the head of Point of View’s project on disability and sexuality and one of the organisers of the My Access campaign.

According to Anu Salelkar, a project officer at Safe City, attempts to make cities more navigable for women and people with disabilities must address one key question. “Does making a place accessible also make it safe, or are they two separate things?”