Contribute Now
Ad
Summary of events:
– Rain has let up in Chennai but large parts of the city remain waterlogged and many people remain displaced.

– Highest rainfall has been recorded in Cuddalore, 150km from Chennai, over the last 24 hours.

– India Meteorological Department says hopefully the worst is over for Chennai, but central Tamil Nadu continues to be vulnerable.

– The death toll in rain-related incidents in Tamil Nadu has gone up to 269.

– Union home minister Rajnath Singh called the situation “very alarming”. “It would not be an exaggeration to say that Chennai has become an island as it has been cut off from all national and state highways,” he said in Parliament.

– The National Disaster Relief Force have rescued more than 5,000 people from marooned areas. It has also doubled its personnel to 1,200.

– All trains originating, passing through and terminating at Chennai Central and Chennai Egmore have been cancelled till noon on Saturday. A few special trains were announced for Thursday night.

– Flights have been suspended at Chennai airport till Sunday. Stranded air passengers are being taken to a naval air station, 70km from Chennai.

19:45: The Indian army has released images of rescue and relief operations conducted earlier in the day.

19:30: Union transport minister Nitin Gadkari has announced the suspension of toll collection on all National Highways in Tamil Nadu till December 11.

19:15: While the rains relented in Chennai, heavy showers in Puducherry left large parts of the Union Territory inundated. Over 400 houses were damaged due to torrential rains, forcing evacuation of more than 10,000 people, reports Press Trust of India.

According to the Met department,  Puducherry and Karaikal regions as well as Cuddalore district in neighbouring Tamil Nadu were likely to get very heavy rains during the next couple of days.

19:00: Some more benevolence on display. A person in Chennai has offered meals to 700 people.

18:45: Southern Railway has announced special trains to ferry stranded passengers. It had earlier cancelled all trains originating, terminating or passing through Chennai Central and Chennai Egmore till noon on Saturday. 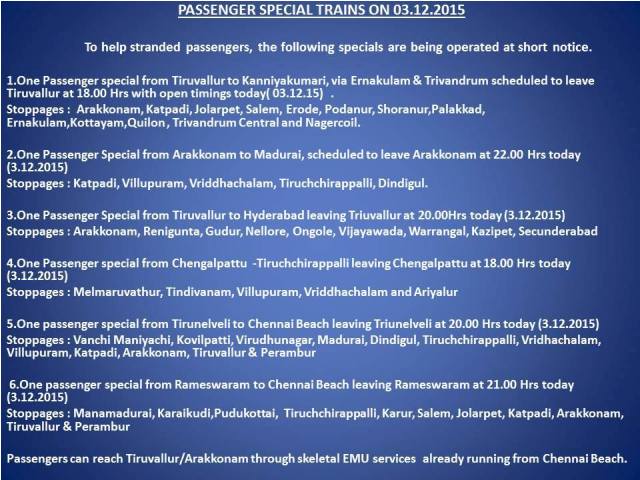 18:30: Some positive news coming in with Asian News International reporting that there has been no rain in the T Nagar and Saidapet areas of Chennai for the past four hours.

18:15: Lots of areas still without electricity as power stations remain inundated. Those unable to get in touch with friends and relatives in Chennai and surrounding areas, please look up the Tamil Nadu Flood – Support page on Facebook.

18:00: The sun came out for a bit in Chennai, but it had little affect on water levels in these areas of the city.

17:45: The Met department said that Cuddalore district was the worst affected over the last 24 hours. However, there is little information coming out the area. If you are unable to contact your loved ones in the area, please try these helplines:

If you are in Bengaluru, you can send relief material across to Cuddalore using the contact below.

17:30: Here is a first-person account of someone who went through a nightmarish 24 hours trying to get in touch with her stranded brother.

17:05: A flight carrying 130 passengers evacuated from the Chennai airport by Indian Air Force personnel has landed in Hyderabad. Earlier in the day, Air India had managed to transport 60 stranded passengers by road to Thiruvananthapuram while 35 passengers were accommodated in an Indian Air Force flight from Tambaram airbase.

17:00:  In Chennai, Prime Minister Narendra Modi has announced a flood relief package of Rs 1,000 crore for Tamil Nadu. This is over and above the Rs 940 crore given earlier to the state. “The government of India stands by the people of Tamil Nadu in their hour of need,” Modi said in a short statement.

16:45: LS Rathore, director of the India Meteorological Department, has said that coastal areas of the state have been badly hit. He said that there had been no heavy rainfall in Chennai on Thursday and that the highest rainfall in the last 24 hours was measured at Cuddalore.

16:30: Prime Minister Narendra Modi has reached the naval air base near Chennai to assess the flood damage and has met Tamil Nadu chief minister Jayalalithaa.

16:10: A spokesperson for Air India said the national carrier will operate a special flight from Hyderabad to Arrakonam Naval Air Station, which is 70-km away from Chennai, to bring back stranded passengers. Operations at Chennai's international and domestic airports have been suspended till Sunday, December 6.

16:00: One of the many selfless souls in the city, who put the safety of others above his own.

@ChennaiRains THIS GUY RESCUED SO MANY PEOPLE IN VADAPALANI, We took his picture, he asked us "ANY HELP?" #RESPECT pic.twitter.com/Iax4p8gkJ3

15:30: Facebook has activated its Safety Check feature for Chennai. People can mark themselves safe on the social networking site and their friends get notifications about the same. Google has also started a live Crisis response page, which has a list of relief centres, information about flooded streets. All the information is crowdsourced. You can access it here.

15:15: Here is the latest weather update from Skymet: While there has been no rainfall since 8 am on Thursday, Chennai and its surrounding areas are not out of the woods yet. The intensity of the rainfall in Chennai will be subdued over the next 24 hours. However, heavy to very heavy rainfall will batter several areas of Tamil Nadu including Cuddalore, Karaikal, Nagapattinam and Pamban.

14:45: Tamil Nadu chief minister Jayalalithaa has completed an aerial survey of the flood-affected areas in Chennai and has taken stock of the situation with senior officials.

14:30:The National Disaster Relief Force has decided to double the strength of its team helping the marooned in Chennai and adjoining areas. The NDRF had earlier in the day announced that it had rescued 2,400 people so far.

14.15:  Despite the overnight respite, there have been reports of fresh flooding of the streets in the heart of Chennai in areas like Kodambakkam, T Nagar and Ashok Nagar, reports Press Trust of India. It has been caused by the release of an estimated 8.5 lakh litres of water from the Chembarambakkam lake, one of the city’s sources of drinking water. The reservoir has been in spate because of heavy inflow due to rains in the catchment area.

14:00: Some more aerial views of the city from Indian Air Force choppers.

13: 45: The union territory of Puducherry is also struggling with the floods.