Become a Member
Ad
It’s an image that poignantly captures the disaster in Chennai, created in part by nature and in part by humans. A row of aircraft sits in a carpet of grey, water lapping their nose cones. The airfield is inundated, with the red-and-white traffic control tower craning its neck out.

If it hasn’t already, the image of the submerged Chennai International Airport should set the alarm bells ringing in the offices of CIDCO, or the City and Industrial Development Corporation of Maharashtra. A town planning agency wholly owned by the Maharashtra government, CIDCO is building a “world class” airport near Panvel, an extended suburb of Mumbai, despite loud protestations. Environmentalists have long warned that constructing the Navi Mumbai International Airport on ecologically fragile terrain, over one river and close to another, could spell disaster.

As an intense downpour lashed Chennai, its airport runway disappeared under water and all operations were fully suspended on December 2. Operations resumed on Monday, five days later. Economic losses are yet to be calculated, but they’ll likely run into crores. The India Meteorological Department has warned that rains may continue for a few more days due to a “trough of low” pressure over southwest Bay of Bengal, off the Tamil Nadu coast.

Environmentalists say they had cautioned against the flooding of Chennai airport, which is built on the floodplains of River Adyar. Its second runway runs over the river itself, with a bridge constructed across Adyar extending the runway’s length by 1,400 metres to a total of 3,445 metres. “The bridge accommodates the runway and a taxiway, making Chennai Airport the only international airport in India to have a runway across a river,” boasts the airport’s Wikipedia page.

The bridge was constructed above the water levels during the 2005 flood in the southern city, but it failed to take into consideration freak weather events. So, when the skies opened up in November and Adyar overflowed, it spread the excess rainwater on the airport runway to reclaim its original path.

“Chennai is not an isolated example,” said Parineeta Dandekar, associate coordinator of the South Asian Network on Dams, Rivers and People. “All our cities, such as Hyderabad, Bengaluru, Mumbai, Pune and Delhi, have encroached upon their water bodies and riverbeds, leaving very little space for water to flow. Freak weather events are on the rise and when it rains very heavily, it is natural for the river to carry the excess water and follow its original course.

“Floodplains are an integral part of the river ecosystem. During heavy rain, floodplains come alive and absorb the floodwater. They not only regulate floods but also maintain hydrograph of the river by slowly releasing water into the river [thus mitigating drought] and purifying water through riparian vegetation.” 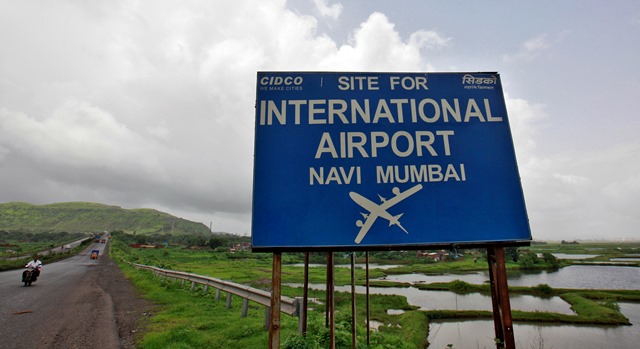 CIDCO says the Navi Mumbai International Airport will be among the world’s largest greenfield international airports, offering world-class facilities to passengers and airlines alike. To be built at a cost of Rs 14,574 crore, the core area of the airport requires 1,160 hectare.

The planned airport has been embroiled in controversy from the beginning. For its site, the authorities chose a site 60 kilometres from Mumbai that falls under coastal regulation zone, where construction activities are banned or regulated.

In June 2009, the Union Ministry of Environment and Forests had raised objections when it found that the airport will come up on 150 hectare of mangroves and 340 hectare of coastal marshland, including 118 hectare of water body. The proposed site is a low-lying land and has two rivers – Ghadi and Ulwe – flowing through it before draining into the Panvel creek. Whereas Ghadi river flows along the boundary of the proposed airport, Ulwe cuts rights across the two proposed runways.

As per the environmental impact assessment conducted by the Indian Institute of Technology-Bombay and Pune’s Central Water and Power Research Station, Ghadi river would be “trained”, while Ulwe river would be “diverted” at a right angle (see map below). A 90-metre hillock that is obstructing the safe landing and take-off of aircrafts would also be flattened, and the soil and debris from the hillock would be used to reclaim the low-lying marshland. 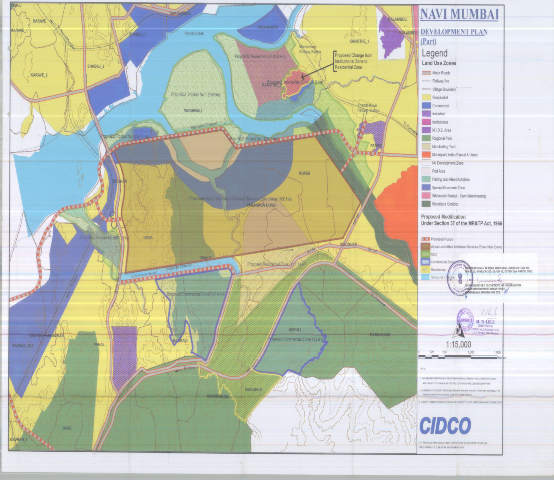 Raising serious questions on the project, the Environment Ministry had informed the then Union aviation minister, through a letter dated June 17, 2009, that the identified area was of great ecological value and “…no compensatory afforestation is possible to substitute for the loss of these mangroves”.

A year later, on May 5, 2010, a public hearing was held in Panvel, which was boycotted by all the 18 villages affected by the airport project. They were demanding due compensation and an attractive relief and rehabilitation package. Still, in November 2010, thirteen years after the project was first proposed, the Environment Ministry cleared the Navi Mumbai International Airport with riders for CIDCO, including compensatory plantation and protection of 615 hectare mangroves.

CIDCO missed the 2014 deadline for the first phase of the airport and the pre-development work – levelling the ground, cutting the hillock and reclaiming the marshland – is yet to begin. The deadline has now been pushed to 2019 as land acquisition is still incomplete. Nevertheless, a mangrove park that was to be developed adjacent to the airport has been relocated, and CIDCO is demanding exemption from the coastal regulation zone norms.

Despite the warning signs from Chennai, Sanjay Bhatiya, managing director of CIDCO, insists that “there is no problem at all with Navi Mumbai airport”. “We are constructing proper drainage systems, holding ponds, etc which will drain excess water into the sea,” he said. “We got a very high level scientific study done by an institution which has recommended flood control mechanisms and other precautions. We are following those.”

Nevertheless, environmentalists want a review. “Keeping in mind the recent flooding of Chennai’s airport, the delay of NMIA appears more like an opportunity to rethink the environmental costs of the proposed airport project, which will tweak two rivers, flatten a hillock and destroy mangroves,” said Rishi Aggarwal, a Mumbai-based environmentalist.

Aggarwal cautioned that mangroves are the best natural protection against floods and provide localised benefits. “Just because IIT-Bombay has conducted EIA [environmental impact assessment] of the Navi Mumbai airport, it does not make the project sacrosanct,” he said. “The solutions of IIT-Bombay are heavy engineering solutions and don’t include the ecosystem services provided by rivers and mangroves.”

In July 2005, when Mumbai was inundated, the city airport was flooded and shut down as the Mithi river, whose course had been changed to build the runway, breached the airport wall and started flowing through the airport.

Dandekar says the flooding of Chennai airport should serve as a wakeup call for the Union Environment Ministry, which is sitting on the river regulation zone notification for the last six years. “The proposed RRZ would divide river courses into various ecozones depending on the climatic conditions, state of degradation, human use and potential for restoration,” she said. “It would restrict construction activities on the floodplains and regulate other activities along the rivers.”

Several developed countries have realised that urban floods cannot be controlled by heavy engineering solutions alone. The Netherlands, a low-lying country, has a unique Room for the River Programme whose aim is to give the river more room to to manage higher water levels. Its government is spending €2.3 billion in over 30 crucial river locations, protecting 4 million people living in flood-prone areas.

Similarly, the United States Department of Agriculture has an “Emergency Watershed Protection Program–Floodplain Easement Option”, which restores, protects, maintains and enhances the functions of floodplains while conserving their natural values. Structures, including buildings, within the floodplain easement are removed, or relocated outside the 100-year floodplain or dam breach inundation area.

Chennai floods are a strong reminder that we, too, must learn to make room for our rivers.

Nidhi Jamwal is a Mumbai-based freelance environment journalist. She tweets at @JamwalNidhi.

Opinion: Joshimath was a disaster waiting to happen, but nobody paid heed