The data discrepancy, reported by Factly.in, a data journalism portal, is important because as an intolerance debate roils India, much attention is being focused on whether such riots have increased or decreased since Narendra Modi took over as prime minister in May 2014.

The Home Ministry has now ordered a probe to find out why its data on communal riots vary from those of the NCRB, which it controls.

IndiaSpend previously reported how Karnataka, Madhya Pradesh and Uttar Pradesh are India’s communal tinderboxes, according to data tabled in the Lok Sabha.

Is the way hate speeches are listed the cause of the data dispute?

The NCRB numbers could be high only because hate speeches qualify as “incidents” and are listed under riots in NCRB data, while they might not be counted as incidents by the human rights division of the MHA.

Even so, the NCRB numbers should be higher in every state.

The only plausible reason for the discrepancy is faulty reporting by state police and intelligence departments, calling into question the sanctity of government data.

The biggest difference in data is in Uttar Pradesh

Jharkhand, Haryana, Tamil Nadu and West Bengal do not have significantly more riots, according to the MHA data.

Indeed, there are less than 20 riots in each of those states, as per the MHA data. Uttar Pradesh, which had the highest number of riots (133), as per the MHA, is eighth in the NCRB list with 51 communal riots. 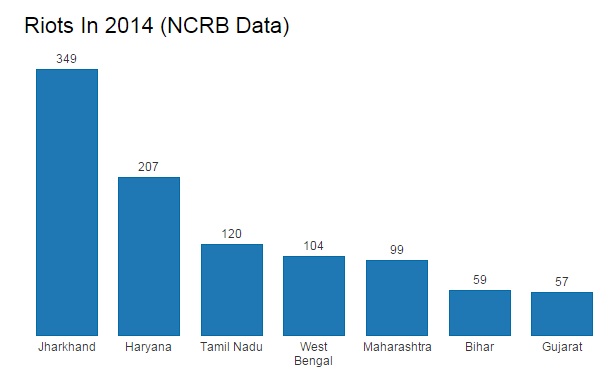 Both data sets list about the same number of victims: the MHA 2,016; the NCRB, 2,001. There are other points of commonality.

What the home ministry and NCRB agree: 13 states reported no riots

Home Ministry and NCRB data match only for 13 states/UTs, and these are states where both NCRB and MHA report no riots.

There is a double-digit difference in 11 states, and the difference is significant in 10 states. The MHA reported only 10 riots for Jharkhand, while the NCRB reported 349. 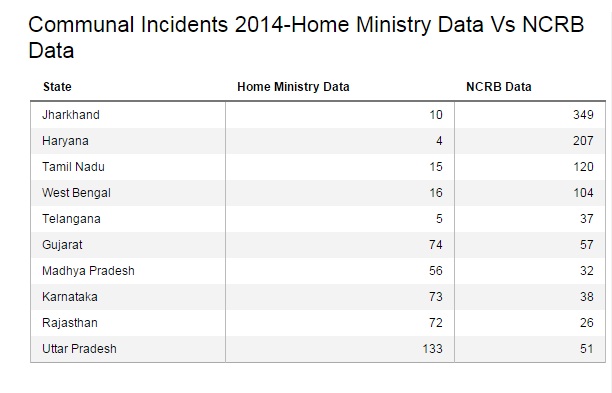 How the NCRB changed its method of data collection

The NCRB maintains a secure national database of crimes, criminals and law enforcement agencies, collecting data from state police departments, compiling it into an annual Crime in India report.

The NCRB made significant changes to collection and dissemination of crime data in 2014.

There is a separate section for data on offences that promote enmity between different groups, as defined under Sections 153A and 153B of the IPC.

Before 2014, all the data related to riots were collected under one head called riots. From 2014, the data on riots is categorised into many different sub-heads, namely communal riots, industrial riots and riots for political reasons etc.

The data collected under Sections 153A and 153B is counted as communal riots.

The NCRB gets data from state police departments. These data are based on the sections of law mentioned in the first information report.

The NCRB also follows what is called the ‘Principal Offence Rule’ for counting crime. So, among many offences registered in a single case, only the most heinous crime will be considered as a counting unit, thereby representing one case.