Contribute Now
Ad
“Come with force,” reads a message from organisers of the ‘Beef Festival’ scheduled for Tuesday, December 10, at the campus of Osmania University, Hyderabad.

The message, which flies in the face of a stay order issued by a lower court, is a sign of escalating tensions since the Dalit Bahujan Cultural Association announced the festival a week ago.

Nearly 200 police personnel have been deployed on campus, and 16 police vehicles have been stationed in front of the hostels and other key buildings. On December 8, around 40 students were detained when they attempted to conduct a rally in support of the festival. “Neither beefing up of security nor arrests are uncommon here,” said a senior police official. 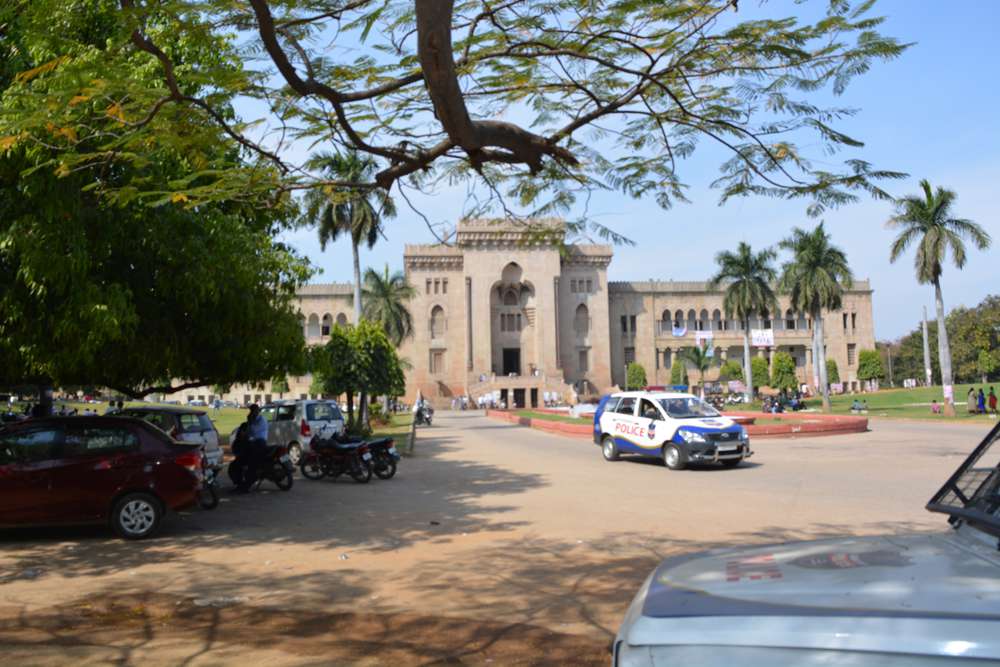 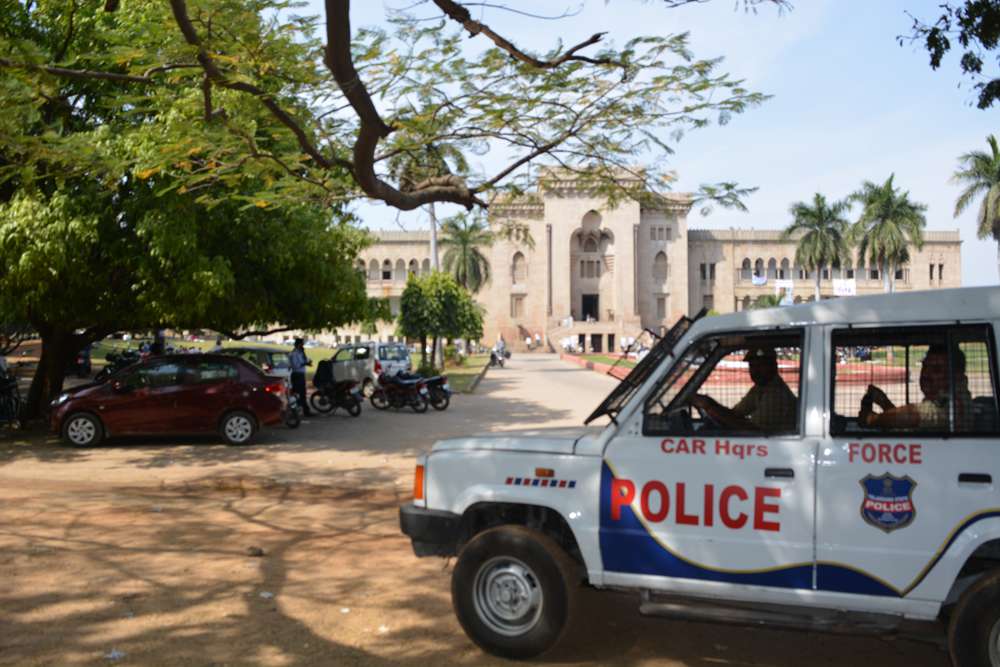 Police patrolling near the Arts college building in the Osmania University campus. (Clicked on Tuesday)

Meanwhile, the controversy escalates exponentially with various groups jumping into the fray. A pork festival has been announced by a rival group; another has demanded the cow be protected, and the political class has heightened its rhetoric. “I will kill or be killed to protect Gau-mata,” Bharatiya Janata Party member of Legislative Assembly Raja Singh said in one of the more extreme of the statements doing the rounds.

Representatives of the Democratic Cultural Forum, an umbrella group of over 25 student organisations supporting the beef festival, say the question of cow slaughter is a red herring. “We have been saying that we will source beef from the local slaughter houses, which are permitted by the state government,” a Forum representative said.

The pork festival, a counter plan announced by student leader Srinivas Solanki, has found no opposition among the students, unlike the beef ban. “It is because they are divisive forces and we are uniting ones,” said Solanki, who till recently was associated with the Akhil Bharatiya Vidhyarthi Parishad. He resigned because the ABVP, which was involved in incidents of violence against a similar beef festival in 2012, “doesn’t support pork and doesn’t oppose beef.” 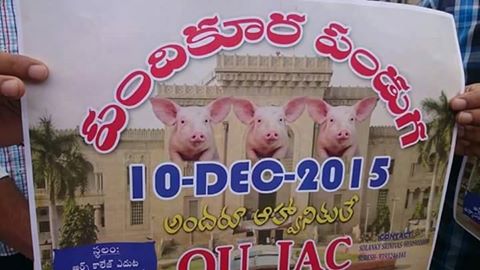 The official opposition has heightened in the run up to both the beef and pork festivals. The Osmania University Teachers Association, the university administration, state police and the lower courts have all issued directives against the festivals.

"Beef and pork festivals are ruining and tarnishing the name of the university, and the campus may lose placements this year," said Prof B Satyanarayana, president of the teachers association. “Be it beef or pork, why not eat what you want in your hostel rooms? Why make it a public event and host press meets?”

This, says Solanki, is also the argument of the pork festival group. “Eat it in your hostel rooms and homes. Don't bring your food onto the campus.”

A majority of those opposing the festival say they are not opposed to students eating beef, per se – their problem is with the Dalit Bahujan and allied student groups wanting to make a public spectacle of it, which could prove incendiary.

Beef festival organisers however argue that there is a larger principle at stake. “It is not about beef alone,” says Shankar, one of the organisers. “If we are expected to restrict our cultural practices to private spaces, the same should be true for everyone. Why doesn’t the administration take disciplinary measures against other un-academic events?

“On November 25, the RSS [Rashtriya Swayamsevak Sangh] organised a 'Kotagiri Utsavam' and many students were forced to attend it,” says Shankar, alluding to an event on February 28, 2015 when the university’s RSS shakha celebrated the its annual day in front of the Osmania University Arts college building, the location picked for the December 10 beef festival. 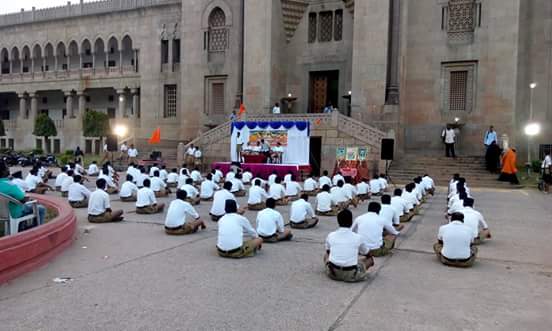 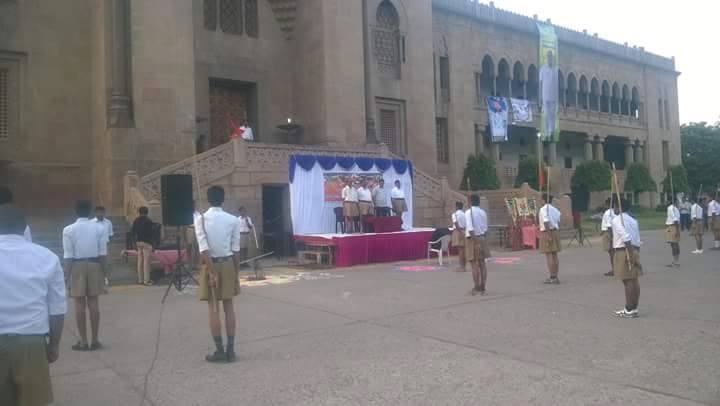 “If there was an objection to hosting the shaka the administration would have stopped us,” argued Solanki, a member of the university’s RSS wing. “If the University can keep public spaces open to them, then why not for us?” counters Sharath Chamar Naliganti, Chairman of the Dalit Bahujan Cultural Association.

Students supporting the beef festival point to other instances where un-academic, cultural or religious festivals were celebrated on campus.“There are 14 temples and two mosques on campus,” says research scholar David Raj. “Why is the university allowing these religious institutions to be operational if it doesn't want anything other than academic activities?”

“Every year, Ganesh Chaturthi is celebrated and idols are installed in front of the hostels,” adds Sharath Chamar Naliganti. “Ayudha Puja is performed, and even computers are smeared with vermilion (kumkum). If our cultural practices like eating beef are a problem, then these other practices should also be seen the same way.”

David Raj concurs.“The hostel mess stops serving non-vegetarian food and even eggs during the nine days of the (Navaratri) festivities to uphold the faith of a few,” he points out.

Beef festival organisers say their core demand to the administration is simple: ban all religion- and caste-based celebrations from campus premises.

Such divisions are mirrored among the 600-odd members of the teaching staff, not all of whom agree with the teacher association's official stance. Prof Laxman Gaddam of the Commerce Department argues that "Beef doesn’t mean cow alone, and in any case it is not a banned commodity in the state of Telangana.It will be against the spirit of the constitution to prohibit the festival.” He will participate in the festival on Tuesday, he added.

As arguments and counters get increasingly heated, the stage is set for a show-down. Organisers of both the beef and pork festivals say that they will hold their respective events in front of the Arts College building on Tuesday, December 10.

The denial of official permission, and even the possibility that they could be held in contempt of court, leaves the both sets of organisers unfazed. Since they sought no permission, they say, its refusal is of no consequence. “They can reject permission when we ask for it.”

The High Court of Telangana and Andhra Pradesh upheld the order of the lower court to stay any kind of festivals in the university campus on December 9. However, Stalin, member of All India Students Federation and one of the beef festival organisers said, "We respect the courts, however, we haven't been made party in the petition at the lower court based on which the stay has been ordered. We will continue with our plans and hold the beef fest."

The pork festival organisers did not respond to calls.