Under grey-blue skies in Paris, a day after the United Nations Climate Change Conference, or COP21, was initially scheduled to end, the intense two-week negotiations ended in backslapping and hugs and much self-congratulation. Nearly 200 countries adopted an agreement that could ostensibly save the world from disastrous climate change.

Whether it will succeed, how it will succeed, and who exactly will have to pay for this ambition hides under the veneer of nice-sounding words and crafty side-steps. Somewhere in there, science, history, equity, and decisions based on hard reality seem to have gone completely missing.

Here’s how the operative part of the final, much-lauded text shakes down:

What does this really mean? A temperature target must necessarily correspond to a carbon budget. That is, how much carbon headroom do we have before the average temperature increase hits 1.5 degrees Celsius? And who will use how much of that headroom? By when?

The developed countries have used up their budget, even overdrawn on it. But there is no mention of correcting or balancing this historical inequity in favour of developing countries.

Moreover, the current plans of nations – the Intended Nationally Determined Contributions – puts the world on course to warming well above 3 degrees Celsius. A telling infographic by carbonbrief.org  shows us how many years of current levels of emissions will use up this carbon budget. The final text, however, does not seem to base itself on this science. 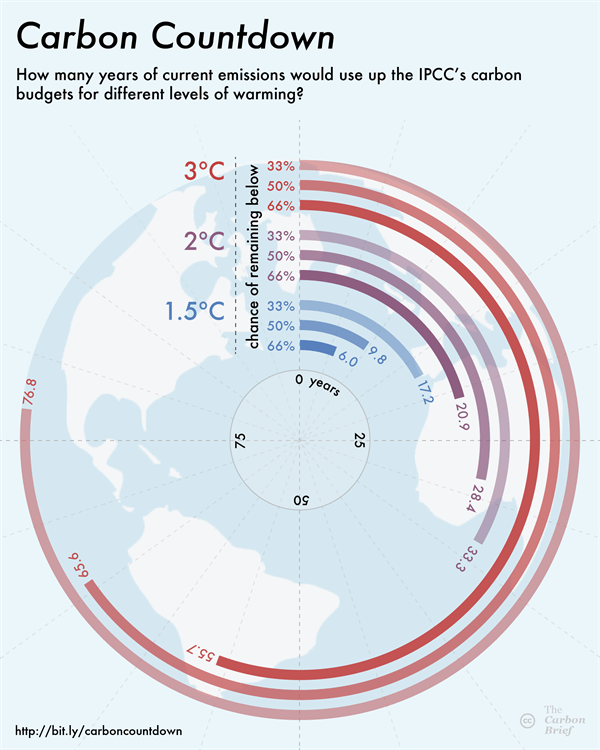 “This Agreement will be implemented to reflect equity and the principle of common but differentiated responsibilities and respective capabilities, in the light of different national circumstances.”

The Centre for Science and Environment, located in India, points out that this differentiation becomes weak when left to “capabilities” and with no reference to “historic responsibilities.”

The developed countries were to make available $100 billion per year to enable developing countries to mitigate and adapt to the disastrous effects of climate change. In the final agreement, however, this number figures only in the preamble but not in the operative, legally binding section.

Under this agreement, small island states and coastal areas already suffering severe losses because of rising sea levels and extreme weather, not to mention farmers and fishermen facing the brunt of droughts and floods, cannot claim anything from the developed world for liability and compensation. In other words, the big historical polluters essentially walked away from Paris having washed their hands of any responsibility for the damage they have already caused.

That the small island states who were so vocal in the run-up to these talks capitulated and signed on to this agreement gives one an idea of what went on behind closed doors. For an idea of how the spirit of the text changed over the second week, here is a telling example: The draft that was presented by the Platform for Enhanced Action to COP21 had these words in the important Article 2, the “purpose”:

[This Agreement shall be implemented on the basis of equity and science, and in accordance with the principle of equity and common but differentiated responsibilities and respective capabilities, in the light of different national circumstances, and on the basis of respect for human rights and the promotion of gender equality and the right of peoples under occupation]

All of it was bracketed, which meant that it was under review and discussion. (The run up to the final day of any COP is all about what “is bracketed” and what is “now out of brackets” or “completely gone.”)

Here’s the bit that made the final text:

“This Agreement will be implemented to reflect equity and the principle of common but differentiated responsibilities and respective capabilities, in the light of different national circumstances.”

In other words, “equity,” “science,” “human rights,” “gender equality” and the “rights of peoples under occupation” were all sacrificed in the Purpose.

There were indigenous people from around the world at the conference fighting to get their rights heard, to have those key clauses “put back” into Article 2, but to no avail.

In passionate press conferences – a refreshing change from the clinical insipid conferences held by non-governmental organisations and government lackeys – the indigenous people spoke of protecting freshwater ecosystems, the land, wild fruit, medicinal plants, food security, and land integrity. They spoke of the violation of collective land rights, and of the “double discrimination” their women face from being, firstly, women and then indigenous to boot.

Indigenous women are at the short end of the stick when it comes to climate change. They are the ones that build houses, find fuel to cook and energy to run their homes, they fetch the water, they produce the food.

Speaking at the women’s caucus one early morning at COP21, Edna Kaptoyo, a Pokot woman from Kenya, said, “We had a culture where we preserved wild fruits for when we didn’t have enough food and grains. My mother did this for our family. But today, these fruits have disappeared. Our rivers are rain-fed. But now, they are drying out – something that has never happened before.”

Coming from the Arctic north, Mataali Okalik, an Inuit Youth Council leader dressed in a sealskin skirt and reeling from jet lag, said, “We have been seeing the impacts of climate change for many years. Our elders have been saying for decades that these impacts are detrimental to not only our people but for the rest of the world. But traditional knowledge is not deemed important. If it had been, we would have been steps ahead.”

These indigenous people expected COP21 to recognise their rights, and to respect their traditional knowledge as sustainable and valid. Frank Ettawageshik, representing the International Indigenous Peoples Forum on Climate Change, said in his address to the Closing Plenary on December 12:

“It is essential that the rights of indigenous peoples be recognised, protected and respected within a broad human rights framework. We sought such assurance in the operative section of the Agreement. We are keenly disappointed that the Parties did not see fit to accommodate this request in which we joined with a broad constituency.

“We … came seeking recognition, respect for, and use of our traditional knowledge, with our free, prior, and informed consent.  We appreciate that a provision appears in the operative section under adaptation, but it should apply everywhere in the Agreement and Decision without the qualification “where appropriate”.”

How nations negotiate their Intended Nationally Determined Contributions and what, if anything, will balance equity and rights in this new, but-not-really-new, regime remains to be seen.

The preamble of the Paris Agreement seems to have its heart in the right place. The operative text, however, seems to have sold its soul to the highest bidder. Some insist it is a start, that there is now something on the table – but to hail it as the saviour the world was waiting for is anything but the truth. This is no "get out of jail free” card.

But wait. It is exactly that for some.