Contribute Now
Ad
Almost two years after the landmark Sexual Harassment at Workplace Act was put in place, companies and the government are still figuring out the provisions of the Act and how to make it work. The Act borrowed heavily from 18-year-old Vishakha guidelines and made it mandatory for each company to set up an Internal Complaints Committee to deal with the cases of alleged sexual harassment at work place or places related to work.

While the Act made the constitution of these committees mandatory, it doesn't make it mandatory for the companies to disclose the status of their formulation and the implementation of the guidelines of the act itself.  This implies, that those cases that crop up within a private organisation will never make it to public if a police complaint is never filed.

This is probably what prompted the Minister for Women and Child Development Maneka Gandhi to propose recently that the disclosure related to composition of Internal Complaints Committees should be made mandatory in annual reports of the companies.

Her proposal, however, was promptly turned down by her cabinet colleague Arun Jaitley.

Minister of Finance and Corporate Affairs Jaitley said that the industry representatives were against “enhanced disclosures under the Companies Act, 2013 and adding to these may not be desirable”. Gandhi responded back and asked Jaitley to reconsider his decision in view of implementing the Sexual Harassment at Workplaces Act in “its true spirit.” 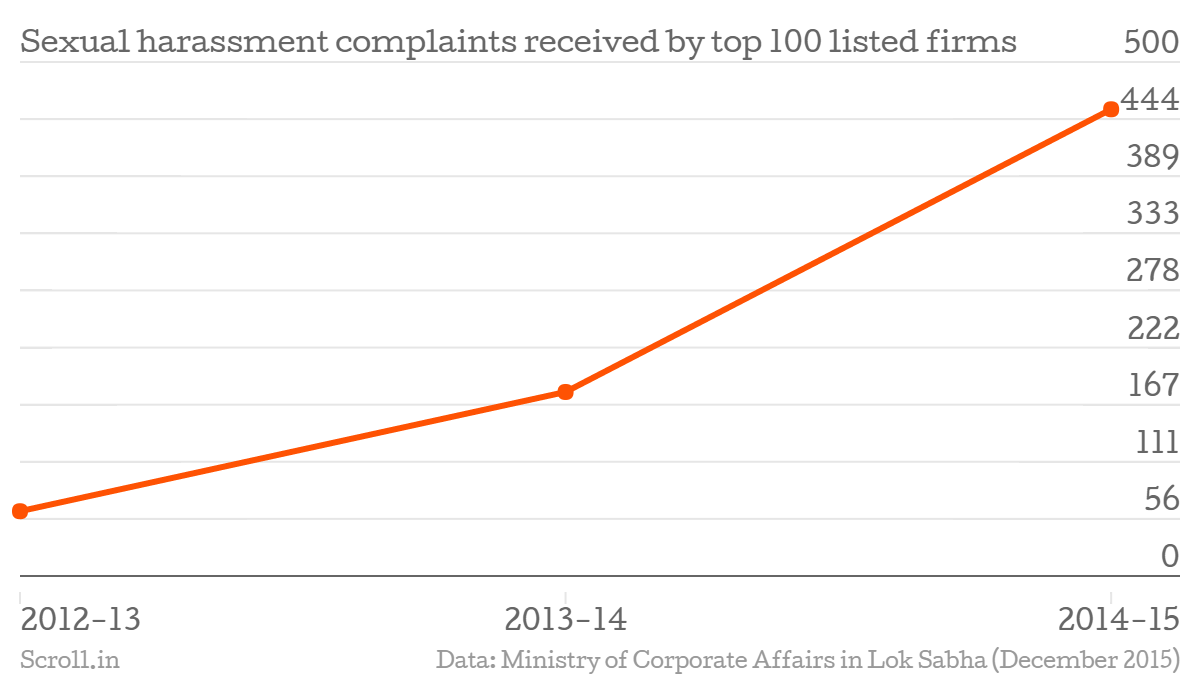 This data is available because India's capital markets regulator, Securities Exchange Board of India, mandated in August 2012 that the top 100 listed companies on the National Stock Exchange as on March 2012 need to file a Business Responsibility Report each year, which contains questions about the number of sexual harassment cases that a company received and their status, along with other details.

Experts suggest that the implementation of mandatory disclosures for these companies through their Business Responsibility Reports have had a positive effect at least in terms of more cases coming to light.

“The questions under the Business Responsibility Reports framework are very broad and vague so they are not necessarily indicative of the kind and quality of action that was taken on these complaints,” said Shireen Kurian, a Consultant with Praxis, a non-profit development organisation which looks at policy implementation and companies’ disclosures. “The requirement to disclose these cases, however, is a good first step since it brings to light the prevalence of such instances and what companies are doing about it.”

Kurian added that it would only be in the spirit of transparency if more companies are brought under the ambit of mandatory disclosures as a large number of workers in the small and medium enterprises which face less legal audits remain vulnerable.

“We have to think about workers at the lowest level such as shop floors or in factories,” she said. “Will a factory worker have the same redressal rights as someone in the top management of a listed company? It was shocking to see the Corporate Affairs Ministry turn down Maneka Gandhi’s request. It is only telling that in some parts of the government, more transparency by corporates is considered undesirable.”