After I returned from Le Cordon Bleu in Paris, I wanted to create something that would meld western desserts and Indian flavours. A flavour I chose was chai. Indian masala tea, or chai, is one of my favourite things to drink. I love the way we make it at home with ginger and lemongrass. We’ve had Chai Macarons on our menu, but these Chai Cupcakes are my absolute favourite. I hope you enjoy the recipe as much as I’ve enjoyed creating it. 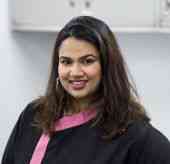 Pooja Dhingra is the founder of Le 15 Patisserie and Cafe in Mumbai. She opened her first café in Colaba in 2016 called Le 15 Café. Armed with a degree in hospitality from Cesar Ritz Colleges, Switzerland and a Patisserie Diploma from Le Cordon Bleu, Pooja returned home with the single goal of creating Parisian-style culinary experiences in India. She has been featured in national dailies and is a regular in fashion and lifestyle glossies not just for her abilities in the kitchen, but also as a dynamic businesswoman and inspiration to women – she was selected by Forbes India for their ‘30 Under 30’ achievers list for 2014 and the Forbes 30 under 30 Asia list.