My mother was a prolific cook and would regularly rustle up food from diverse cuisines. I learned a lot from her, including this recipe, which is very close to my heart. It is a kachchi biryani in that raw chicken is layered with rice and cooked together in dum, as opposed to a pakki biryani, where the meat is cooked first and then layered with rice. This biryani demands time and toil from its maker, but it is worth the effort.

For The Rice And Layering

Notes: a. Laying out the bay leaves at the bottom of the handi ensures that the biryani does not stick to the vessel. It also imparts a beautiful flavour to the rice.

b. Adding lemon juice to the rice while cooking prevents the grains from sticking and keeps them pristine white.

c. Ensure that you take out the bouquet garni and discard it. 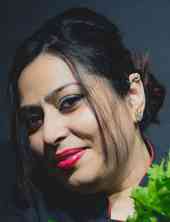 Reetu Kugaji is a chef, food blogger and a consultant to the food and hospitality industry.