A traditional Scotch egg is a boiled egg blanketed in sausage meat, rolled in breadcrumbs and then deep fried. I prefer to use pork mince but you can opt for chicken, if you like. In place of the sausages, you can use ham or bacon that is not too fatty. Enjoy with a spiced mayo, gherkins and other pickles or a salad. 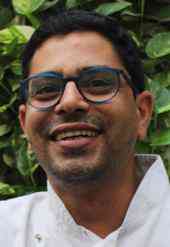 Viraf Patel, one of India’s most exciting young chefs, is Scroll Food’s Chef of the Month for July. His culinary adventures, which began fairly early in life, have taken him from Zur Rossweid in Zurich to some of the finest dining establishments in India. Over a career spanning 20 years, he has worked at, or consulted with, Indigo, The Table, The Tasting Room, Salt Water Grill, among other places. He was the Chef-Partner at Café Zoe, before joining Olive Bar & Kitchen in Mumbai as the Executive Chef. His food philosophy is rooted in his belief in truly honest cooking. With a deep knowledge of ingredients and applications, he works to make recipes relevant to our age.