We’ve spent more than 100 hours researching and testing virtual reality headsets to find the best options for any setup and budget. If you want a great headset with the largest selection of VR games and media that is comfortable enough to wear for extended periods, the Oculus Rift S offers a high-end VR experience at a reasonable cost (especially if you already own a PC). But if you don’t want to invest in a PC, if you want a headset that works with a smartphone or game console you already have, or if you just want a standalone VR headset, we have other recommendations. 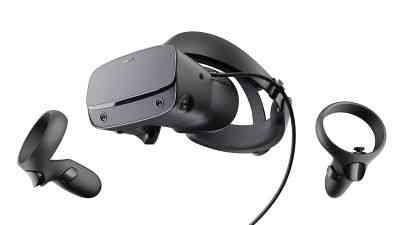 The Rift S pairs a quick setup process with comfortable controllers, plus great experiences for beginners and hardcore gamers alike.

Who it’s for: A PC gamer (especially one who already has a dedicated gaming PC) who wants the best VR image and audio experience and the most access to games and media.

Why we like it: The Oculus Rift S is the top pick in our review of the best VR headsets for PCs because it combines a comfortable, approachable design with the largest selection of games and other media. If you’re serious about getting into VR, a high-end PC headset like the Rift S is worth investing in. The jump in quality and tracking compared with that of a standalone headset results in a more immersive experience and better games. Of the desktop headsets we tested, the Rift S is the lightest and most comfortable (so you can wear it for longer). It has the most well-balanced and capable controllers, and it was the easiest for us to set up. Its default setup can’t track you across as large of a space as HTC’s Vive and Vive Pro PC headsets, but it still gives you plenty of room to pace around, unlike most mobile headsets, which require you to stay in place.

Flaws but not dealbreakers: All of the current high-end VR systems have some flaws in common: They’re expensive and awkward to use, they require a permanent tether to an expensive computer (though there are wireless adapters available for some), and by design they cut you off from the outside world while you’re using them. That’s unavoidable no matter which system you get right now.

Because the sensors are built into the headset, the Oculus Rift S can’t match the HTC Vive and Vive Pro’s accuracy while tracking movement around an entire room. And we also miss the original Rift’s built-in headphones; we recommend plugging in your own. 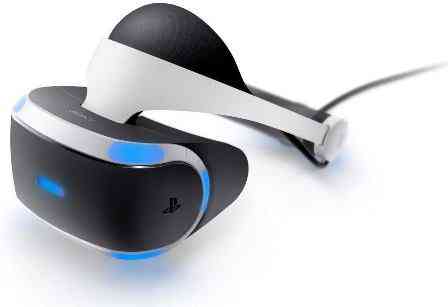 The best VR for PlayStation 4

While the PSVR system is more limited than PC headsets, it’s a good intro to VR gaming for PlayStation 4 owners. This bundle includes the required camera and two Move controllers.

Who it’s for: People who own a PlayStation 4 or PS4 Pro and want better VR image quality than a mobile headset can offer.

Why we like it: If you own a PlayStation 4 and you’re interested in getting a taste of virtual reality – or if you want to play some VR games without spending the money on a gaming PC and a high-end headset like the Oculus Rift or HTC Vive – Sony’s PlayStation VR is an easy recommendation. The PSVR headset is easy to set up, has a solid library of games, and performs well enough to provide VR’s wow-inducing sense of immersion in alternate realities, all without requiring you to buy an expensive PC.

Flaws but not dealbreakers: The PSVR system can’t track you as you roam around a room as effectively as its competitors from Oculus and HTC can. Turning your back to the PlayStation Camera obscures your hands so the camera can’t track your movements; since the PSVR system has only one camera, there’s not much you can do about that. The controllers aren’t as sensitive or immersive as the Rift or Vive’s, and we don’t like the included earbuds as much as built-in headphones.

You can play some of VR’s biggest games without cords or an expensive PC.

Who this is for: Gamers who are interested in a high-quality VR experience but don’t own or don’t want to be tethered to a PC, a console, or a Gear VR or Daydream-compatible phone.

Why we like it: The Oculus Quest, the best standalone VR headset, doesn’t require a tether to an expensive computer or gaming console. It’s simpler and better to use – and available to more people – than mobile VR headsets, which require you to use a compatible Android smartphone for their screen, processor and battery. The Quest is also one of the first standalone headsets that can track you as you walk around a room: You can move in any direction or tilt your head to the side or backward, and your virtual body will do the same. With its 1440×1600 pixels per eye, maximum refresh rate of 72 Hz, and Snapdragon 835 processor, the Quest represents a clear upgrade from our previous standalone VR pick and current budget pick, the Oculus Go.

Flaws but not dealbreakers: You won’t find as many gaming and VR experiences available for the Quest at the moment, but there’s still plenty to do. When you’re playing with friends, the battery may run down faster, and it’s also a little heavier than we prefer at 571 grams (1.26 pounds), but neither drawback particularly hinders the overall experience.

An inexpensive option that works with a smartphone: Samsung Gear VR 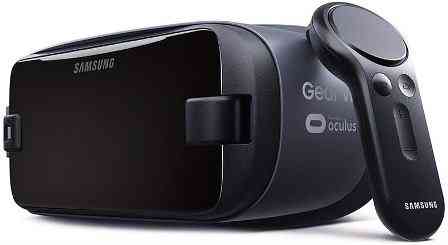 The best VR headset for your smartphone

If you own a compatible smartphone you can use as its guts, Samsung’s Gear VR headset offers almost the same experience as Oculus Go for less money.

Who this is for: People who own a Samsung flagship phone and don’t expect to spend enough time using VR to buy a desktop headset.

Why we like it: Mobile VR headsets like the Samsung Gear VR give you the same experience as the Oculus Go standalone VR headset but use a smartphone as their screen, which makes them less expensive if you already own a compatible phone. Like a standalone headset, they don’t tether you to a computer, and you don’t have to invest in an expensive PC or go through a complex setup process. The Gear VR works with Samsung’s popular Galaxy S and Galaxy Note phones and offers some of the best mobile VR games available, including Minecraft and Land’s End. The included controller, which tracks the position and location of your hand, also makes entry-level VR fun and approachable.

Flaws but not dealbreakers: Like a standalone headset, you can’t walk around while wearing a Gear VR headset, it only supports a single hand controller, the screen isn’t as large or crisp, and the games aren’t as good as a desktop VR headset. And unlike a desktop headset, a mobile VR headset doesn’t detect when you tilt your head or step around a room, so it just won’t feel as immersive or fun. And because it uses your phone as its guts, nobody can use your phone while you’re in VR, and it will burn through your battery in a couple of hours.

Among mobile headsets, Gear VR is not as universally comfortable as the lighter Daydream View: Some of our testers thought it fit the shape of their face well, while others found it sat too heavily on their face. And it’s only compatible with about ten flagship Samsung Android smartphones. Its competitor, the Google Daydream View, works with a different (but also small) list of phones.

The cheapest way to use VR: Merge VR/AR Goggles 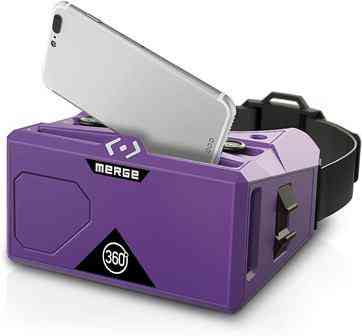 The cheapest route to VR

We don’t strongly recommend inexpensive mobile headsets because the image quality is so low, but the Merge VR headset is the comfiest and easy to adjust.

Who it’s for: People who aren’t sure they will use a VR headset more than a handful of times.

Why we like it: Among the seven inexpensive mobile VR headsets we tested, the Merge VR/AR Goggles offer the best combination of price, comfort and adjustability. They’re made of a soft, squishy foam that rests nicely on most face shapes. Sliding knobs – which double as buttons for interacting with virtual content – let you change the spacing between the lenses to suit your eyes. The headset also has a removable front section that exposes your phone’s camera, allowing you to use augmented reality applications. If you are more interested in augmented reality, an optional accessory called the Cube supports AR games and educational experiences. It is compatible with screens between 4.85 and 6.2 inches, which means it works with nearly all smartphones, including iPhones.

Flaws but not dealbreakers: The Merge VR headset is a big step up from the official Google Cardboard headset, but it’s cheaply made compared to the Daydream View and the Gear VR. The headset eventually begins to feel front-heavy and warm, and people with larger heads may feel that it presses into their face from the start.

Merge VR is compatible with the Google Cardboard ecosystem of apps, which generally use less processing power and do not communicate directly with the headset. As a result, they tend to look and feel lower in quality than those made for other categories of VR headsets. Despite there being an incredible amount of Cardboard content available, you won’t find apps that overcome this basic limitation.

Requirements: Any Android phone or iPhone with a screen between 4.8 and 6.2 inches