Contribute Now
Ad
Terminal 2 of the Chhatrapati Shivaji International Airport in Mumbai opens to passengers today. Ever since the facility was inaugurated by prime minister Manmohan Singh on January 10, the media has been filled with excitement about its shiny features: its numerous immigration counters, its swanky retail spaces and its landscaped areas. Singled out for special praise has been the three-km multi-storey Art Wall, with more than 7,000 artworks and artefacts from around the country.

The GVK-led consortium that runs the airport and built the terminal has described the display as "India’s largest public art programme”.

While a major art project should be cause for celebration in any city, the T2 museum is laced with tragedy. Mumbai residents cannot view these exhibits unless they buy an international air ticket. That, of course, rules out the vast majority of this city of 12 million. Even though the terminal is a public building (albeit one run by a private company), it is straining credulity to claim that this is an exhibition of public art.

Mumbai’s art scene could undoubtedly do with a boost. There have been no major cultural centres or museums since the National Gallery of Modern Art was opened in Colaba in 1996. The GVK New Museum is probably the first major investment in public art by the private sector since the 1920s, when the estates of the Tata brothers, Ratan and Dorab, donated their collections to the Prince of Wales Museum. The Museum, inaugurated in 1922, was the benefactor of large endowments from other individuals too, including Sir Cowasji Jehangir and Sir Currimbhoy Ibrahim. It has since been rechristened after the Maratha king whose name the airport also flaunts.

The Jaya He art walk at the T2 has been curated by Rajeev Sethi. It is divided into two sections. The arrival corridor consists of commissioned works that attempt to interpret Mumbai. As the curatorial note explains, the works "map the city as a layered narrative, unfolding page by page before the disembarking travellers".  The artists, including Alexis Kersey, Jagannath Panda and Gulam Muhammed Sheikh, worked closely with Sethi to evolve their individual concepts.

The second section of the project is mounted along a long wall, which passengers will pass on their way into different parts of the airport. The wall is divided into five sections: India Greets uses a wide array of symbolism associated with welcoming and protecting travellers; India Seamless is a set of installations that resulted from collaborations between contemporary artists and craftspeople from Kashmir, Tamil Nadu, Rajasthan and Bengal; India Moves utilises elements of Indian art that represent modes of travel; India Elemental has installations that represent Water, Fire, Space, Earth and Air, the elements of the Hindu creation myth; India Global features installations in which old and new objects are brought together to represent the constantly changing city of Mumbai; while India's Silent Sentinels contains architectural symbols of protection in traditional Indian builds. 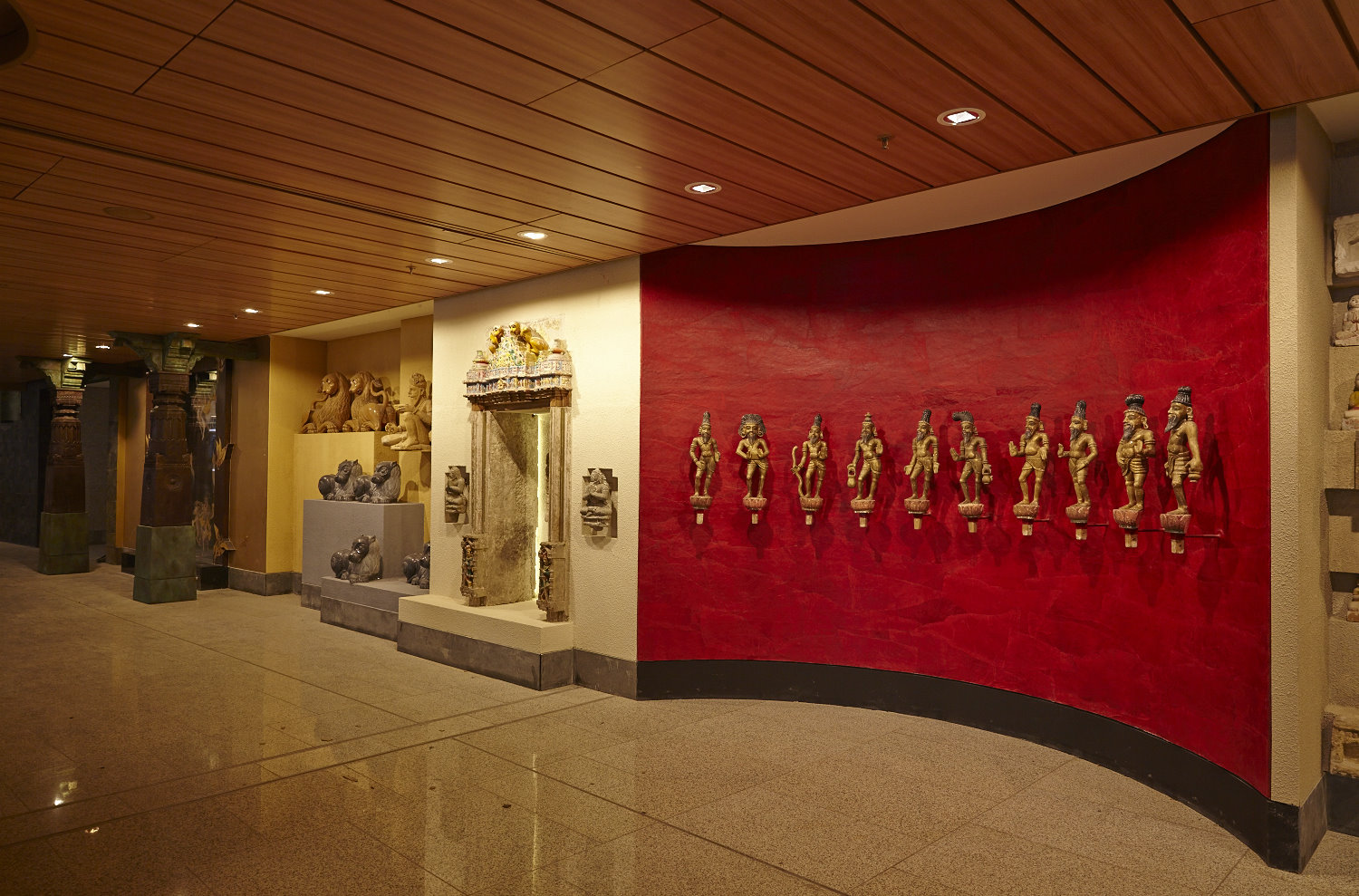 Wooden saints bless travellers on their journey at the Bus Lounge area; part of India Greets 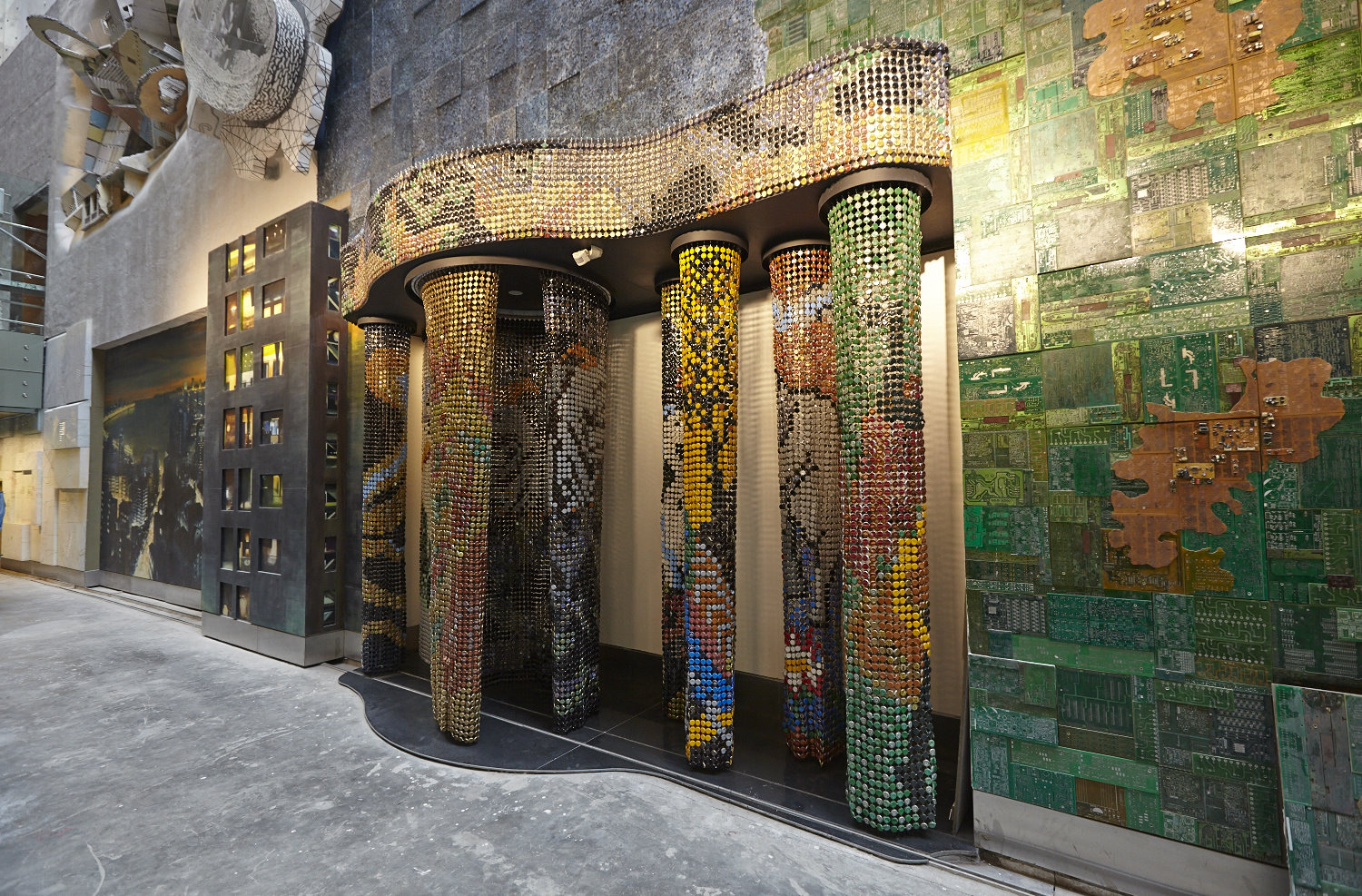 It’s all very ambitious and the project has resulted in many artefacts being preserved and restored. But as the exhibition stands, it’s a truer interpretation of Mumbai than Sethi probably intended: it wants to believe that an access-controlled, high-security area for the affluent can actually be passed off as a public space.
Support our journalism by contributing to Scroll Ground Reporting Fund. We welcome your comments at letters@scroll.in.

Eight vibrant images of Mumbai with a folksy Madhubani twist