Jun 04, 2014 · 06:49 am
Laurent Gayer
Every city has its back pages: its trivialities, so banal that newsreaders don’t pay heed to them, and yet so scented with local aromas, be it the reek of the gutter or the stench of the morgue. The French refer to these columns made up of filler items as the rubrique des chiens écrasés  (lit. ‘the column of ran over dogs’). In Karachi, Pakistan’s turbulent metropolis and one of the largest cities in the world, with a population estimated at 21.2 million in 2011, ran over dogs have been replaced by bullet-riddled bodies stashed in gunny bags (bori band lash), a trademark of the city’s three-decade-old armed conflicts, whose daily numbers are widely acknowledged as Karachi’s most reliable political barometer. Probably the most iconic artefact to have emerged from Karachi’s killing fields, the bori band lash also became a source of inspiration for painters and writers reflecting upon their city’s predicament.

As the body count kept on rising, from the mid-1980s onwards, Karachi’s poets, in particular, started mulling over the false sense of normalcy—the ‘apparent normality of the abnormal’—that went along this embedding of death and dis-order in the Karachiites’ everyday life. Since the creation of the country in the tumult of the 1947 Partition, poetry occupies an important place in everyday life and state-citizens interactions in Pakistan. This is particularly true in Karachi, which in the years following Partition became a predominantly Urdu-speaking city, with the arrival of hundreds of thousands of Muslim ‘refugees’ from India (the muhajirin, a Quranic term institutionalised by the 1951 Census, which was appropriated by the descendants of these migrants in the course of the 1980s, a period during which this population reinvented itself as the ‘Mohajirs’).

As Ralph Russell, the dean of Urdu studies, underlines, the traditions of Urdu poetry, and in particular of the ghazal, ‘are part and parcel of the whole outlook of the Urdu-speaking community’. In postcolonial Karachi, it became a key element in the cultural make-up of this migrant population, but also a channel of communication with the nascent state as well as a powerful tool of mobilisation. In the context of the housing crisis that affected the city after Partition, for instance, some of these refugees applying for ‘evacuee properties’ tried to give more weight to their request by including a few Urdu verses (by the late Mughal poet Mirza Ghalib, in particular) to their letter of application. In the following decades, poets provided successive generations of protesters with catchy, ironic or dramatic rhymes, challenging authority in various registers. And when Karachi was engulfed in a spiral of ethnic and political strife, from the mid-1980s onwards, Urdu poets were among the most prolific and incisive chroniclers of the city’s plight.

Zeeshan Sahil (1961–2008) was an avant-garde poet born in Hyderabad (Sindh) in a family of post-Partition Urdu-speaking migrants from India, who spent most of his adult life in Karachi. The poems gathered in Karāchī aur Dūsrī Nazmen (Karachi and Other Poems)  were written between May and August 1995, a year when political violence reached an unprecedented level in Karachi, with 1,742 killings, many of them politically motivated. Combining, in the words of one of their translators, ‘the child’s fairy-tale wonder and the adult’s hardened cynicism’, these poems convey the sense of fear that gripped the inhabitants of a city turned into a battleground for rival armed groups competing for votes, land, jobs and bhatta (protection money). Every morning, Karachi-walas would wake up to macabre news of more bori band lash—a practice that was apparently borrowed from the police by the henchmen of the political parties competing for control of the city.

Sahil’s simple, straight-to-the-point verses also suggest how, as in other chronically violent cities such as those of Colombia in the 1980s and 1990s, violence came to be routinised within a ‘chronic state of emergency’. By the mid-1990s, violence—even extreme violence, including massacres of civilians, acts of torture and mutilations—no longer belonged to the realm of the extraordinary for the residents of Karachi, but rather to that of the uncanny. Still strange and fearful, yet awfully familiar, violence was brought home—sometimes literally, for parents worrying at their sons’ political activities or at the possibility that relatives be caught up inadvertently in banal and yet potentially deadly incidents of rioting (hangama).

One illustration of this routinisation of violence was the ironical renaming of the violence-torn locality of Gulbahar (lit. spring flowers) as Golimar (lit. gunfire) by its residents. This act of renaming goes back to the colonial period, when the British opened a firing range in the locality. Today, most residents of Karachi are unaware of this, though. To them, ‘Golimar’ evokes the armed clashes that erupted here on an almost daily basis in the mid-1990s between the police and the militants of the Muttahida Qaumi Movement (formerly Mohajir Qaumi Movement— MQM), Karachi’s dominant party since the late 1980s, which claims to represent Urdu-speaking Mohajirs (who were thought to constitute around 44 per cent of the city’s total population in 2011).

As this act of renaming suggests, the residents of Karachi, especially in the most violence-prone localities, gradually became accustomed to violence. The savoir faire that they developed in the process was an instrument of social navigation in a dangerous environment, as exemplified by the use of codes by local entrepreneurs to carry on working in the city’s war zones. Knowing where to horn, turn the headlights on or flash the beam—signals used to distinguish friend from foe by neighbourhood militants—would make the difference between those living through the day and those ending up in a gunny bag.

It should be noted, however, that such chronically violent social configurations retain a part of uncertainty and a fluidity that prevent routines for the management of violence from evolving into a full-blown habitus. And while Karachi’s multifarious violence resembles that of some Colombian cities such as Medellin, in the latter case violence receded from 2002 onwards after the paramilitaries agreed to demobilise (out of fear of being prosecuted locally or extradited to the United States for their involvement in the drug trade). On the contrary, there seems to be no end in sight to Karachi’s conflicts. After a few years lull, political violence escalated once again from 2007 onwards and ‘target killings’ continue to make hundreds of victims every year, while ‘riots’—a somewhat misleading term that tends to depoliticise these short-lived but deadly forms of collective action—shut down the city on a regular basis, every six months or so, each time claiming dozens of lives.

For the residents of Karachi, including the barricaded city elites, violence has become part of the order of things. This is not to say that violence has become acceptable to Karachiwalas, but simply that they cannot imagine a future without it. This is for instance what Asif, a middle-aged Urdu-speaking resident of Orangi Town (one of Asia’s largest unofficial settlements and the epicentre of political and criminal violence in Karachi since the mid-1980s), replied after I asked him if he saw some end in sight to the violence affecting his locality: ‘No, I don’t see peace coming in the future... it will be very difficult... because most people don’t have any affection for each other [koi ek dusre ko pasand karte hi nahin, zyadatar]... so tensions will remain and the next generation will have to live with that.’

The lasting contribution of ‘political’ and ‘criminal’ violence—two categories that cannot be taken for granted—to the fabric of Karachi has earned the city the reputation of a ‘South Asian Beirut’, drifting towards chaos. As the memory of the Lebanese civil war faded away among audiences, this analogy was dropped in favour of a more global construction. Karachi earned the title of ‘the world’s most dangerous city’, attracting in the process a new blend of maverick journalists searching for a thrill and, if possible, a gunfight. This title was won in the most unfair way, as Karachi is only the most violent of the largest cities in the world, with a murder rate of 12.3 per 100,000 habitants in 2011 (still well behind smaller cities with a 100+ murder rate, such as Caracas and Guatemala City). Nevertheless, this reputation now sticks to the city and Karachiites them- selves sustain it by deploring the great ‘commotion’ (inteshar), the ‘chaos’ (khalfashar) or the ‘lawlessness’ (laqanuniyat) that prevails in their city.

And yet, despite this chronic state of violence, Karachi remains the jewel in the Pakistani crown: the first source of tax revenue in the country (it accounts for 54 per cent of central government tax revenues and 70 per cent of national income tax revenue, which means that it generates $21 million in daily tax revenues), it contributes around 25 per cent of Pakistan’s gross domestic product (GDP), handles 95 per cent of the country’s international trade, contributes 30 per cent to its manufacturing sector, and holds 50 per cent of its bank deposits. This enduring centrality of Karachi in Pakistan’s economy suggests that its chronic state of disorder has attained some degree of sustainability. Against media reports describing Karachi as chaotic and ungovernable, I argue that there is indeed order of a kind—patterns of domination, rituals of interaction, forms of arbitration—in Karachi’s ‘continuous civil war’. Far from being entropic, Karachi’s polity is predicated upon routines of organisation, interpretation and action that have made violence manageable, both at the level of the city at large and at the micro-level of its populations. Whether this state of ‘ordered disorder’ will remain sustainable on the long run remains to be seen, but for now Karachi works despite and sometimes through violence.

Excerpted with permission from Karachi: Order Disorder and the Struggle for The City by Laurent Gayer and published by Harper Collins. 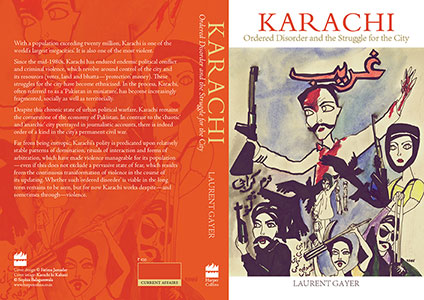