“If you are coming to Goa when the monsoon begins,” people said, when I called them before I set off to chase what turned out to be a chimera, “you must be here on June 24.”

“What’s happening then?” I asked.

“The São João festival! People wear coronets of wild flowers, get drunk and jump into wells.”

A Bacchanalian carnival? Broken bones, drunken fights? Could anything be more stereotypically Goan?

“But does it have anything to do with the monsoon?” I asked.

“Well, it happens during the monsoon.”

“That’s good enough. We’ll do our best to make it.”

Catholics across the world celebrate the Feast of St John the Baptist on June 24. This day, they believe, John kicked around in his mother’s womb when Mary was visiting because he knew Jesus was going to be born soon after him and wanted to indicate how happy he was. Only in Goa do they celebrate by jumping into wells.

Cecil Pinto is the local authority on the feast of São João, the saint's Portuguese name. São João is as much about rain as about religion, he said.

“Tourists think it is only about jumping into wells,” he said in Panaji the day before the festival. “But the prayers we say before that are for a good monsoon.”

People break coconuts after praying, down feni in liberal quantities, and jump into the closest water body they can find. The artistically inclined make crowns of fresh fruit and wildflowers and one large garland for the local cross.

This tradition is centuries old, but another ritual began 24 years ago: residents of Siolim village began to organise competitions to decorate boats and weave crowns from flowers. It is now a tourist attraction.

“They have made it into a spectator sport,” said Pinto. We decided to head there.

I had just introduced myself to Gomes with my usual spiel about how I was following the (hitherto non-existent) monsoon from Thiruvananthapuram to Mumbai. A young man with tightly curled hair and large sunglasses who was standing guard over a small blue-and-yellow canoe, Gomes seemed not entirely aware of what was going on.

We were only a few metres downstream of a small bridge across the Anjuna river at Siolim.

Groups of local boys from each ward band together, paint a boat, make huge sculptures, and on the day of the festival, float down the stream to a bridge, where judges evaluate the entries on a grand stage set up along the river side. Hundreds of flower-crowned residents, tourists and photographers thronged the bridge.

Brightly painted boats floated at docking points all along the river, loaded with enormous life-sized sculptures of prawns, crabs, shells and nubile mermaids. People restlessly waited for the water level to rise enough for the boats to set sail towards the stage. Our docking point, closest to the bridge, had two boats.

“So what connection does your boat have with water?” I asked Gomes, eyeing the chrome yellow array of empty plastic bottles arranged in the shape of a sunflower and a sun – an appropriate enough design for the blazing heat that day.

“The sun is the ultimate source of energy, you know,” he said. “We’ve been on a cleaning drive for ten Sundays now, and these bottles are everything we picked up.”

“But water?” I prompted.

“You know, it’s about cleanliness, man, that’s the thing about Goa,” he said. “We hate that Goa is getting so dirty. We want to convey this message to the public because garbage is just going beyond, you know.”

“Keep Goa Clean Live Happy, you mean?” I asked, reading the slogan emblazoned on a banner across his boat.

He straightened up a bit. He looked me in the eye. “Wow,” he said. “That is an amazing slogan right there.” 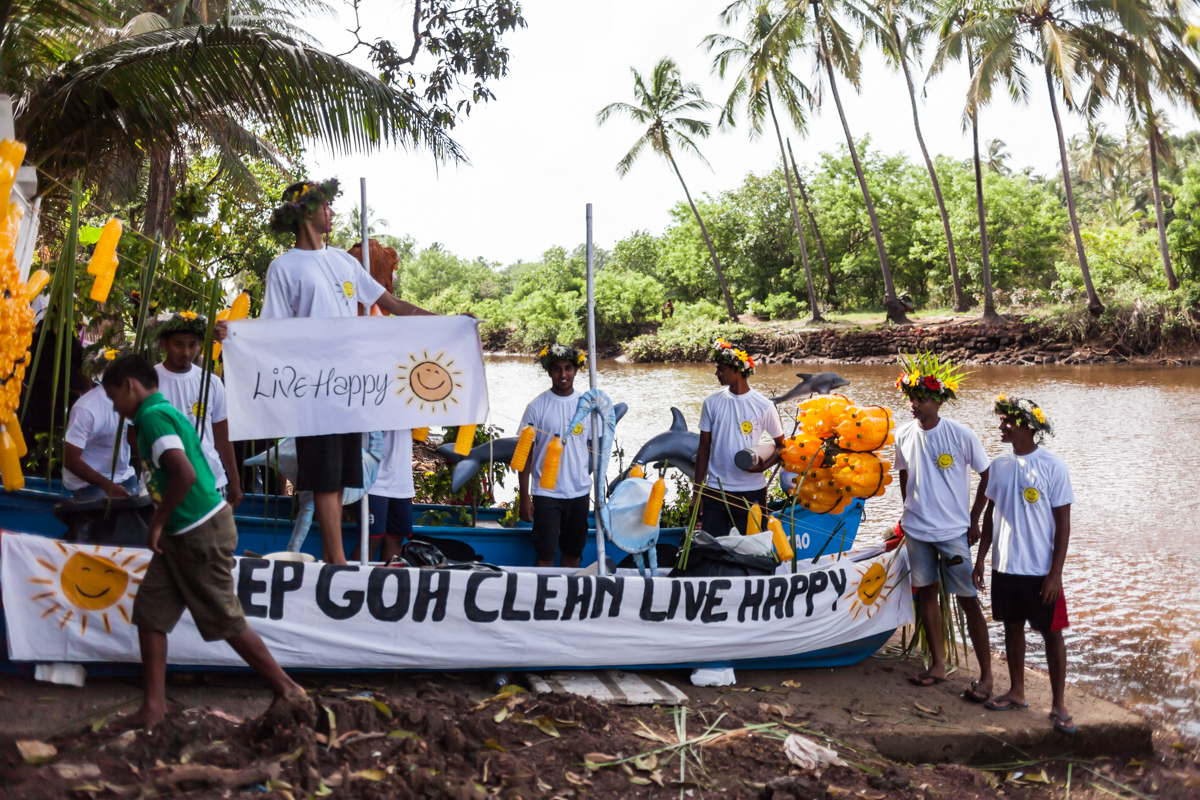 The boats, it turned out, rarely take more than ten days to decorate, or even less if there is sun, as there was this year.

The first boat is devoted to St John and comes from Baga, a village in the south. The Baga boat gets the privilege of being the first to garland the cross at the bridge.

“There hasn’t been enough rain this year,” said Odilon ('Call me Ody') Gomes, who was presiding over the mermaid boat. “So we are just waiting for the tide to come in.”

“How long will you wait?”

The boats usually set off at 4 pm, but because of the low tide, they waited until 4.30 pm. Then a man pointed out to me as Sylvester Fernandes, chief organiser of that wadi, led everyone in a brief prayer at a cross, shouted “Viva São João!” and lit a row of firecrackers.

With much scraping and hauling, the teams of the two Gomeses managed to get their installations into the river, only to find that it was too shallow even for their slight canoes. The water came up only to their thighs, so they hopped off and dragged it towards the stage.

The firecrackers also seemed to be a signal for other boats, all laden with sculptures, drunk young men and a few staid young women all chanting, “São João, São João! Viva São João!”

Much as we wanted to see whether either Gomes would be part of the winning team, we realised that if we stayed any longer, we would miss the other more authentic festival 20 km away in Aldona, where Pinto had invited us. 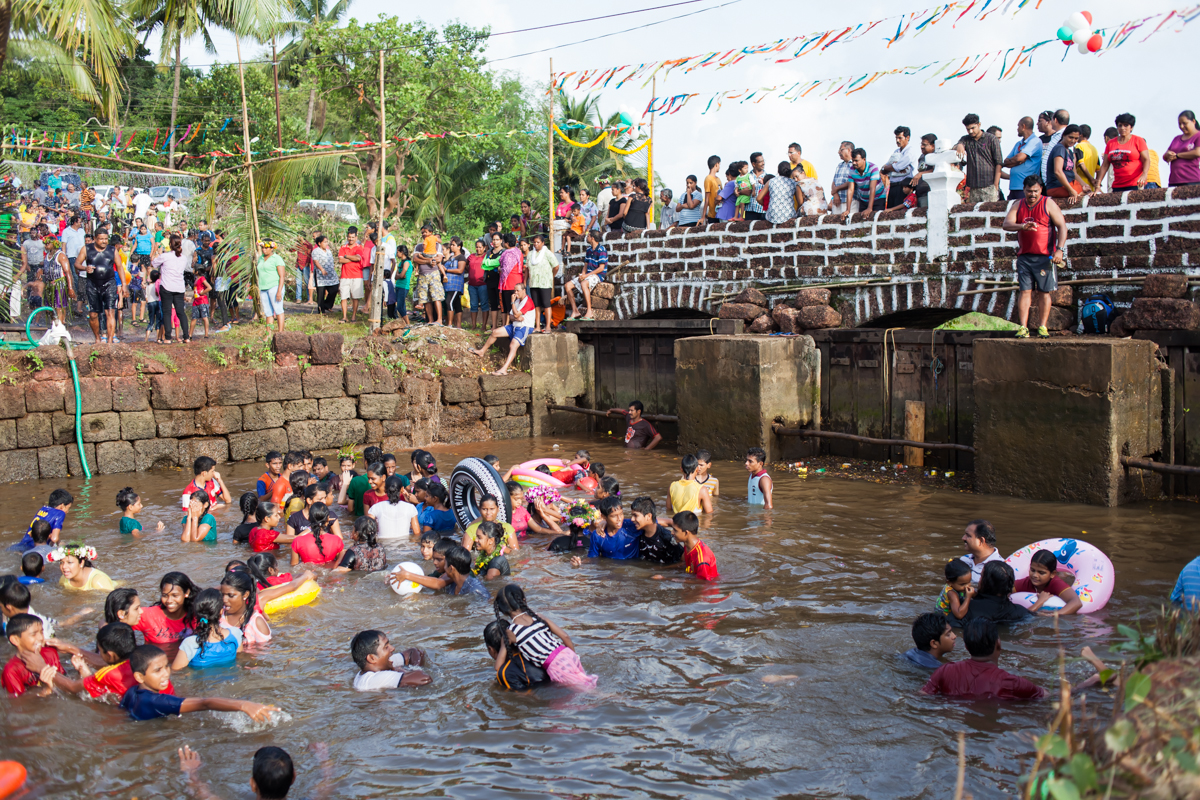 Aldona, as Pinto had warned us the previous day, had two festivals. The first, held along the walls of three sluice gates called Teen Manos, resembled a mela, with artificial rain pouring from sprinklers, loud music, finger food and plenty of people hurling themselves from a culvert into a stream. Every few feet, we ran into people blinking slowly, trying to staying awake despite feni pouring out of their ears.

Ignatius (“Everybody calls me Iggy”) Fernandes spoke morosely of how the new festival had spoiled his enjoyment of the traditional one.

“I kept so many crates of feni ready at home,” he yelled in my ear over the din. “But only a few people came, so I came here instead.”

“What happened to all that feni?” I asked, wondering whether he would have to down the bottles one by one over the next few weeks.

“Oh, I brought it here,” he replied. “Someone or the other will have it. Would you like some?”

I excused myself. Pinto was beckoning to us to hurry away to the place where his community was making its way to the local well.

We arrived a few minutes ahead of time, just before a long winding procession singing Goan mandos – Konkani folk songs – made its way to the field where the well was. 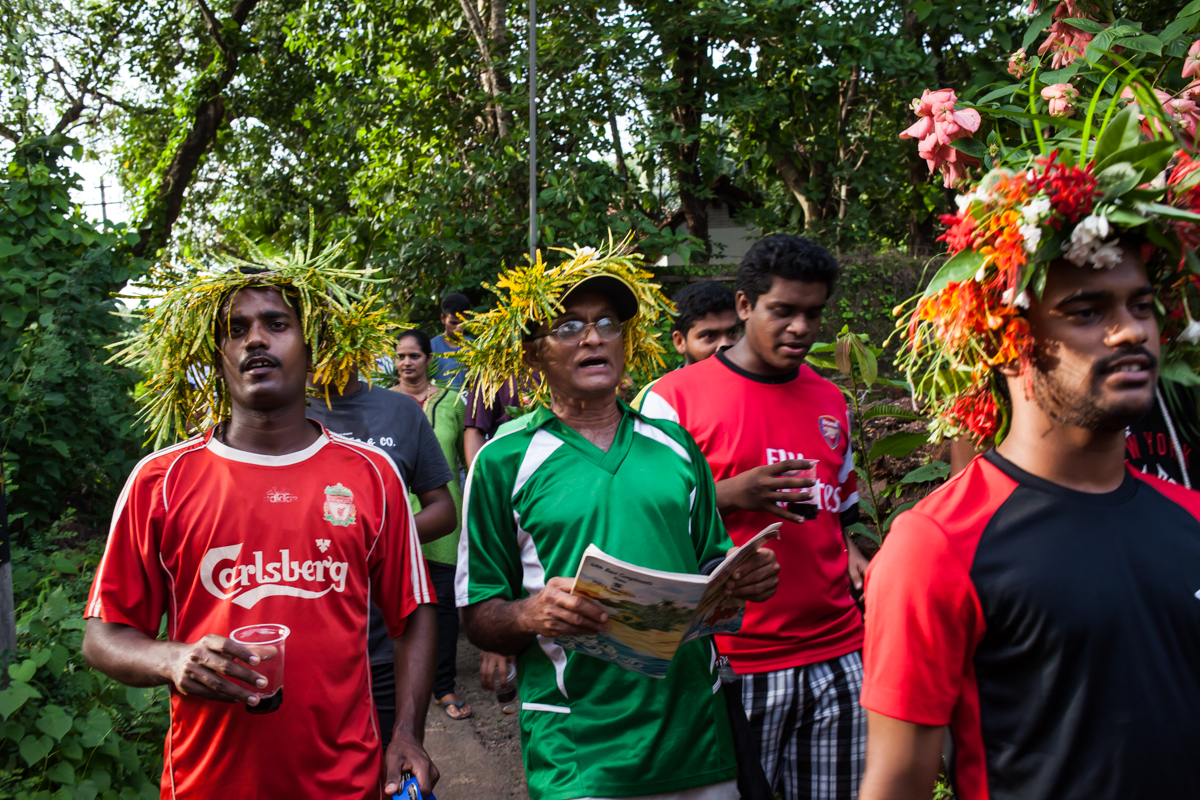 This, it seemed, was finally one of the places where the festival is celebrated traditionally, with mounds of jackfruit, mangoes, pineapples and bananas, port wine, feni, and in concession to juvenile tastes, a few Limca bottles.

The feast is traditionally celebrated for newlyweds, people with newborn babies, and those with new houses. The procession of around 150 people visits each of these houses, crowns the residents, sings songs and moves on. The food is donated by new sons-in-law of the community, unlike, some sneered, the festival at Teen Manos that asked for corporate sponsors.

After visiting the houses of those with new acquisitions, they wind their way down a narrow alley, through a field and then stop at the well.

In short order, people set up plates, men surrounded the well and began to leap in.

“What happens at Teen Manus is not São João,” said Francis, yet another Fernandes. “That is about four or five years old and they have sponsors. Our sons wanted to go there, so we told them to visit there first, but they had to come back here in time for our festival.”

About six years ago, said Francis, there was a possibility that the São João festivities here might stop because of a lack of interest. “But we will continue it anyway, as long as we can.”