Oct 07, 2014 · 12:30 am
Nivedita Khandekar
This year, in the parched district of Mahoba in Bundelkhand, in southern Uttar Pradesh, where persistent drought has led to large-scale migration over the past decade, several ponds were full of water even before the monsoon began.

These are ponds that farmers began building in March 2013 as part of the Apna Talaab Abhiyaan (Build Your Own Pond Campaign), which was started by local non-profits and activists from New Delhi, and supported by the district administration, with the aim of making farmers less dependent on the vagaries of the monsoon.

Most of these ponds, which filled up during last year's monsoon, retained water until March, while the larger ones had water even until it began raining again this year. By July, almost 400 ponds in the district had been constructed.

"Anupamji and his book inspired us," said Kesar Singh, a Delhi-based activist working in the district, when asked why farmers began this project. He was referring to Aaj Bhi Khare Hain Talaab (The Lakes Are Still Alive), written by Anupam Mishra, an environmentalist associated with the Gandhi Peace Foundation, who edits Gandhi Marg, a Hindi magazine published once in two months that propagates Gandhian thought. 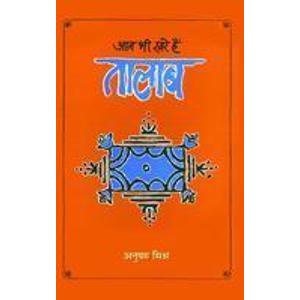 Twenty years after it was published, the slim copyright-free volume, written in lucid Hindi, has inspired scores of farmers, government officials and activists across the country to use a variety of simple methods to make their communities self-reliant in water. 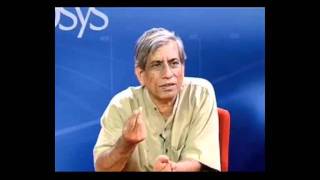 Traditionally, farmers who depended entirely on rainfall could grow only one crop a year. Only those who had their own water source, such as large wells or water bodies nearby, could plant another crop. In time, access to dams and canal networks, as well as tube wells that drew from groundwater, enabled many farmers to plant two to three crops a  year.

But in many places, the drawbacks of these these irrigation systems  became apparent. Villages sometimes constructed so many bore wells that the water table sank too low to make it economic to extract. In other instances, the water was contaminated. Dams and canal networks, for their part, came with enormous construction costs and displaced thousands of people.

Rather than inundating large areas, displacing people and then spending on transporting water from far away, Mishra realised that de-centralised methods work better in the long run. The simple but more effective method, he felt, ought to be: catch rain where it falls.

In his book, Mishra describes traditional methods that communities across India used to take care of their water resources. "The British introduced piped water systems and dams, and then the government took over water bodies, cutting communities off," Mishra writes in his book. "Unfortunately, after Independence, our planners did not rectify the situation."

For instance, in Rajasthan, a state with very little rainfall, communities always had kuis,
baolis and johads but have have atrophied over the years. Mishra and others like him stepped in to remind people to rediscover traditional practices.

Decentralised water storage systems can also be built in cities. "But Delhi and Mumbai does not care because these cities know they can bully resource-rich areas and get their water," said Mishra. "Yet they will also have to learn, sooner or later."

Mahoba is only of the more recent examples of a community becoming self-reliant in water after using the traditional methods mentioned in Mishra's book. Dewas in Madhya Pradesh and Lapodia in Rajasthan are two other, older examples.

In 2004, Lapodia and its environs in Rajasthan’s Alwar district were facing drought for the sixth consecutive year. While there was large-scale migration from most villages, Lapodia was spared because it had for more than a decade been working to revive two of its large tanks and developed pastures for its livestock near the water bodies.

It had done so with the help of Tarun Bharat Sangh, a non-profit working for water conservation and empowerment of communities in Alwar district. The group was founded by Rajendra Singh, who won the Magsaysay award in 2001, for his work on water conservation. He is all praise for Mishra's book.

"The book has an important place in today’s India when it comes to community-based water management," said Singh. "It offers insights into technical, social and cultural aspects, all three of which combined to spur the fabulous art of lake-building."

Other examples abound. Across India, more than 40,000 water bodies have been built spurred by the book, estimates Mishra. There are almost  2,500 lakes in the Thar desert area, Mishra says. Inspired by the book, four large tanks were repaired near Chennai, while the Karnataka Jal Sanghe renovated and constructed several ponds and lakes.

Mishra started thinking about self-reliance in water in the early 1980s, when he was travelling through Rajasthan. He was impressed by the several kunds, tanks and lakes in some places that he came across that were fully functional even in the scorching summer.

Soon afterwards, he travelled through Goa. There, he saw that the lush green paradise was slowly turning into a concrete jungle with resorts, hotels and private homes coming up in places that were catchment areas for water. There, he noticed that after the monsoon, water stocks decreased drastically. Tankers were needed to supply water to many villages as the groundwater had depleted rapidly after monsoon.

"I was impressed by the fact that a place such as Rajasthan that had such little rainfall had immense respect for every drop of water," Mishra said. "In contrast, Goa, where the rain god was sending a bountiful monsoon, was suffering due to faulty practices.”

The comparison set him thinking, travelling, meeting people and trying to understand what different communities were doing with water. In 1991, he started writing the book.

From day one, Mishra decided that the book would be free of copyright. Over the years, as more people discovered the book's value, they printed it themselves, some selling it for a profit, others for a cause.

So far, the book has been translated into a dozen Indian languages. Bharat Gyan Vigyan Prakashan, a Delhi-based publication house, brought out 25,000 copies in 1995, followed by publishers from Bihar, Gujarat, Madhya Pradesh, whose government also printed 25,000 copies, and Maharashtra.

Two years ago, Farhad Contractor, the founder of Sambhaav , a non-profit that that has promoted community-based rainwater harvesting in the Thar desert area for the past 25 years, printed it and gave several hundred copies to Mishra for distribution.

"We need to understand that not everything can be bought," Contractor said. "This book is basically communities' knowledge that we want to share. It has inspired and mobilised scores of people. We thought that it would be good if those who actually work on ground read it."