Contribute Now
Ad
Several years ago, during my weekly Friday visits to Mumbai’s infamous Chor Bazaar, I stumbled upon two unusual gramophone records issued on the Young India label. Made by The National Gramophone Record Manufacturing Company Ltd. Bombay, the saffron labels had the tricolour in the logo.

They contained two Hindi songs that were recorded in 1943  and were meant for private circulation. Sung by "The Yuvraj of Kashmir", one side had a song, Dheet Langar Nagar Nagar in Raga Desh, and the flip side had another melody, Hath Chod Sakhi, in Raga Mand. The song texts were written both in Urdu and Devnagri script. I bought the discs and played them. The childlike amateur voice was quite sweet. Many years passed, technology made many dreams possible and I found the same songs on YouTube uploaded by my collector friend Sunny Mathew from Kerala. I downloaded the video to my mobile phone for easy listening and to cite as an unusual example. 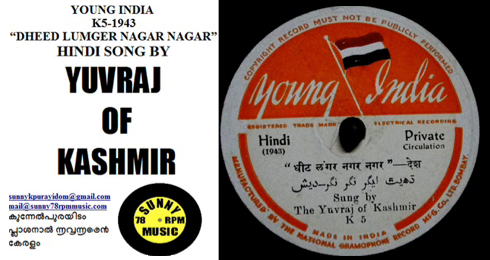 In 2013, I attended a seminar at New Delhi. Speaking on spirituality and philosophy, Rajya Sabha MP Dr Karan Singh talked about the importance of music in his life and how he learned music since his childhood. I suddenly recalled the disc label and the song in my mobile phone. During the seminar's tea break, I talked to Singh and showed him the video. He was quite surprised as he had not seen the disc in many years, although he had a huge collection of discs in Srinagar.

This brief meeting led to an invitation to visit Srinagar to digitise his personal collection of discs. I learned that the discs were made by the Young India company engineers in Singh's house in Bombay when he was 12 years old. Maharaja Hari Singh and his family used to spend some time in the city on vacation. Prince Karan Singh was taking lessons in vocal music from a local teacher. Chandulal Shah of Ranjit Studio, a family friend. He listened to the sweet voice of the prince and organised these special recordings. 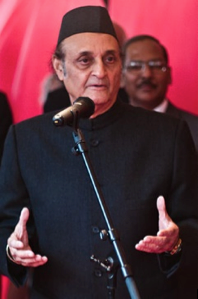