Contribute Now
Ad
Bankim Chandra Chatterjee's poem Vande Mataram has had a long and contentious history, ever since it was sung at the Congress party's annual convention in 1896 by Rabindranath Tagore. Since some Muslims found the poem's other cultural impulses to be Hindu, the party eventually decided to truncate the poem to only its first few lines.

Despite the debate over it, the poem has always been popular in Bengal. During World War II, for instance, at the suggestion of Indian National Army leader Subhash Chandra Bose, Bengali music director Timir Baran Bhattacharya set the poem to music in Raga Durga ‒ the name of goddess of war. The Indian National Army, which aimed to secure Indian independence with Japanese and German assistance, frequently broadcast this version of the tune over Singapore radio, where Bose had established his base.

Female voices are quite prominent in the recording, which is in the style of a marching song. 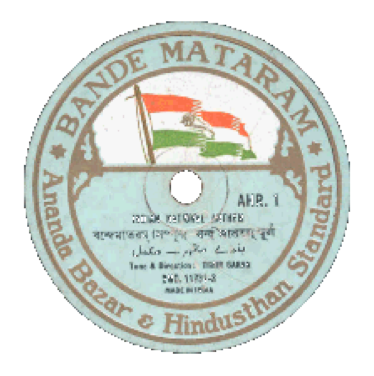 The flip side of this disc has an instrumental version of the patriotic tune. This recording was played during Indian National Army parades.

In 1945, four years after Rabindranath Tagore's death, his melody for Vande Mataram was recorded by Visva Bharati Music Board. This was a ten-inch 78-rpm disc with three stanzas. The singers were Jaganmoy, Diwjen, Debabrata, Niharbandhu, Suchitra, Kanak Das, Supriti Ghosh and Geeta Naba.

The flip side of this disc had an instrumental version of the song.

The record was released at the height of the Independence struggle, and these tunes became very popular as they were sung by crowds at public meetings and protest marches.

In Maharashtra, Master Krishnarao Phulambrikar also composed a melody for the poem in 1945 so that it could be sung at meetings and played by a band. The marching version was composed with the help of Bapurao Datey of Rashtriya Swayamsevak Sangh. When composing the music, the two would go to the police parade ground in Pune and study the footsteps of the marching men in an attempt to find the most appropriate rhythm for their tunes.

This is the third part in the series on Vande Mataram. You can listen to Part I here and Part II here.

When Bollywood maestros collaborated to put a Gandhi prayer to melody