Contribute Now
Ad
Soon after Devendra Fadnavis and his nine ministers took their oaths of office at a lavish ceremony at Wankhede Stadium in Mumbai, their supporters attacked detained pro-Dalit protestors packed into a police van outside the venue. The activists, who wanted to draw attention to the recent murder of three members of a Dalit family in Ahmednagar, were attacked with stones and water bottles.

About 30 or 40 protestors belonging to the Republican Sena, headed by BR Ambedkar's grandson, Anandraj, had gathered on Marine Drive, near the stadium, around 4 pm, just as the ceremony was beginning. The Republican Sena members were quickly bundled away by the police and did not attempt violence and as they were shoved back and forth into vans. They continued to shout slogans against Prime Minister Narendra Modi and the government, waving pamphlets detailing the Ahmednagar killings from the windows of the vans.

The situation got heated after the ceremony ended, as BJP supporters began to swarm out on to Marine Drive. They first began to shout pro-Modi slogans in an attempt to drown out the voices of the detained Republican Sena members. When that proved impossible, some of them began to throw stones at the van, and then bottles of water.

The police eventually managed drive away, after which the crowd subsided.

The protest was coordinated by the Dalit Atyachar Virodhi Kruti Samiti, an umbrella organisation that has around 40 Dalit political parties and institutions as members in Mumbai. Participating groups included the Ambedkar Party of India and a human rights group called the Ambedkar Centre for Justice and Peace, neither of whom raised slogans, but merely displayed banners.

Activists with the Dalit Atyachar Virodhi Kruti Samiti claimed that 500 of their supporters were detained for four hours before being released. The police refused to confirm this.

“The Samiti decided to do a dharna today parallel to the oath ceremony because we think it is shameful that they are not bothered with the atrocities happening now in Maharashtra,” said Harshali Potdar, a member of the Samiti. “We need to express our anger and sorrow, which is why we were there.” 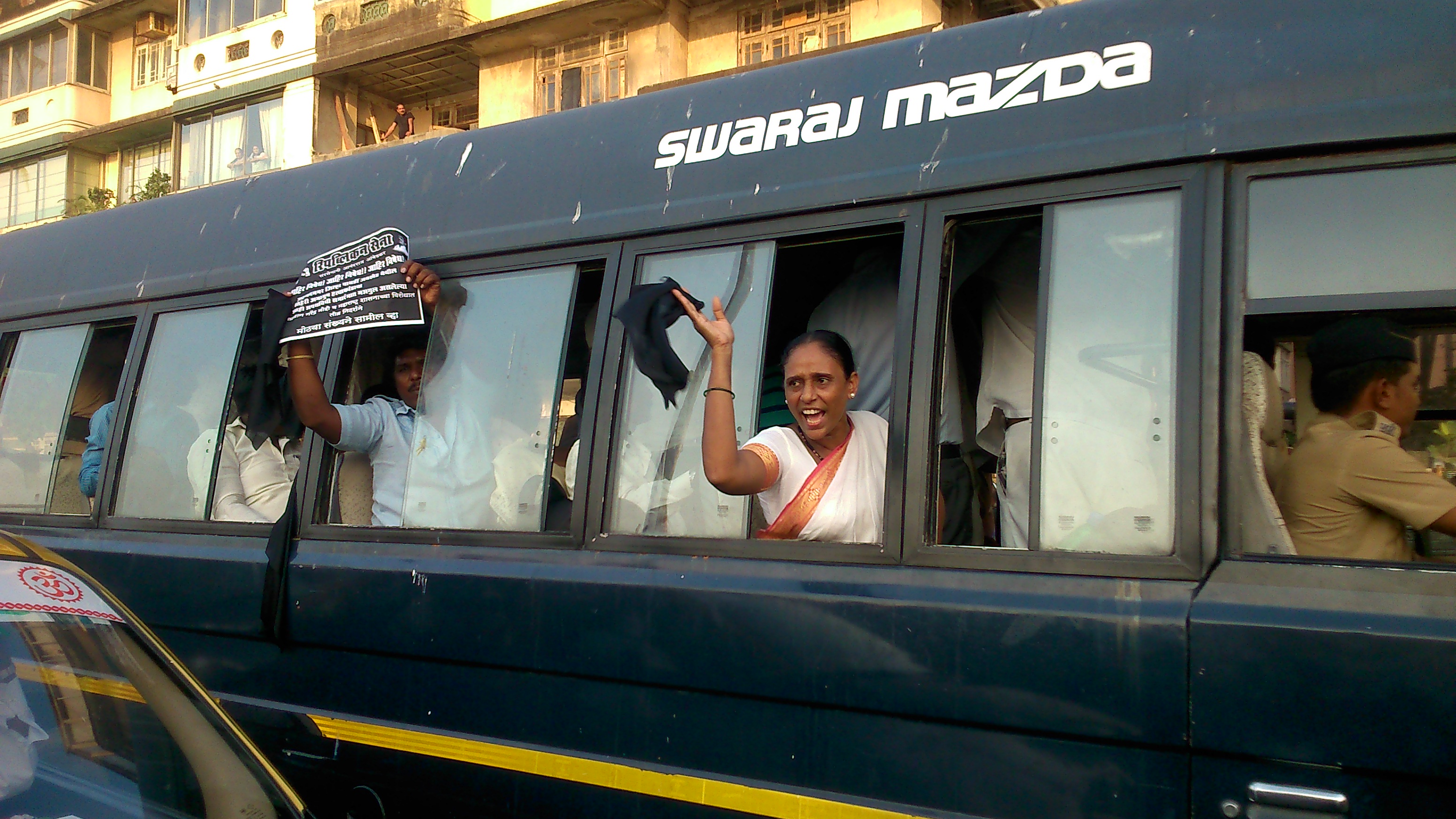 The first hint of the protest came when three men of the Mumbai-based Ambedkar Party of India strolled along Marine Drive at around 4 pm, when the ceremony had just begun. Police officers, who were out in full force, quickly and quietly bundled their flags away and attempted to direct them into a nearby police van. When they continued to argue, an officer hailed a taxi to take them to the nearest police station.

The Ambedkar Centre for Justice and Peace, a non-political human rights group, was also present. On their phones, they had photographs of the hacked bodies of the three Dalits killed in Ahmednagar. 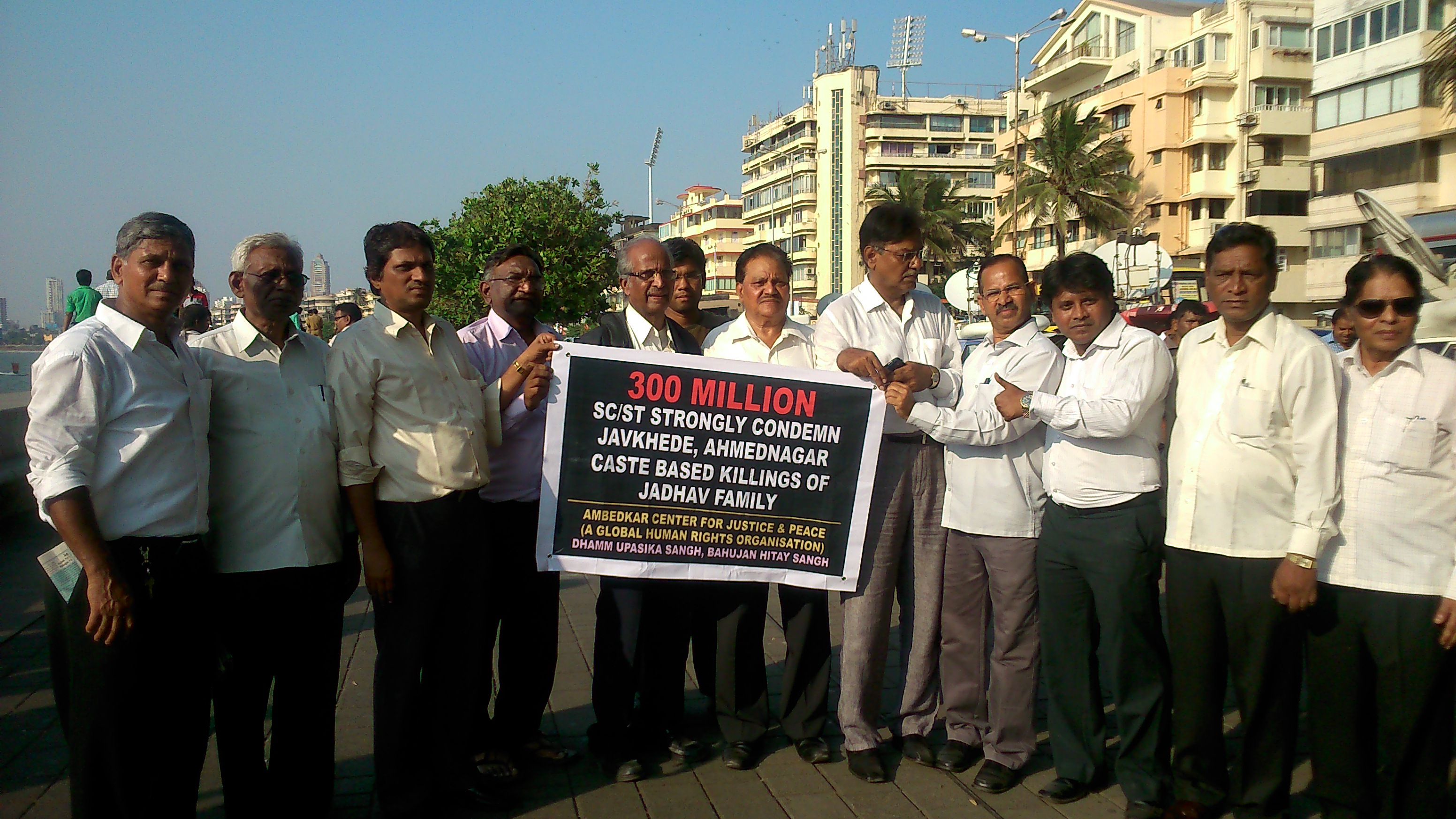 “This is the third lynching of that family in recent times,” said Jayawant Maruti Pawar of the Ambedkar Centre. “This is a heinous crime and sinful to society, but no other community has given any support. The message given out is that if you are of the lowest caste, you should not expect to rise in society.”

“We will see what this government does,” said a retired sessions court judge, also with the Ambedkar Centre, who asked not to be named. “We are not against any political party.”

He added sardonically, “We give our best wishes to the new chief minister. He is young, dynamic – a fine man.”

Four reasons Nitin Gadkari thinks he should be Maharashtra's next CM