Contribute Now
Ad
Weeks after the Ministry of Home Affairs released figures saying that nearly 600 people had been arrested in 2014 under Section 377 in 2014, India’s queer community is cautious in its response.

On December 23, the home ministry presented data on all those arrested and charged under Section 377, which criminalises “sex against the order of nature” between January and October 2014, in response to a question by All India Majlis-e-Ittehadul Muslimeen MP Asaduddin Owaisi.

According to the data, 778 cases had been registered and 587 people had been arrested in this period. However, the charts are incomplete, as all states had not yet submitted their data for this period to the National Crime Records Bureau.

“This report might be accurate in terms of people arrested under Section 377, but 377 is used largely for non-consensual sex even with minors,” said Danish Sheikh of the Alternative Law Forum. “We don’t know how many of these cases are against consenting homosexuals.”

Vijay Hiremath, a lawyer working on the queer community’s issues in Mumbai, agreed.

“Unless they give a breakup of how they came up with this figure, I think we cannot say if there has been an increase in the prosecution of the community,” he said. “We need to analyse this by first information reports.”

In the ministry note, Maharashtra, for instance, had arrested 100 people under the section in this period, a sixth of the total number of arrests. Hiremath said it seemed highly unlikely that this could have happened without coming to the attention of activists.

“We don’t know if the police is silently taking action in districts,” he said. “We will really have to explore that.”

Since the Supreme Court judgment, there has been increased visibility of cases of persecution of the community. There has also been a change in how the section is now used. Blackmail has now become common.

“Earlier, Section 377 was used in terms of persecution, not prosecution,” said Sheikh. “Prosecuted cases are one kind of statistic. Persecution is another. People have used it to harass others with the threat of exposure.”

Akkai Padmashali, founder of Omdede, a transgender rights groups, said that there has been an increase in phobic attitudes since the the Supreme Court judgment. In Karnataka, 43 transgendered people have been arrested under different charges in the last four or five months. Five transgenders just sitting in Cubbon Park were arrested under 377.

“We are blackmailed by people in the public sector,” she said. “If you are a homosexual person sitting in a park, they demand that if you don’t give them money, they will tell your parents. Now they threaten to go to the police.”

Hiremath also pointed out an increase in the number of extortions, with four cases coming to him just from Mumbai in the last year.

“There is a provision under the Indian Penal Code where it says that if you try to extort money by threatening people with Section 377, you can get punishment up to life imprisonment,” Hiremath said. “Now in two of these cases, they have not applied this section to the offenders.”

A few months ago, a person paid Rs 10 lakh as extortion money before finally approaching Hiremath for help.

“I have been handling extortion cases for some time now, but people have never had to pay this amount,” he said. “People would usually ask for a gold chain or an expensive wristwatch. This also shows that the fear perception in community has increased.”

Who is being charged?

It is not yet clear whether the increase in numbers has to do with increased prosecution of the homosexual community or the continued application of the section to instances of child abuse.

Before the Protection of Children from Sexual Offences Act of 2012, the police charged child molesters under Section 377. The ministry holds no data for how often this section is still applied to them.

The ministry claims in its note that this is the first time the National Crime Records Bureau has begun to collect this data, but it has previously provided similar information on request. In 2006, activist Jyoti Puri published a report with data on the number of first information reports filed under Section 377. 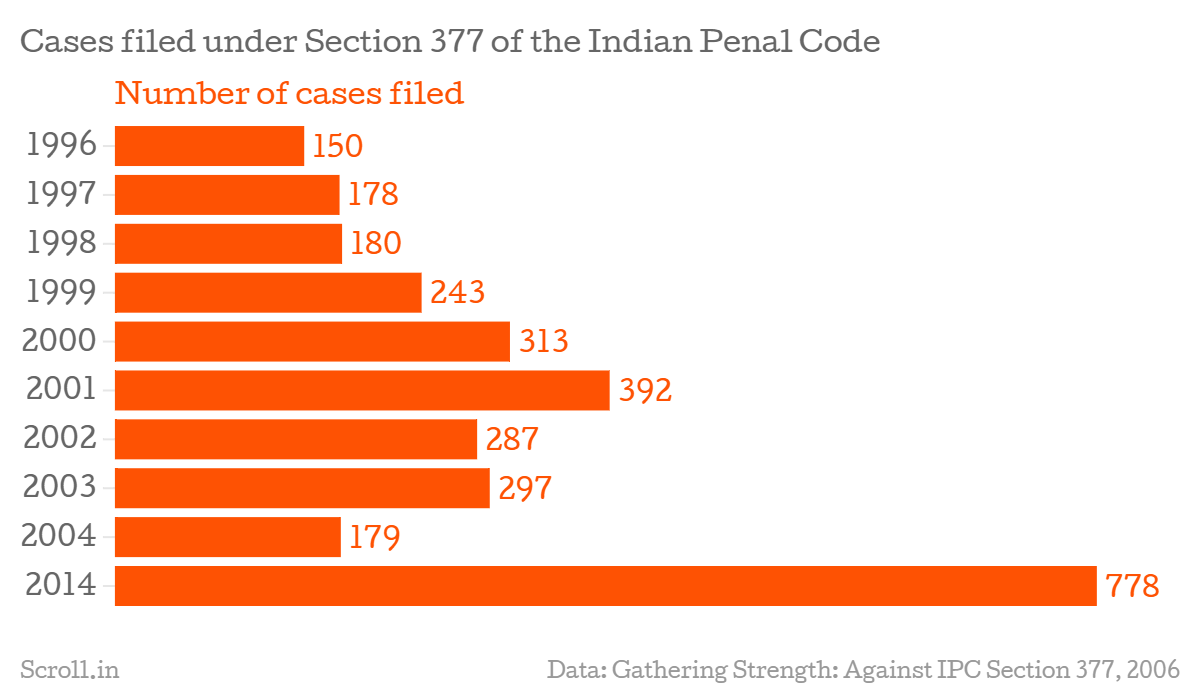 Many of these cases, according to Puri’s study, had to do with instances of child sexual abuse.

“If a third of the number of cases between 1996 and 2005 has been achieved within ten months of a year, there has been a clear escalation in the number of cases,” said Sheikh. “We just cannot identify how much. Something is happening, but until we have a breakup of the figures, we don’t know what it could be.”

A crucial part of the Supreme Court judgment in setting aside the High Court verdict centred around the perceived size of the community. It noted that as per reported orders, not even 200 people had been prosecuted under Section 377 in the last 150 years. This number might now come into question with the ministry’s new data.