Contribute Now
Ad
Another Vibrant Gujarat, another set of eye-popping numbers. Narendra Modi may no longer be chief minister of the western state, but the investment summit he dreamed up continues to expand at a rate that is scarcely believable. Gujarat Chief Minister Anandiben Patel announced on Tuesday that more than 21,000 Memoranda of Understanding were signed at Vibrant Gujarat, with a promised investment of nearly $400 billion or Rs 25 lakh crore.

To put that in perspective, one could look at the recently concluded business summit of West Bengal, which mustered less than a tenth of that amount, or a similar event held last year by Madhya Pradesh, which garnered only about Rs six lakh crore. Indeed, there is no question that Vibrant Gujarat, at least in terms of promises has become what the state government likes to sell it as: the Davos of the East.

But promises are one thing, actual investments are another. The Economic Freedom of the States of India 2013 report, put together by the Cato Institute and Indicus Analytic, estimated that only about 8.5% of announced investment actually turns into real projects. The Indian average, according to the report authored in part by Bibek Debroy, who was recently appointed to Modi’s Planning Commission replacement body, was around 6%, with other states likes Uttar Pradesh and Haryana posting better numbers than Gujarat.

This means that while the numbers announced at summits like Vibrant Gujarat are great at generating publicity, especially when accompanied with Davos references, they are not a sure-fire way to ensure actual economic growth.

To illustrate this, if you combined all the investment promises made at Vibrant Gujarat events since the first one in 2003 (with an estimate for 2013, when the state chose not to announce an official number), they would nearly come up to the entire Gross Domestic Product of India for 2013. If this were true, one would expect Gujarat’s contribution to the economy to be far ahead of the rest. Though it is one of the better performers, the state still only contributes about 7% to India’s total GDP.

Again, as a way of putting this number in context, one could look at Foreign Direct Investment inflows over the years that Vibrant Gujarat has been held. While not all the Memoranda of Understanding signed at the summit are from foreign players, a key reason for the event’s creation was to ensure that Gujarat remained an investment destination in the aftermath of the earthquake in 2001 and the riots in 2002. In the early years, the promises made seemed somewhat in line with the overall FDI inflows into India. But the numbers have ballooned since then, and seem out of sync even when you take into account that not all the projects would see immediate investment. 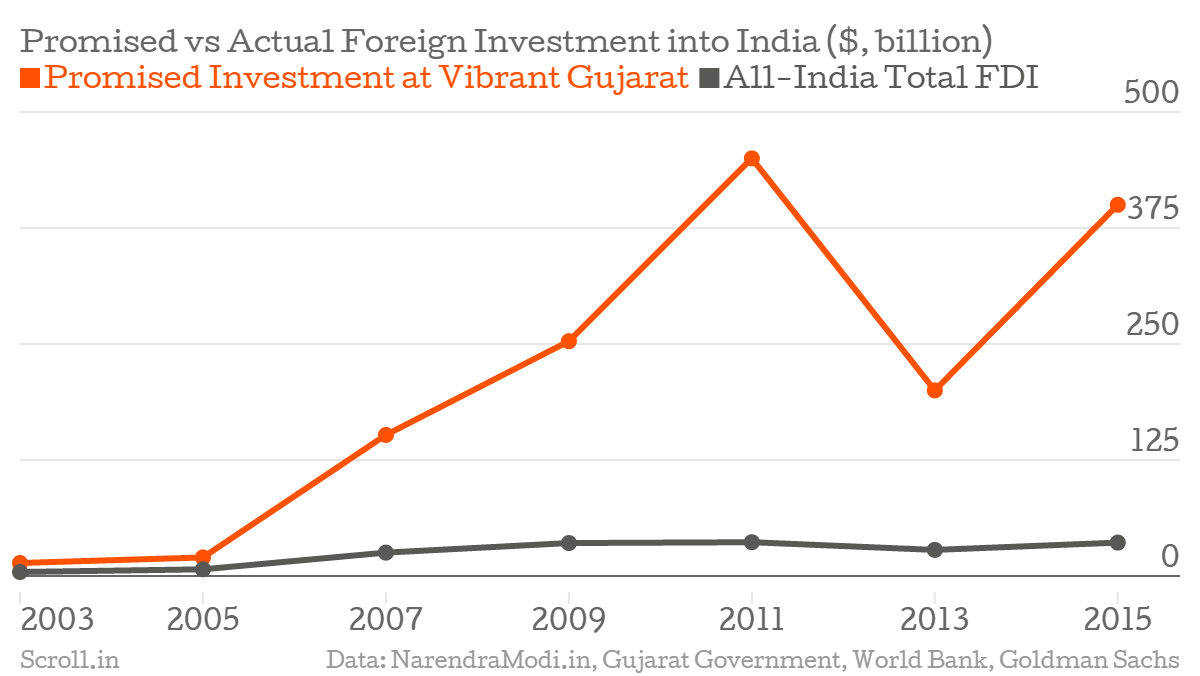 The state itself acknowledges this. In 2013, it chose not to publicise the amount of money promised in investments at that year’s summit. It has also made it clear that it intends to move from Memoranda of Understanding to Letters of Intent, which are more reliable instruments to suggest intended investment. In addition, there has been much talk of leveraging the reputation that Vibrant Gujarat has earned and turning it into a platform for networking and information sharing, rather than simply focusing on investment numbers alone.