Contribute Now
Ad
The Delhi elections might have captured the attention of the nation or at least the news bulletins, but it’s actually a very local contest. This is a fight for 70 legislative assembly seats that don’t even carry all the trappings of power that a usual state house does. And for all the talk about national issues and Indian politics, the vote might just come down to much more local issues or even simply turnout on election day.

Consider this. The most closely fought seats in the equally high-profile assembly polls in December 2013 came down to a margin of under 2,000 votes. A careful look at these constituencies reveals that out of the 10 with the closest margins, seven involved Bharatiya Janata Party candidates losing out to others, in most cases the Aam Aadmi Party contender. 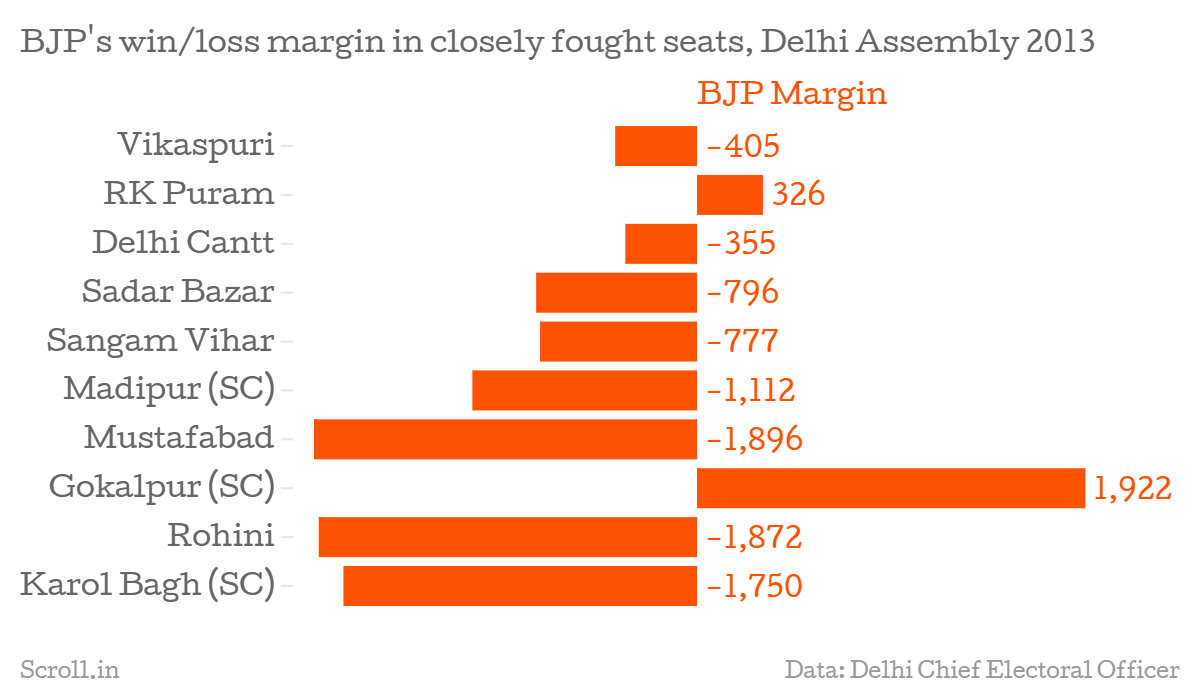 In only two cases in the top 11, RK Puram and Gokalpur, did a BJP candidate end up as a winner but with only a tiny margin of votes. The saffron party’s candidates were more likely to win comfortably, with the final results in that election giving the BJP the most number of seats even though it didn’t end up forming the government.

And all this was before the Narendra Modi became prime minister, the Aam Aadmi Party suffered a self-inflicted fall from grace and the BJP brought in respected activist Kiran Bedi as its chief ministerial candidate. The combination of those factors should all serve to boost the BJP’s tally, both across the board as well as in specific seats where the margin of loss was small.

The addition of former Congress minister Krishna Tirath into the party is also significant. Three of the seats where the margin was the smallest were reserved seats, and with both Udit Raj and Tirath in the party, the BJP has made its emphasis on Dalit voters, who form 20% of the electorate, loud and clear.

So there you have the game plan of the BJP to address everything that was missing from the 2013 campaign. Modi as prime minister. A strong, well-known chief ministerial face. A partially discredited Aam Aadmi Party. And a more thorough focus on Dalits and the urban poor.

Yet, despite all this, it seems that the BJP might still face a tough task, at least if you go by opinion and snap polls released so far. An ABP-Nielsen snap poll suggested that the populace is still evenly divided between the AAP and the BJP, with Kejriwal getting support from just one percentage point more than those who would prefer Bedi.

Meanwhile, a NewsNation in-house opinion poll actually gave the BJP and its ally, the Shiromani Akali Dal, fewer seats in the upcoming elections than it had garnered in December 2013, suggesting that AAP would be the one taking the lead, though still with a hung house.